RUSK COUNTY - The musky Paul Parise boated on Oct. 6, 2010, from the lower Flambeau River in Rusk County is truly the rarest of the rare: a 51-inch albino musky. 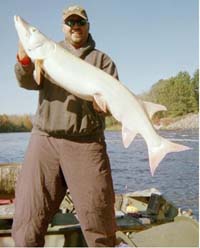 "That is a pretty fantastic catch," says Tim Simonson, co-chair of the Department of Natural Resources musky committee. "Albino musky are pretty rare to begin with, and for one to survive to that size is pretty uncommon given they don't have the protective camouflage to hide from predators or sneak up on prey. This fish stood out from day one, but through luck and maybe some skill, it survived."

The fish is the second albino musky to surface in Wisconsin waters in recent years. In 2005, a DNR fisheries crew caught a white musky in their fyke nets during population surveys. But that fish was much smaller -- 32.7 inches long and 7.9 pounds at the time.

Albinism is a heredity condition in humans, other mammals, birds, fish, reptiles and amphibians, in which there is a total or partial lack of pigment that gives color to the skin, hair and eyes.

The growth and development of an albino is the same as that of a normal individual. They also have the ability to reproduce offspring.

The complete story about Paul Parise's unique musky catch and release will appear in the December 2010 issue of MUSKIE Magazine, the official publication of Muskies, Inc. [www.muskiesinc.org] (exit DNR).