MADISON - With the Sept. 30 close of the inland trout season fast approaching, anglers will find they enjoy some of the best trout fishing of the season, state fish biologists say.

"It's been a tough summer to be out trout fishing because the heat and the humidity, but the next few weeks should be fantastic," says Larry Claggett, Department of Natural Resources cold water ecologist.

"Every stream I see is flowing above normal but not flooding, and that creates good habitat, abundant food, and cooler water temperatures, which means the fish are going to be a little more active again." 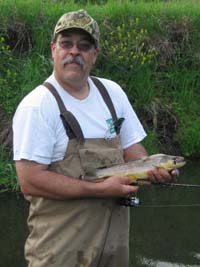 Claggett says DNR fisheries surveys are showing good trout populations, and fish managers are telling me "the fishing is as good as it's ever been."

Dave Vetrano is one of those fish managers who believes the fishing's never been better. He's been working for 30 years directly on improving fishing in western Wisconsin counties of Crawford, Vernon, Monroe and La Crosse.

"Because of the abundant rainfall we have base flows far higher than what they have ever been. Our streams are in the best shape ever from a fisheries standpoint."

Vetrano says that the high water levels this year, as well as the flooding in 2008 and 2007, have benefitted trout populations and anglers.

"There's a misconception that the water just blows the fish out but in reality they hunker down and as long as they don't get moved by a big log that pushes them out, they try to find the low current areas and they'll be just fine."

The flood waters scour the sediments from the river beds, revealing the cobbled substrate that the trout need to spawn. "We've seen a tremendous increase in recruitment and young of year and increase in the invertebrate populations, so for all intents and purposes, the fishing is the best it's ever been."

Vetrano cautions that anglers will want to watch stream flows carefully, and wait until the water comes back down in a stream and clears up a little. That doesn't take long in western Wisconsin, where the stream flows rise and fall quickly, sometimes within 24 hours.

"The trout are sight feeders. They can't see the lure. The best fishing is just as water starts to get a little dirty or a little clear. In that interim, that's the time to get out. They go on a major feed. Depending on the rain event, they may have not eaten for two or three days."

"The brown trout and brook trout are fall spawners so they will be thinking of moving upstream so often times you can find some big fish in spots you might not normally find them," Miller says. "The fish should start stacking up close to these smaller tributary streams, smaller streams."

Fish managers responded to a last-minute request for condition reports on streams in their areas headings into the last few weeks of the inland trout season. Below are fishing reports from those able to respond. More information about fish populations are found in the Wisconsin Fishing Report 2010. Look for the county listing for the water you want to fish.

Trout maps, trout stream classifications, and more can be found on Wisconsin Trout and Salmon by scrolling to the "Locating" section.

Summer rains in the northern part of the state have restored stream flows, which have been very low during several years of protracted drought. These rains have not recharged the groundwater sources yet so the benefits might be temporary. However, higher stream flows and cooler temperatures should reduce angler concerns about handling stress to trout caught in this final month of the season. - Steve Avelallemant, regional fisheries supervisor, Rhinelander

Water levels on trout streams in northwestern Wisconsin are generally back to normal after several years of low water from drought conditions. Better trout fishing will be found near the headwater areas of local trout streams as trout stage for fall spawning. Trout populations are strong and the streams are fished very lightly this time of the year. One new area that local trout anglers can check out is Turtle Creek in Barron County. The DNR just completed a large stream habitat restoration project located downstream of Barron County D in the Barron County Forest. The stream restoration project consists of a series of plunge pools, deflectors and boulder clusters. In addition, a new angler walking trail and parking area was created at the County Highway D crossing for anglers that prefer more accessible fishing opportunities.- Heath Benike, fisheries biologist, Barron

Namekagon River and tributaries: Summer 2010 saw highest water temperatures ever recorded at the U.S. Geological Survey station on Leonard's Spur at Cable. Eleven days with daily maxima exceeding 80 degrees Fahrenheit! Luckily flows were up due to the summer rain events. It is becoming evident that the Namekagon may hold a valuable race of brown trout adapted to higher temperature. Our surveys could detect no evidence of thermal stress. We sampled healthy, feeding adult brown trout during daylight hours, in midstream -- even when temperatures exceeded published "lethal" values. Namekagon trout densities are still holding in the 1,000 to 2,000 fish per mile range with greater than 25 percent of the adults exceeding 15 inches. That translates to good fishing this fall. Brook trout are increasing in the Cable reach below Cap Creek, where they now dominate brown trout. Baby trout are waiting in the wings, too. The extraordinary 2008-2009 brown trout year class has been followed by an even bigger one in 2009-2010. In lower Mosquito Brook, we estimated about 15,000 young-of-year per mile, about 15 times the long-term average. When those fish smolt to the Phipps reach of the Namekagon at ages 2-3, watch out! These small trout probably result from favorable mild winter conditions. At least for a while, a backside benefit of climate change may be better trout reproduction and recruitment. - Frank Pratt, fisheries biologist, Hayward

We always see a pulse of fishing activity in September. People want to get out one or two times before the season ends. Water levels have been higher than in the recent past. We've kind of broken out of the eight-year drought a little bit with adequate rains this summer. Streams have good flow, the weather is cooling off, the fall colors are right around the corner, and the trout populations are very good based on 2010 preliminary survey evidence. - Dave Seibel, fisheries biologist, Angtio

I know folks around here have enjoyed some nice fish on spinners in Dane County streams. Water levels are returning to normal levels and clarity is good...I have been on Black Earth, Elvers, West Branch and Garfoot in the past week and all were looking good. Some late grasshoppers are around so that may be an opportunity. My brother-in-law has been in Western Wisconsin (Vernon County) and reports stellar days of 30-plus fish with a dozen each day greater than 16 inches. They are there, they are hungry and the access and stream conditions lend them selves to a late season quality experience. - Kurt Welke, fisheries biologist, Fitchburg

All of our streams continue to be significantly above historical base flow levels so we've got small streams that used to be too small for trout but are bigger now and will have trout. The quality of the water in what has historically been trout streams has improved because base flow has increased, and that's carried on downstream in the bigger waters. So we've got more trout in all three types of water and it all has to do with significant increase in base flow. We've had good reproduction because of the increase in water quality so our trout numbers are good. That goes along with the feral trout we've been stocking. Those feral trout survive better and reproduce a lot better than the domestic trout and they are producing multiple year classes. The fish are on average larger and heavier than they have been and that goes back to improvement in water quality which has improved the food base and the living conditions. Northern Grant County, Richland, Crawford and Vernon counties -- that's as good as it gets anywhere in the Midwest. - Gene Van Dyck, fisheries biologist, Dodgeville

Heavy August rains and major flooding scoured out the Rush and Kinnickinnic rivers deepening many of the holes. In addition many trees were washed off the banks and are deposited in new areas. Adult trout numbers should be pretty good even after the flooding. Anglers will find water levels back to normal, however recent rains will add some color to the water making trout easier to catch. Fall is a great time to get out and enjoy the cooler weather and beautiful scenery. - Bob Hujik, fisheries supervisor, Eau Claire