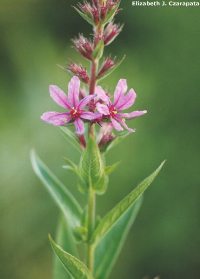 MADISON - This summer's early warm and wet weather is accelerating the germination, growth, and flowering of purple loosestrife, increasing the need for property owners and others to take steps now to prevent these young invaders from spreading to new wetlands.

"We need people to control loosestrife plants on their property and report it everywhere else," says Brock Woods, who coordinates purple loosestrife control for the Department of Natural Resources and University of Wisconsin-Extension.

"With the wet, warm summer we're getting more purple loosestrife germination than in past years and in places where we haven't seen it before. Additional flooding will continue to move this stuff around, causing real problems into the future if we can't get rid of these first-year plants."

These new plants can grow to 5 feet, flower, and drop thousands of new seeds in their first year. The seeds, which are very small, disperse easily to new sites, carried by floodwaters, runoff, wind and birds, as well as on hikers' boots and clothes. They also remain viable in the soil for years.

"The clock is ticking...purple loosestrife started blooming up to three weeks early across the state. It's easiest to identify them when they're flowering, and you want to remove plants before they go to seed."

People can pull young plants to control them or cut larger plants and treat the stumps with herbicide; both methods should be done before seeds drop, she says. When pulling younger plants, be sure to get the entire root and avoid excessively disturbing the soil.

Carefully dispose of purple loosestrife plants that have been pulled or cut in the garbage, first placing them in a bag to prevent the seeds from spreading. A new state law allows landfilling purple loosestrife and other restricted and prohibited plants, Kearns says.

Purple loosestrife has been a serious exotic invader of state wetlands for decades and can grow taller than almost all other herbaceous plants, spread prolifically, and quickly dominate large areas. It can displace native wetland plants, degrade wildlife habitat, displace rare plants and animals and choke waterways.

Biological control methods using special beetles that target purple loosestrife have been successful in more recent years in reducing many existing purple loosestrife plants, but new plants this year could have sidestepped biocontrol in May and June by germinating later, Woods says. Flooding in June and July may also have decimated some control beetle populations, reducing their effectiveness on all loosestrife, both now and in the future.

Be on the lookout, report other invasive wetland plants as well

The warm, wet weather also can provide better germination of other invasive wetland plants as well, Kearns says. Flooding can increase the spread of nonnative phragmites, Japanese knotweed and many other invasives. Water can quickly carry phragmites seeds to new sites and give them more moist places to germinate, especially away from roadside ditches where the first local plants often appear.

Of particular concern are patches of Japanese knotweed growing along rivers and streams where flooding can quickly spread plants or fragments downstream to form new, nearly impenetrable patches that can line stream banks for hundreds of yards.

"Now's the time to be looking out for other invasive plants that are just starting to spread or are not yet known in the state," she says. "Many are starting to flower, making them easier to identify. And it's very important that these species be reported and contained right away to prevent new weedy species from moving across the state."

[Editor's note: Many of DNR's biologists are in the field or setting up for State Fair. If you do not reach them right away, please leave a message with your name, number, and deadline. They will be checking their voice mail frequently and return your calls.]