"Wisconsin's bear population is considerably higher than it was 20 years ago," said Linda Olver, acting DNR bear biologist. "Bear distribution in Wisconsin has shifted further south and southwest, facilitated by the increase in the bear population and areas of suitable habitat available in southern Wisconsin"

Black bears are not evenly distributed throughout Wisconsin. Bears are abundant in the northern third of Wisconsin and in the forested areas of Clark and Jackson Counties. Bears are less common in the southern half of Wisconsin. The following map shows the relative distribution of black bears in Wisconsin. 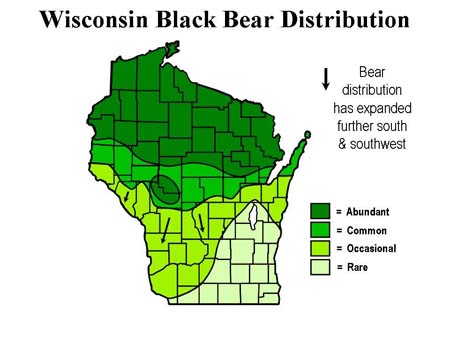 Increasingly, sightings are being reported in the occasional and rare zones. Sightings are compiled from informal reports from emails, telephone calls and news media.

"Since March of this year (2010) we've logged more than 140 sighting reports in areas where bears were seen occasionally or rarely," says Olver, "however some of these reports are multiple sightings of the same bear as it moves through an area." 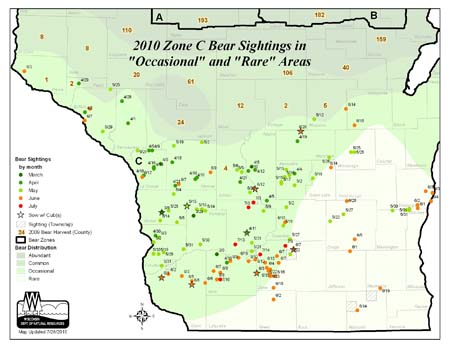 Click on image for larger version in portable document format

Wisconsin is not alone when it comes to bears expanding their range say wildlife managers. A 2008 survey of eastern states and Canadian provinces that actively manage black bear populations indicated that 75 percent of these jurisdictions report an increase in bear range. Only Vermont reported a contracting bear range.

DNR manages bear population size through regulated hunting. Recently, biologists have increased the number of bear harvest permits in response to the apparent increase in bear numbers. Ninety-one percent more harvest permits are available for the 2010 bear season than were allotted for the 2008 bear season.

"The increase in available harvest permits is based on the lower end of the updated population estimate," explains Olver. "Until we have additional population survey information to analyze we will be very careful to avoid any overharvest and resulting setbacks to a healthy bear population."

Bears are an attraction and novelty to some and at the same time a nuisance to others. DNR plans to offer the public opportunities to comment on what is a desirable number of bears in each of the state's bear management regions in the coming year. Public comments will be factored into a new bear management plan. DNR is also developing an online reporting form where the public can report bear sightings. The new feature will be launched in spring of 2011 when bears are once again actively dispersing, searching for new territories.

Bears can quickly learn to associate humans with food and can become a nuisance. It is illegal to feed bears in Wisconsin. Do not feed bears, either intentionally or unintentionally. People unintentionally feed bears by allowing a food source to be accessible to bears near their home. Some examples include: placing bird feeders within reach of a bear during the spring and summer; not securing their garbage cans so bears can access the contents, and leaving dog food out overnight.

DNR contracts with U.S. Department of Agriculture -Wildlife Services to handle nuisance bear complaints. It is important to note that preventing problems from developing is the most effective solution. Moving or "trans-locating" a bear is not.

"If the bear already has an established territory, we are moving the bear into unfamiliar country and likely into another bear's territory," Olver said. "This often leads to tension. If the bear becomes acclimated to people before it is moved, it will likely get into trouble at a new location. In addition to being not always in the best interest of the bear, it costs a lot of money and time to trap, move, and release a bear. Humans have a responsibility not to create a nuisance bear by allowing it access to human-related food sources."

Here are some suggestions for living in areas with black bears:

People who require assistance with a nuisance bear should contact the Wildlife Services 24-hour hotline at 1-800-433-0663 for southern Wisconsin and 1-800-228-1368 for northern Wisconsin.

If a bear is near your home, wave your arms and make noise to scare the bear away. Then back away slowly or go inside and wait for the bear to leave. If the bear found food such as bird feed or garbage one or more times, it will return. When food is no longer available, the visits will stop.

If you encounter a bear while in the woods - stay calm, don't shoot the bear or approach it. Give it space, walk away and watch from a distance.

More information on Wisconsin's black bears and a link to the bear sightings map can be found at the DNR website.