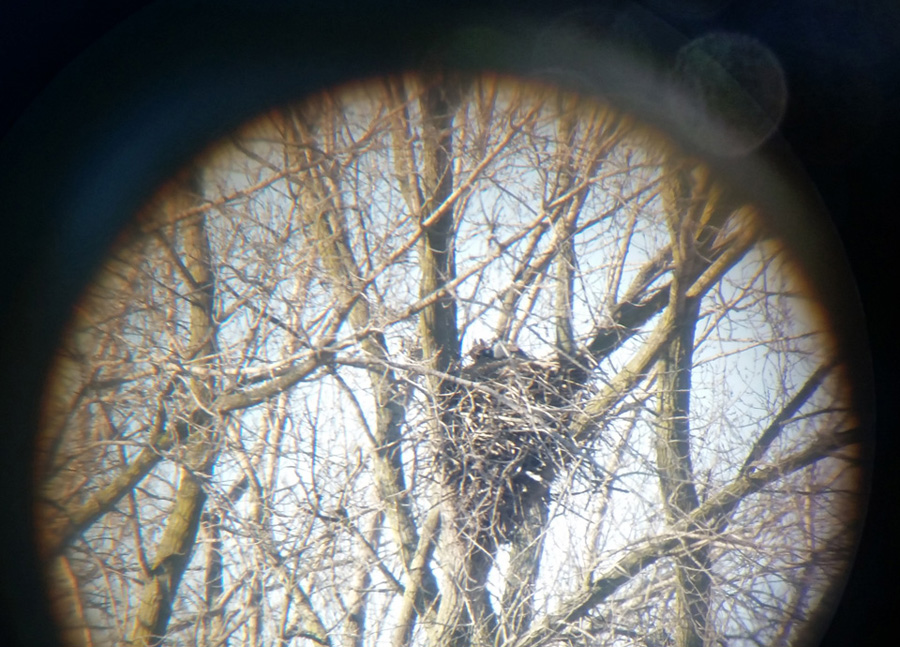 
MADISON, Wis. - With bald eagles soon nesting across Wisconsin, state conservation biologists are hoping citizens can once again provide "eagle eyes" for new nests not known to the Wisconsin Department of Natural Resources.

Anyone who observes eagles engaged in nest building activities or who wishes to report a possible eagle nest may report it by contacting the bald eagle survey coordinator, Laura Jaskiewicz, via email at Laura.Jaskiewicz@wisconsin.gov.

Eagles in Wisconsin - especially in the southern third of the state - typically begin nest building in January and may lay eggs as early as mid-February. Male and female eagles build the nest together as part of their pair bonding.

Eagles mate for life, choosing the tops of large trees to build nests, which they typically reuse and enlarge by adding new material to the nests each year. Nests start at 5-6 feet and may reach 10 feet across and weigh a ton or more. An eagle pair also may have one or more alternate nests within their breeding territory. Both eagles will bring sticks to add to the nest structure and arrange them within the nest, according to U.S. Fish & Wildlife Service.

In 2019, the highest number of citizen scientists and landowners helped the DNR track bald eagle trends across the year, through nesting surveys as well as winter roost counts. Groups such as the Ferry Bluff Eagle Council have conducted winter roost counts for three decades along the Wisconsin River, while the 1000 Islands Environmental Center started counts in recent years along the Fox River in northeastern Wisconsin.

"There is definitely more public awareness of our eagle survey efforts, which no doubt is tied to an overall increased use of social media," said Sharon Fandel, a DNR district ecologist with DNR's Natural Heritage Conservation program, who is responsible for surveying southeastern Wisconsin.

In recent years, citizen reports that Fandel confirmed as the first known eagle nests in Kenosha and Walworth County have spurred additional reports in other counties, resulting in more nests being added to the map.

Volunteers for the Wisconsin Breeding Bird Atlas, a 5-year, comprehensive survey of breeding birds in Wisconsin, also yielded additional nests that were unknown to DNR but were reported via the eBird reporting platform.

Furthermore, for the third year, volunteers with the Madison Audubon Society's Bald Eagle Nest Watch program monitored eagle nests weekly in Dane County, which has seen its numbers go from zero nests in 2005 to 13 this year. The group expanded to several surrounding counties this year, thanks to the number of active and interested volunteers.

"This volunteer project is providing valuable information on nest productivity in a highly urbanized landscape," said Rich Staffen, the DNR conservation biologist who works with the group. "In 2019, we had challenges with making the low altitude flights in and around Madison. Fortunately, the volunteers were already monitoring the nests from the ground, so their information allowed us to provide a complete picture of eagle populations in the area."