Increases Across Majority of State 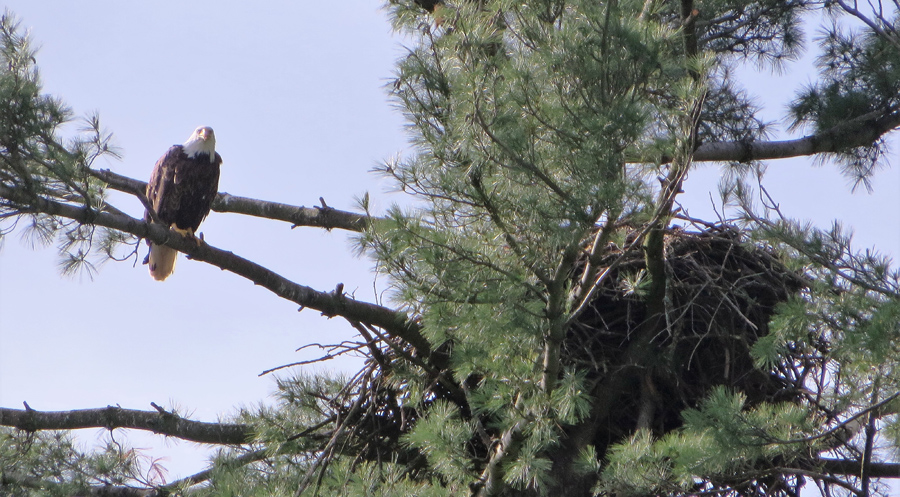 
MADISON, Wis. - Bald eagle numbers soared 27 percent in southeastern Wisconsin in 2019, and populations grew in nearly all parts of the state, as citizen reports helped steer DNR planes, pilots and conservation biologists to more nests to check and volunteer monitors added to the tally.

"Bald eagles' remarkable comeback continues as they expand into unoccupied territories," said Laura Jaskiewicz, the DNR research scientist coordinating the aerial surveys. "We're also excited that many of the new nests were reported from the ground by landowners, raptor enthusiasts and volunteers, adding to the information we're able to collect from the air."

DNR has conducted aerial surveys of known nest locations since the 1970s, documenting population trends and providing current information to landowners and forest managers on nest locations so they can avoid disturbing the birds during the breeding season.

Ground reports and DNR aerial surveys found [PDF] 1,684 occupied eagle nests in 71 of 72 counties in 2019, with all but northwestern and west central Wisconsin experiencing increases. Overall, researchers documented 11 fewer active nests than the record 1,695 in 2018. An occupied nest is a nest with an incubating adult, eggs, young or a repaired nest.

"Northwestern Wisconsin, which had the second-highest number of eagle nests in the state (360), is nearing carrying capacity, which could explain the slight decrease in this area," Jaskiewicz said. Surveyors for west central Wisconsin believe the late harsh winter may have impacted eagle numbers in that area.

As in past years, Vilas and Oneida counties had the most nests at 175 and 150, respectively. These two counties represent most of the Northern Highland Ecological Landscape, which has one of the highest concentrations of freshwater lakes in the world. Bald eagles build their nests near water for ready access to fish, one of their main prey items.

Bald eagles were endangered in Wisconsin and nationally in the 1970s when there were only 108 nests known in Wisconsin. Protections under federal and state endangered species laws, declining levels of the pesticide DDT in the environment coupled with the DNR and partner efforts to help monitor and aid recovery helped bald eagles fly off the state endangered species list in 1997 and the federal list in 2007. Eagles and their nests are still federally protected under the Bald and Golden Eagle Protection Act and the Migratory Bird Treaty Act.

Find more information about bald eagles in Wisconsin and opportunities to see them this winter in the wild, including at events also featuring live raptor shows, on DNR's Bald Eagle Watching webpage.