MADISON, Wis. - Eastern massasauga rattlesnakes are snug in underground burrows for the winter while state natural area crews are busy improving habitat above-ground for the endangered species and analyzing data from population and health checks in 2019.

One of two rattlesnake species in Wisconsin, massasaugas historically occurred throughout southern and west-central Wisconsin but were aggressively killed by people in the 19th and 20th centuries, spurred by bounties until the 1970s.

Massasaugas are now believed to be limited to several isolated wetlands in Wisconsin; monitoring and habitat work began in earnest in 2019 on public land to help sustain and aid their recovery.

"One of our biggest discoveries in 2019 was finding massasaugas in a habitat that DNR staff and State Natural Area crews had just improved for them," says Rich Staffen, a Wisconsin Department of Natural Resources conservation biologist. "It shows that when you build it, they will come."

Eastern massasaugas are a small, thick-bodied snake with vertical pupils and a triangular-shaped head. They are found in wetlands and some adjacent open uplands during their active season.

While massasaugas have venom, their bites are seldom lethal and there is no record in Wisconsin of humans dying from their bite. Massasaugas were listed as state endangered in 1975 and federally threatened in 2016.

To survey for them, state and federal conservation biologists in 2019 walked in a line over prime massasauga habitat and used snake tongs to capture the reptiles during spring emergence. They weighed and measured the snakes and implanted a microchip that can be detected by a scanner if the snakes are recaptured in subsequent years.

The monitoring will help track population and health trends and assure the U.S. Fish & Wildlife Service that the management the DNR is doing is benefitting the endangered snakes, said Rori Paloski, another DNR conservation biologist involved in the surveying. 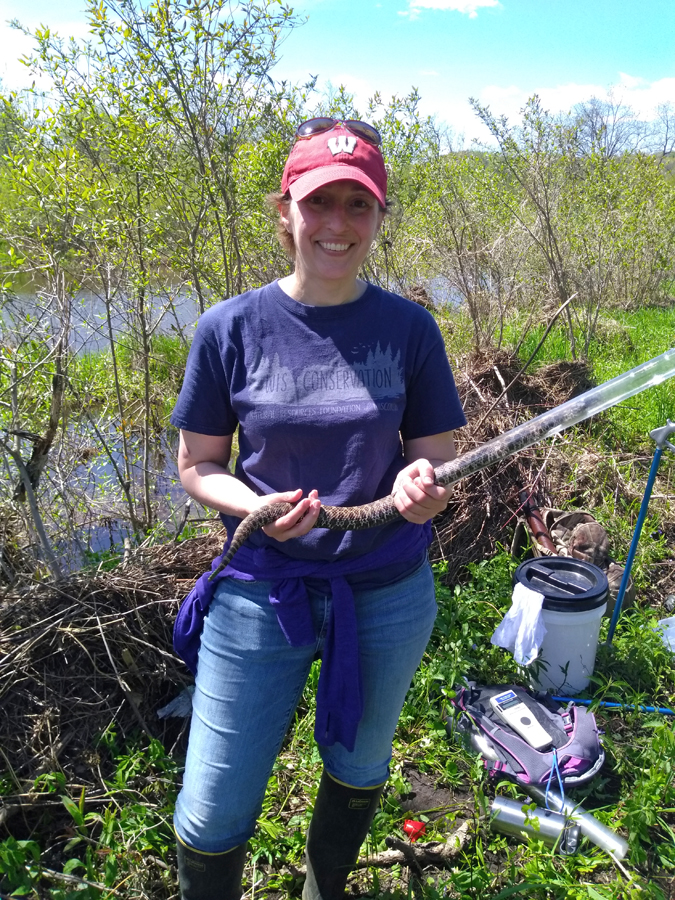 Pilot monitoring in 2018 unearthed a massasauga with snake fungal disease. The newly identified disease has the potential to decimate local snake populations. It can prevent snakes from effectively feeding and drinking, and it makes them more susceptible to predators by extending basking periods, Paloski said. Fortunately, none of the snakes captured, measured and tagged in 2019 were found to have snake fungal disease.

One major challenge for the eastern massasauga is maintaining a suitable open upland habitat. That is where State Natural Area crews come in. "SNA crews are enhancing open upland sites adjacent to wetlands to provide gestating habitat for gravid (pregnant) females," Paloski said.

This fall and winter, when the snakes are inactive, crews will mow and cut trees and brush from known habitat on State Natural Areas. Brush and young trees are bulldozed into piles on-site and around the edges to create a safe cover that the sun filters through for basking rattlesnakes.

Work by the DNR's wildlife management staff to create habitat on wildlife areas for game species, and routine forest management done by the DNR forestry staff can also end up benefitting the endangered snake.

Learn more about eastern massasauga rattlesnakes and how the DNR and partners are helping conserve them in the Wild Wisconsin - Off The Record podcast "Saving Wisconsin's Special Species."