Prohibited plants and animals targeted for fast action upon their discovery

MADISON - Wisconsin invasive species biologists are ramping up rapid response efforts to quickly control invasive plants when they are discovered and asking for the public's help in reporting new infestations of key prohibited species.

"We're ramping up rapid response because for the first time we have federal dollars to do so for terrestrial plants," says Kelly Kearns, invasive plant coordinator for DNR's Natural Heritage Conservation program.

"We have money for early detection and response for plants on our prohibited list, so we want to know about new locations and get control efforts underway."

People can report invasive plants and animals to invasive.species@wisconsin.gov.

SLIDE SHOW | 10 photos
Take a look at some of the invasive species that inhabit our lakes, rivers, wetlands and forests.

Invasive species affecting lakes, rivers and wetlands and forests have had funding available for rapid response for years; with DNR newly obtaining federal money to tackle terrestrial invasive species, the money has been spent this spring to hire a contractor to remove porcelain berry from several Madison and Middleton neighborhoods. A second round of control work will be underway in the fall.

Under the state's invasive species rule, NR 40, prohibited species are those that are not known to be in the state or only in small selected locations so containment is feasible. With some exceptions, it is illegal to sell, transfer and possess prohibited species.

There are dozens of species on the prohibited list; Kearns says that the DNR is especially interested in finding infestations of wild chervil, amur cork tree, and lesser celandine, also known as fig buttercup.

Wild chervil, an herb with fernlike leaves that invades roadsides, open woods, fields and pastures, is now blooming and spreads easily along roadsides and can move into adjacent lands and completely dominate the area. Chippewa and Dunn Counties have large populations, but elsewhere in Wisconsin it is relatively new or not yet present.

"Wild chervil is just starting to bloom and it's only abundant in a few places and we really want to learn where it's popping up," Kearns says. "Report your sightings to invasive.species@Wisconsin.gov, providing a photo, location and contact information."

Amur cork trees have been present in Wisconsin for a while, first as a landscape planting, it has been spreading as birds eat and spread their seeds. This trees species outcompete other plants in forests.

"We're finding a lot more amur cork trees in areas where they had been planted. Partners are surveying areas to see how abundant it is and working with landowners to remove the trees," Kearns says.

Lesser celandine is a groundcover with kidney to heart-shaped leaves and showy, buttercup yellow flowers that invades forests, wetlands and shoreland areas, as well as upland areas and disturbed areas such as lawns. The invasive is poisonous to livestock and humans, and infestations of this plant eliminate spring wildflowers in woodlands. 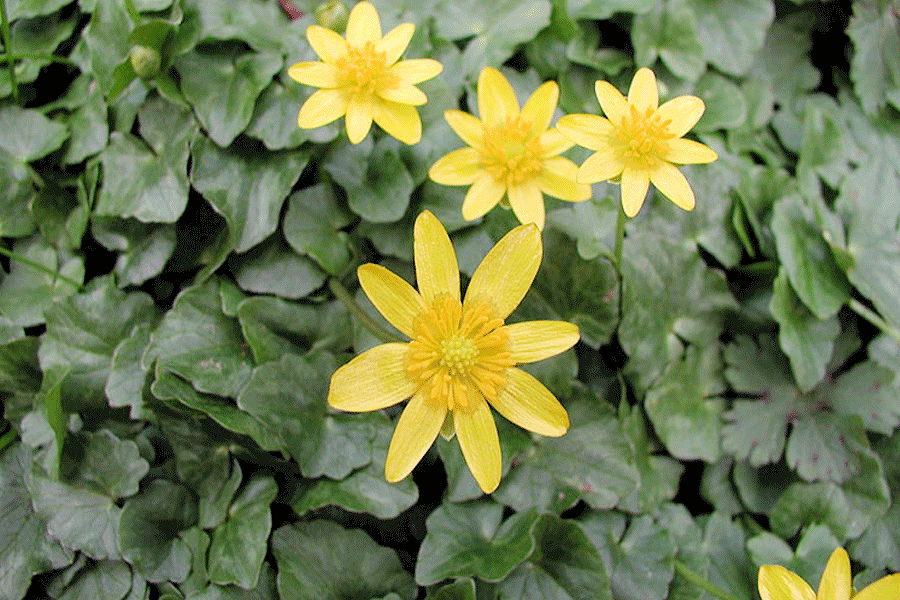 Lesser celandine is poisonous to livestock and humans and inhibits wildflower growth in woodlands.Photo credit: DNR

Porcelain berry (Ampelopsis brevipedunculata) is an ornamental plant from east Asia that spreads aggressively, climbing trees and shrubs, eventually blanketing the forest. The vine has been found on hundreds of properties on the west side of Madison so far.

DNR staff have contacted homeowners in these neighborhoods asking them to look for, report the vine, and try to control it if possible or allow DNR-paid contractors on site to control it. The first round of porcelain berry control was completed in March, with about 8 acres treated over 150 properties in the Madison area. A second wave of treatment gets underway this early fall.

This is the largest known population of this aggressive plant in Wisconsin, and DNR invasive species officials are asking area homeowners to help report and contain the species before it spreads further and blankets yards, parks, and forests.

"We are working with hundreds of landowners in the affected area, including homeowners, businesses, local governments, and the University of Wisconsin, to document and control this plant," says Jason Granberg, an invasive species specialist for DNR's Natural Heritage Conservation program.

"There may be additional areas where it is present but not yet reported, so we're asking landowners to keep an eye out for any invasive vines. Any new reports will guide our control work and bring us closer to eradicating this invasive species."