MADISON - As more snow hits northern Wisconsin and local concerns rise about its impact on the deer herd, County Deer Advisory Councils (CDAC) are wrapping up their portion of the annual antlerless harvest quota-setting process for the 2018 deer season.

While winter 2018 will not go down in history as one of the more severe winters on record, it has stubbornly persisted, reminiscent of 2014 when ice still covered northern lakes for the spring fishing opener in May. Councils take winter data into account, and this has led several to recommend reduced antlerless harvest quotas, compared to original recommendations in March. 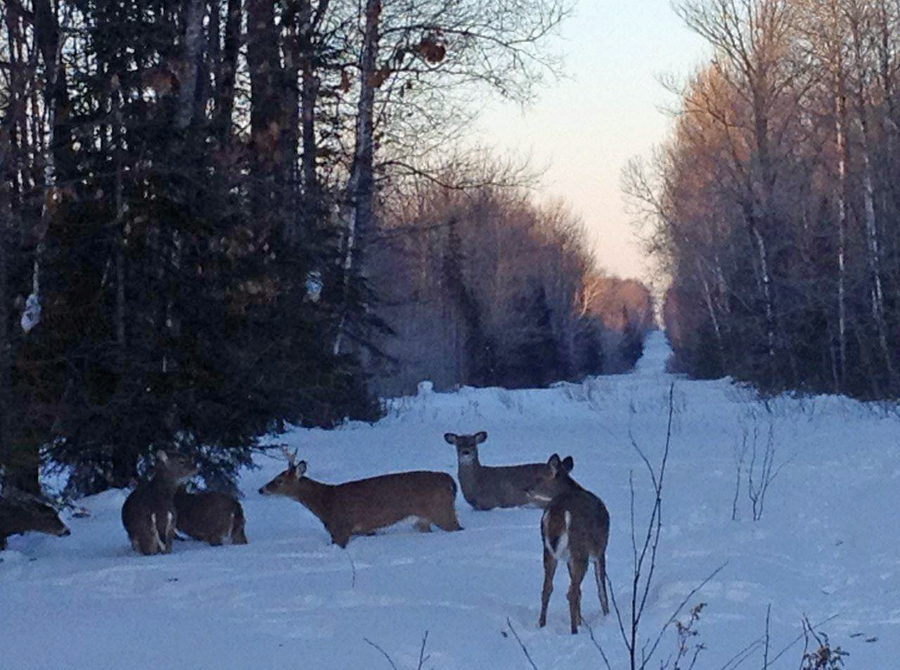 With more than two feet of snow remaining in some areas, wildlife biologists across the north have been in the field investigating reports of noticeably stressed deer.Photo credit: DNR

"We were sailing along nicely in the mild to moderate category, and thought winter was pretty much behind us," said Kevin Wallenfang, deer and elk ecologist for the DNR. "With this recent storm, we are getting more reports of younger deer appearing gaunt and stressed, but adult deer look good in most areas."

With more than two feet of snow remaining in some areas, the anticipated warming weather may not provide relief for another week or two.

Wallenfang said that CDACs went into their March quota setting meetings recognizing what a fourth straight mild winter would do for the deer herd, and set their recommendations accordingly. However, this most recent storm bumped the Winter Severity Index in some areas into the severe category.

"With winter dragging on, several councils, on the recommendation of local department biologists, reduced harvest recommendations in the hardest hit counties during April meetings."

DNR wildlife biologists and volunteers annually monitor the effects of winter weather on the deer herd using several methods, and this information is shared with CDAC members to help inform harvest recommendations and antlerless tag levels.

The Winter Severity Index uses a combination of cold temperatures and deep snows that have previously been shown to negatively affect winter stress levels and ultimately the health of deer. WSI measurements are recorded annually at 42 stations throughout the northern half of the state from Dec. 1 to April 30.

Each day that the temperatures fall below zero degrees Fahrenheit and/or the snow depth is more than 18 inches, conditions are noted for each station. For example, a day with 20 inches of snow and a temperature of -5 would receive two 2 points for the day. Winter conditions are considered mild if the station accumulates less than 50 points, moderate if between 51 and 80 points, severe if between 81-100, and very severe if over 100.

"While current conditions are concerning, winter impacts are cumulative, which is exactly what WSI measures over time - hard winters are not something new to Wisconsin's deer herd," said Wallenfang. "Adult deer can handle it well in most years, and even in the very worst years we typically see only about 10 to 15 percent loss of adults - previous year's fawns can be hit considerably harder and we are certainly seeing some rough-looking fawns in some areas."

Wildlife biologists across the north have been in the field investigating reports of noticeably stressed deer, monitoring habitat conditions, and checking car-killed deer for body fat content.

"Throughout much of the north, internal examinations are showing decent fat content on their backs and around major organs of adult deer," said Wallenfang. "Most does that have been examined are carrying at least one fawn, and bone marrow fat content is fair to good on the majority of deer. As you head south into farmland areas, fat content and pregnancy levels are very good. This winter should have little to no impact on farmland fawn production."

Wallenfang urged people to check the rules and recommendations related to winter deer feeding which is illegal in some counties. The department provides helpful information link "helpful information" to Considerations for Feeding Deer brochure to ensure that people who choose to feed wildlife do it properly, so as not to kill the very animals they are attempting to help.

It is important to note that straight corn is an unhealthy food source for deer if they have not consumed it previously. For landowners, cutting trees to provide natural browse is the best option.

Final recommendations for the 2018 deer hunting seasons will be presented to the Natural Resources Board in Madison at their May meeting.