Walleye, musky, bass and trout - what will you catch when you head out?

MADISON -- Fisheries biologists from the Wisconsin Department of Natural Resources say anglers can expect to find some trophy potential fish as well as abundant numbers of popular game species this spring when the general inland fishing season gets underway statewide on Saturday, May 6.

Editors' Note: The following fisheries team members are available to talk about statewide and regional fishing opportunities for the general inland season opener starting May 6.

"Thanks to great partnerships with angling groups and lake associations, Wisconsin's sportfish populations are in excellent shape heading into opening weekend," said Justine Hasz, DNR fisheries bureau director. "We are seeing continued increases in overall musky size, abundant bass populations on many lakes, strong results from walleye stocking efforts and expanded inland trout fishing opportunities. While many anglers will use the inland season opener as an opportunity to head out for an extended weekend trip, the success of our urban stocking program also means there will be catchable trout close to home for families and young anglers." 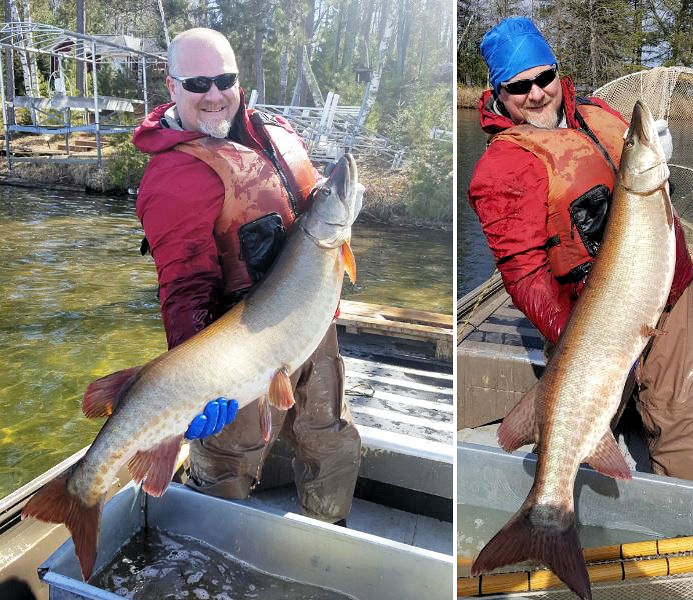 It was a good day in April for DNR fisheries biologist Scott Toshner and his crew while conducting spring netting surveys on Upper Eau Claire Lake in Bayfield County. Left is a 49 inch musky while right is 48 inch musky.
Photo Credit: DNR

Wisconsin's unique combination of easy access, opportunities for consistent action and the potential for trophy fish make it one of the top fishing destinations in the nation, Hasz said.

"Each year, more than 1.3 million anglers buy fishing licenses in the state and their participation generates about $2.3 billion in economic benefits while supporting 22,000 jobs," said Hasz. "Sportfishing brings more than 330,000 nonresident anglers to our state - ranking behind only Florida and Michigan. While our diverse fishing opportunities certainly contribute to these impressive rankings, it's also no secret that Wisconsin produces more record musky than any other state."

In southern Wisconsin waters, the inland musky season gets underway this weekend as part of the general season opener while on northern waters, the musky season opens May 27 to give the fish additional time to complete spawning. Steve Hewett, DNR fisheries management section chief, said the average length of all muskies captured during spring netting surveys as well as the size of the largest 10 percent of fish has been trending upward in recent years. 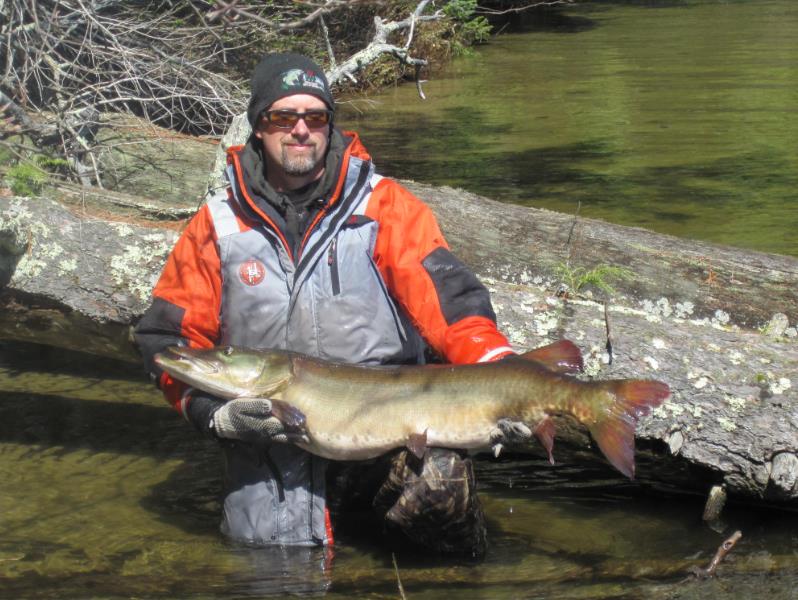 DNR fisheries supervisor John Kubisiak cradles a 47.7 inch musky netted in April on Two Sisters Lake in Oneida County during spring netting surveys. While the southern zone musky season south of Highway 10 gets underway on Saturday, May 6, the northern zone musky fishing season begins May 27 to give the big fish a chance to finish spawning.
Photo Credit: DNR

"The average length of all adult muskies in state waters now stands between 37 and 38 inches with the top 10 percent of fish collected during spring netting surveys running above 46 inches in length," Hewett said. "We attribute these positive trends to a combination of sound propagation work, continued habitat improvements and incredible angler commitment to informed catch and release practices."

Among the impressive fish captured this spring was a 47-plus-inch musky weighing more than 32 pounds that was netted in April on Two Sisters Lake in Oneida County while Upper Eau Claire Lake in Bayfield County yielded 48- and 49-inch fish. After getting weighed and measured and given a fin clip for population studies, all the muskies were quickly released.

In all areas of the state, the daily bag limit for musky is one fish and it must be at least 40 inches. Most musky anglers practice catch and release even if the fish are of legal size.

Hasz said DNR fisheries biologists also are conducting walleye research on a number of inland and boundary waters to understand local population dynamics. Through the Wisconsin Walleye Initiative, more than 797,000 6- to 8-inch walleye fingerlings were stocked in 150 Wisconsin waters in 2016 - a record number of fish.

"This year, anglers can look forward to catching some of the 455,307 large fingerlings stocked in 2013 as many of these fish are now reaching legal size," Hasz said. "Most inland lakes and rivers in the northern third of Wisconsin known as the Ceded Territory have a daily bag limit of three walleye with a length limit of 15 to 20 inches with one fish greater than 24 inches. We are excited to see how anglers do this year and in the years ahead as more of the Wisconsin Walleye Initiative stocked fish reach legal size." 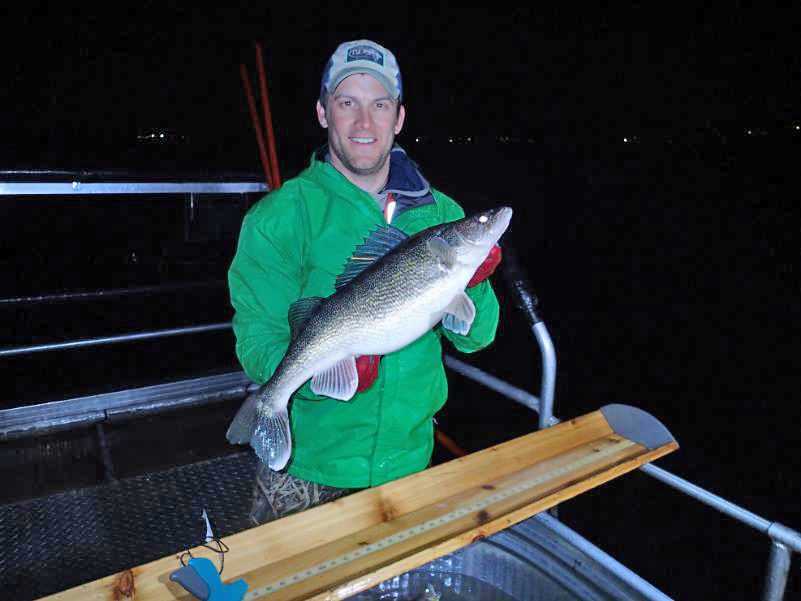 DNR fisheries biologist Dan Oele picked up this tagged walleye during survey work on Lake Waubesa. DNR has been tagging walleye in the Madison lakes and elsewhere to better understand the movement of fish between the lakes as well as harvest. Anglers who catch a tagged fish anywhere in the state should report it to the local DNR fisheries biologist.
Photo Credit: DNR

Wisconsin bass management efforts also continue to move ahead with a daily bag limit of five largemouth bass 14 inches in length or greater on most waters. Smallmouth bass management is divided into northern and southern zones with catch and release only in the northern zone until June 17. Northern zone regulations for smallmouth bass then become consistent with southern zones with a five fish daily bag limit and 14 inch minimum size.

Meanwhile, trout anglers continue to benefit from habitat management efforts that have contributed to a significant expansion of Wisconsin's documented trout waters. More than 41 additional streams have been classified as trout waters since 2014 with most of these new 292 trout-stream miles located in west central and southern Wisconsin. Overall, Wisconsin boasts more than 13,000 miles of trout streams.

Additional information about where to trout fish and local regulations can be found using DNR's TROUT tool, which was designed to help trout anglers find places to fish including classified trout waters, public land and DNR fishing easements. To learn more about the regulations, search the DNR website, dnr.wi.gov, for "trout regulations."

Anglers fishing Lake Michigan and all other Wisconsin boundary waters are again reminded they must possess a paper copy of their license to be legal. The paper printouts are required so law enforcement officials in the surrounding states can verify compliance with license and stamp regulations.

More information about length and bag limits as well as places to fish can be found on the DNR website, dnr.wi.gov by searching "Fishing Regulations."

Be firewise while fishing

DNR encourages anglers heading out for opening weekend to be firewise when planning campfires for shore lunches or burning debris around seasonal residences. Regardless of recent precipitation, wildfire season extends until vegetation greens.

To obtain a free DNR burning permit or to keep an eye on the changing fire danger and any burn restrictions, visit the DNR website and search keyword "fire" or call 1-888-WIS-BURN (947-2876).