MADISON -- Kenosha County has its first documented active bald eagle nest in 45 years of surveying, bringing to 70 the number of Wisconsin counties where the nation's symbol has made a comeback.

The discovery leaves Milwaukee and Walworth counties as the only remaining counties with no confirmed active bald eagle nests, but conservation biologists believe it is only a matter of time before the nation's symbol sets up housekeeping there too.

"It's great to see the continued expansion of their range and the numbers of nests continuing to rise," says Department of Natural Resources conservation biologist Sharon Fandel, who last week confirmed the bald eagle nest after receiving a call from a landowner.

She drove to Kenosha County March 28 and used a spotting scope to identify a bald eagle incubating on a nest in a large tree along the edge of an agricultural field. 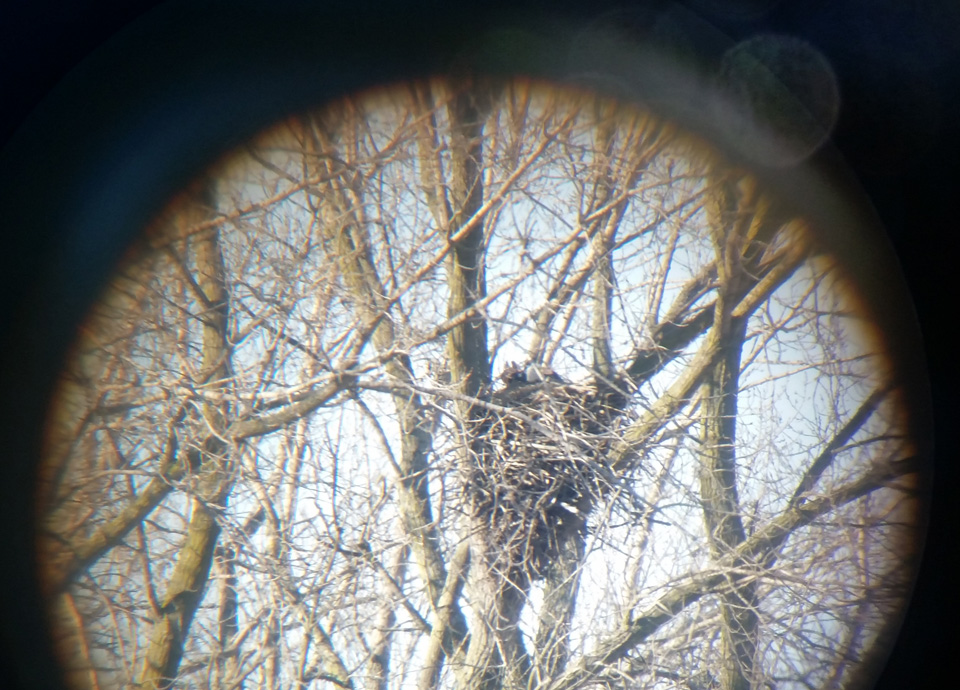 A view through a spotting scope of the first documented bald eagle nest in Kenosha County.
Photo Credit: DNR

"I congratulated the landowner on getting the first documented eagle nest in Kenosha County," Fandel says.

"I thought it was pretty cool," the landowner said. "It's kind of inspiring and surprising to have it on my land."

Fandel is excited as well about the confirmation of an active eagle nest. "It tells of a great success story in terms of how we were able to react to issues that were negatively impacting bald eagle populations and turn it around by changing our behavior to benefit them in the long run."

Bald eagle populations have gradually recovered in Wisconsin and nationally as a result of the banning of the pesticide DDT nationally in 1972 (and in Wisconsin in 1969), a prohibition on killing of eagles, improved water quality in lakes and rivers, nest protection, and reintroduction of eagles in some areas. Bald eagles were removed from Wisconsin's endangered species list in 1997 and from the federal list in 2007.

Wisconsin aerial surveys in 2016 confirmed 1,504 occupied eagle nests, nearly 15 times as many as the 108 documented nests found in the 1970s. Aerial surveys to determine if nests are occupied are underway now for 2017 and results will be compiled later this spring. 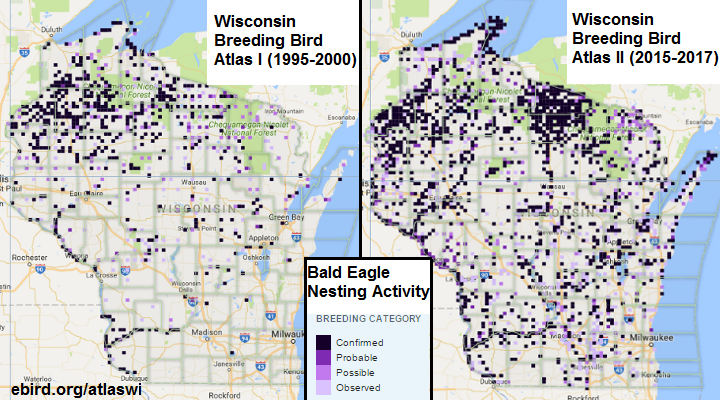 People who see an active bald eagle nest, with adults incubating eggs or exhibiting other breeding behaviors, are encouraged to report their 2017 observations through the Wisconsin Breeding Bird Atlas. Reporting helps inform the comprehensive, 5-year breeding bird survey as well as the aerial surveys to monitor eagle nests.

Wisconsin residents can celebrate and contribute to the continuing comeback of bald eagles and rare species by buying a bald eagle license plate. License plate sales and donations to the Endangered Resources Fund are a critical source of funding for work by DNR's Natural Heritage Conservation staff with endangered species and natural areas.

The $25 annual donation to keep the plate helps fund work including the bald eagle nest occupancy survey, which is one of the longest running surveys of its kind in North America and provides important information to help monitor eagle populations and protect nests. Learn more about the work funded by the Endangered Resources fund by reading the annual report of DNR's Natural Heritage Conservation Program [PDF].