MADISON - Bald eagle watching events take flight in January in several Wisconsin communities and continue into March, allowing people ample opportunities to watch eagles at their wintering sites and enjoy live raptor shows and other activities showcasing the raptor's recovery from near extinction. 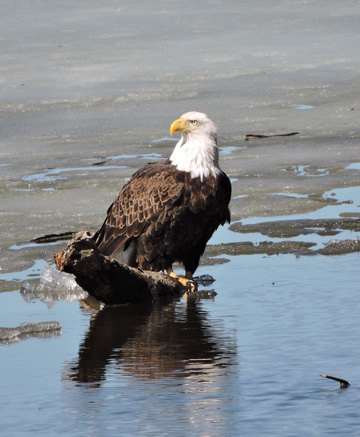 A bald eagle on the ice at Ferryville, which hosts its Eagle Watching Day March 4, 2017.
Photo Credit: Patty Sampson

Bald eagles from northern Wisconsin, Canada, northern Michigan and Minnesota move south as the lakes and rivers they live along freeze over during cold winters. Seeking fish, a main food source, the raptors typically congregate along open water areas below dams along the Wisconsin, Mississippi and Fox rivers, where their growing presence has turned the sites into birdwatching destinations and fostered community events.

"Eagle watching events celebrate the successful return of bald eagles to Wisconsin and provide a great variety of activities and settings to see and learn more about this majestic bird," says Sumner Matteson, a Department of Natural Resources avian ecologist who has been involved in the Bald Eagle Watching Days since its inception.

The first event on the calendar, Bald Eagle Watching Days, set for January 13 and 14 in the Sauk Prairie area in Sauk County, is also the longest-running event in Wisconsin. Bald Eagle Watching Days marks its 30th anniversary in 2017 with highlights including eagle viewing at overlooks or on buses with eagle experts on hand to answer questions and live shows with bald eagles and other raptors from the Schlitz Audubon Nature Center in Milwaukee. The planned release of an eagle rehabilitated at the Raptor Education Group, Inc., on January 14 is another highlight. 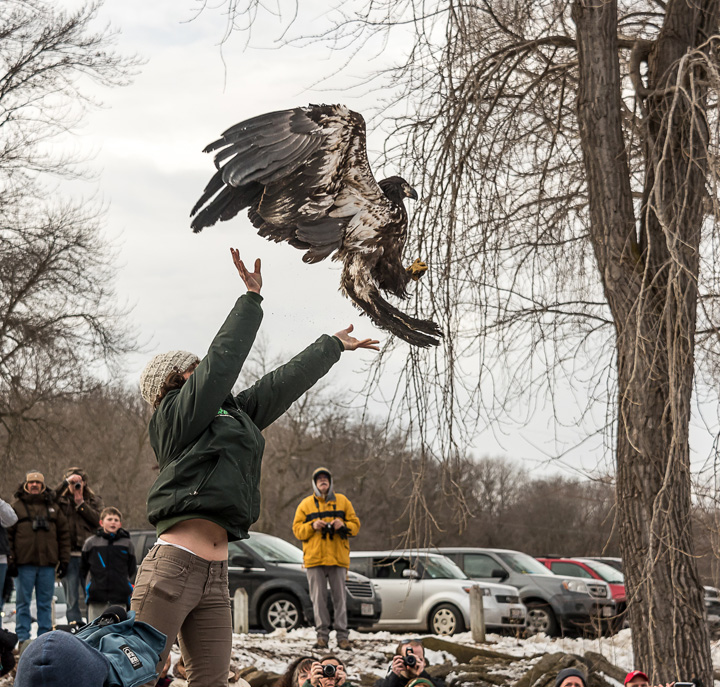 The planned release of a rehabilitated eagle is one of the highlights of Bald Eagle Watching Days Jan. 13-14 in the Sauk Prairie area.
Photo Credit: Kurt Eakle

DNR conservation and wildlife biologists will be helping answer questions and presenting talks at the events. As well, DNR's Natural Heritage Conservation Program (NHC) will have a booth where people can learn more about Wisconsin's eagle population and the bald eagle license plate that is a fundraiser for NHC work with endangered plants and animals and state natural areas. 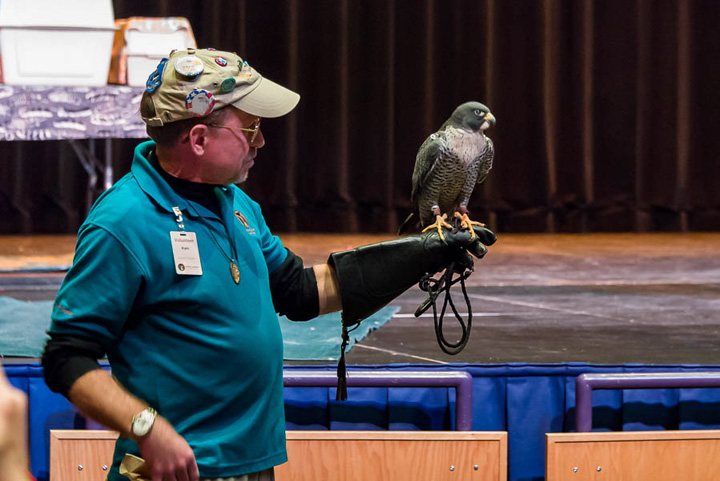 Live birds of prey shows are part of Bald Eagle Watching Days Jan. 14 in the Sauk Prairie and at other events this winter.
Photo Credit: Kurt Eakle

Eagle Days along the Fox River

Eagle Days Along the Fox River brings a series of events to the Fox River Valley in January. The river is a wintering site for hundreds of bald eagles following habitat improvements and the removal of contaminants within the river, says Cheryl Root, eagle monitoring coordinator for the Northeast Wisconsin Alliance, a community based non-profit organization serving the people and wildlife of Northeast Wisconsin.

"The bald eagle is a symbol of the improved health of the river system and its communities," she says. "Important elements affected by this revival include health of its citizens, tourism, job creation and appreciation of our history. These are reasons to celebrate Eagle Days along the Fox."

Events range from a Mid-Winter Eagle Monitoring at sunrise at various locations and presentation at Atlas Waterfront Café on Jan. 14; various raptor education programs and speakers at the Paper Discovery Center in Appleton and the Neenah Public Library and indoor viewing at Lawrence University on Jan. 21-22; and various live eagle and raptor presentations at 1000 Islands Environmental Center in Kaukauna on Jan. 28.

Wings Over Alma, a non-profit nature and art center, offers a 50-foot viewing deck just below Lock & Dam #4 with free scopes and binoculars for an up close viewing opportunity on January 21. The Eagles on Ice event includes a chili feed and is sponsored by Wings Over Alma Nature & Art Center.

Ferryville Eagle Watching Day is set for March 4 at the Ferryville Community Center, 170 Pine Street Highway 35 and will feature eagle nest building at 10 a.m., an activity in which kids can help build a nest and learn more about eagles and preserving habitat; live eagle and raptor programs by the University of Minnesota Raptor Center at 10:30 a.m. and 2 p.m. There also will be kids activities, presentations on the waterfowl of the Upper Mississippi Wildlife Refuge, a hooting contest, and displays of middle schoolers' eagle art and habitat projects. The event is sponsored by the Ferryville Tourism Council and the Friends of Pool 9.

Tips for viewing wherever and whenever you go

With 2016 nest surveys showing the bald eagle population has soared to a new high - 1,504 occupied nests translating into more than 3,000 adult birds plus their offspring - there should be plenty of opportunity to see the birds at the events and on your own, Matteson says.

"Continued cold weather will mean more birds coming down to open water along the Wisconsin, Mississippi and Fox rivers where the events are centered," he says. "Warmer weather may mean the birds are more scattered across the countryside, but some are almost always found at open water areas because those area provide an easy source of food."

The greatest number of eagles can usually be seen at open-water areas in the mornings as they fly back and forth, searching for their first meal of the day. Late afternoon can be good as well as they are moving back to their roosting areas.

Matteson cautions eagle watchers, whether participating in organized events or on their own, to take care not to disturb eagles. Winter is a stressful time of the year for the birds and they need to conserve energy to make it through the long winter. Please stay in your car their car unless they are at a staffed viewing site. 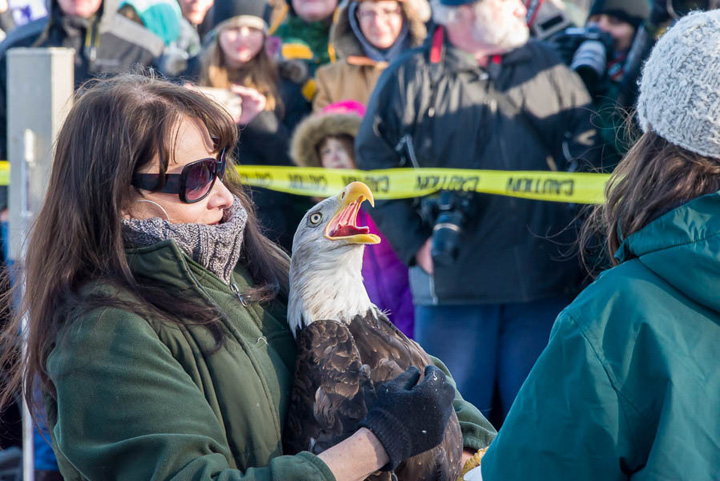 Marge Gibson of the Raptor Education Group, Inc., (REGI) gets ready to release a rehabilitated eagle at the 2016 eagle days event in the Sauk Prairie area.
Photo Credit: Kurt Eakle

Bald eagles have recovered from near extinction in the 1970s in Wisconsin, when there were only 108 breeding pairs, and elsewhere in the nation as a result of the banning of the pesticide DDT nationally in 1972 (and in Wisconsin in 1969), prohibition of killing of eagles, improved water quality in lakes and rivers, and nest protection and reintroduction of eagles in some areas. Bald eagles were removed from Wisconsin's endangered species list in 1997 and the federal list a decade later. The number of eagle pairs in Wisconsin has grown from 108 pairs in the 1970s to ten times that number today.