MADISON -- Wisconsin's volunteer-based, multi-year survey to understand which birds nest here and how that's changed is wrapping up its second season of observations and has documented 220 nesting species, including 11 new to Wisconsin in the past two decades. 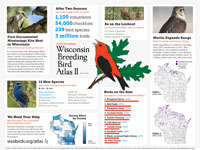 Volunteers also have documented the growing presence of once rare native birds including peregrine falcons, bald eagles and trumpeter swans.

The survey, known as the Wisconsin Breeding Bird Atlas II, is a follow-up to the first atlas survey from 1995-2000 that resulted in a reference book still used today to guide species conservation and land management planning.

"Our volunteer team grew to more than 1,100 people this year and their work is providing important information on shifts in bird populations that we need to know for future conservation efforts," said Nick Anich, DNR conservation biologist and lead survey coordinator.

For the first time ever, Mississippi kites, a raptor common in the southeastern U.S. that is known for its aerial acrobatics, have been found breeding in Wisconsin with confirmation of a pair raising one chick at a nest in Rock County. 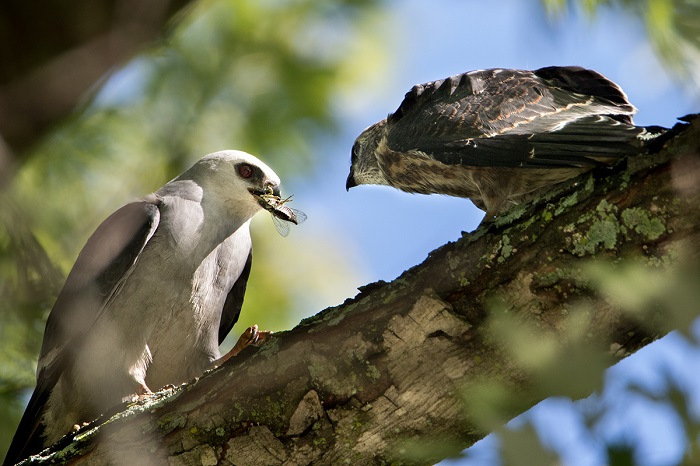 Mississipi kites were found breeding in Wisconsin for the first time in the survey.
Photo Credit: Scott Weberpal

"This discovery represents one of the northernmost breeding records in the Mississippi kite's range and perhaps the most exciting find of the atlas so far," said Ryan Brady, Wisconsin Breeding Bird Atlas science leader and Wisconsin Bird Conservation Initiative bird monitoring coordinator.

Other new species confirmed include canvasback and blue grosbeak.

"Blue grosbeak is a rare breeder in Wisconsin, as we sit at the northern edge of this species' range. Canvasbacks, which mostly breed from the Great Plains northwest into Canada, are regular migrants but very rare nesters in Wisconsin," said Brady. "Mississippi kites, on the other hand, are definitely expanding their range north and west from their stronghold in the southeast U.S."

Volunteers observe birds and enter their sightings online into an eBird database developed for the survey project by the Cornell Lab of Ornithology. The records are reviewed by Anich, Brady, and other ornithologists from organizations leading the project, including the Wisconsin Society for Ornithology, Western Great Lakes Bird and Bat Observatory and Wisconsin Bird Conservation Initiative. 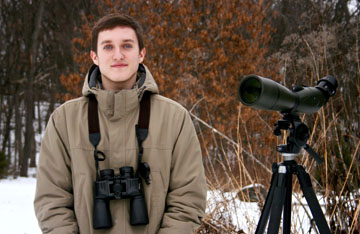 Volunteers like Joshua Cullum [PDF] of Rock County are critical to completing Wisconsin's comprehensive breeding bird survey. People at all skill levels of birding are encouraged to participate. Go to wsobirds.org/atlas to learn how to get stared and for a training session near you.
Photo Credit: DNR

With more than 54,000 checklists submitted to date, the survey has already amassed time and location information for 3,087,260 birds and has listed 239 of them as at least possible Wisconsin breeders, with breeding confirmed in 220 of those species.

"These are very impressive numbers, but there is still a lot of work to do -- we've got great volunteer coverage in more populated areas, but there are large swaths especially in the Driftless Area and across northern and central Wisconsin where we could really use help over the next couple of years," said Anich. "It's easy to participate and you don't have to be an expert birder to help the project."

The survey will continue through 2019, with a concerted effort in the next few years to fill coverage gaps by sending current volunteers into under-covered areas and tapping new volunteers that live there.

"We constantly get feedback from people that let us know how rewarding it is to get outside in nature and pay attention to things you may not usually notice - from skilled birders to folks just watching in their backyard, it's also kind of fun to see your sightings up on the map," said Anich.

While bird breeding activity for many species has slowed for the year, Anich encourages interested people to learn more about the effort now to get ready to join in next spring when the breeding season begins again.

"We encourage people at all skill levels of birding to participate," Anich says. "A good place to start is to visit our project website at wsobirds.org/atlas (exit DNR) and learn how to contribute your own observations." Regular training sessions also take place throughout the state, and a list of events can also be found at that site.