MADISON - Wisconsin's hook and line sturgeon season gets underway September 3, offering a chance to celebrate efforts to restore the majestic and valuable fish to more of its native range.

The sturgeon hook and line season runs until Sept. 30 and has generated strong angler interest in recent years. In 2015, the Wisconsin Department of Natural Resources issued some 29,694 tags to anglers who intend to take to lakes and rivers of the state in pursuit of lake sturgeon, up from about 28,000 in 2014. 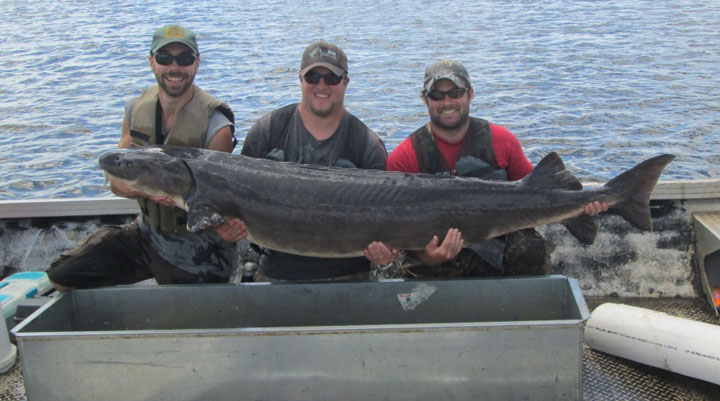 The 2016 sturgeon hook and line season offers plenty of reasons for excitement. Among them: this 83.2" lake sturgeon was handled and safely released during recent survey work on the Turtle Flambeau Flowage.
Photo Credit: DNR

"We are pleased at the continued progress being made by DNR and its many partners to expand available habitat and reintroduce fish to areas where they have a chance at reproduction," said Justine Hasz, DNR fisheries bureau director. "Interest in hook and line sturgeon fishing has been strong in recent years and we know many anglers enjoy the opportunity to participate on a catch and release basis. This year we are offering several areas featuring extended catch and release opportunities."

New catch and release opportunities for this year include:

Ryan Koenigs, DNR fisheries biologist and sturgeon team leader, said the hook and line season also offers anglers the opportunity to harvest the fish of a lifetime. For example, in 2015, anglers harvested six sturgeon from the Flambeau River and one from the Chippewa withthe largest fish being 68 inches and 83 pounds..The 2014 season also produced some very large fish from the area with one measuring 70 inches and weighing in at 70.5 pounds.

"We appreciate angler participation in the hook and line sturgeon season as the money collected from the sale of the sturgeon harvest tags goes right back into funding our stocking and restoration efforts," Koenigs said. "The sturgeon is part of our state's rich natural heritage and sturgeon enthusiasts are now able to enjoy more opportunities to pursue this fish."

The Wild Rose State Fish Hatchery serves most waters in the state and has been producing as many as 40,000 sturgeon each year since the second phase of its renovation was completed in 2010.

A complete list of inland waters with a hook and line sturgeon season can be found in the 2016-2017 Fishing Regulations. In addition to a fishing license for non-exempt anglers, those who intend to harvest a sturgeon must purchase a sturgeon harvest tag before bringing in a fish. (The harvest tags are not required for catch and release.)

Harvest tags cost $20 for residents and $50 for nonresidents and can be purchased by visiting GoWild.wi.gov. Harvest tags can be held by the angler as long as the angler remains with the fish but otherwise must be attached. Harvest tags must be immediately validated after catching a sturgeon of legal length that the angler wishes to keep. A harvested sturgeon must be registered at a designated registration station by 6 p.m. of the day following harvest.

Anglers pursuing the catch and release option are encouraged to use special care in handling the fish. Although it is not illegal to boat a sturgeon and quickly take a photo, the fish may grow to be more than six feet long and live more than 100 years so if it is a large fish, consider leaving it in the water.

Do not tether or tie the sturgeon by the tail to weigh it, as this can cause physical damage to the fish. Also, avoid lifting the fish by the head as this can stress or damage the gill plates. If a smaller sturgeon is caught, simply hold the fish under the belly when handling. After landing the fish and taking any photos or measurements, release it quickly to reduce stress and ensure survival.