[EDITOR'S ADVISORY: This news release has been updated to correct the dates of the celebrations: August 13 and 14.]

Within a four-week period in the summer of 1966, Wisconsin opened three new state parks to the public, joining 29 others that had been established since the first state park, Interstate Park, opened in 1900. 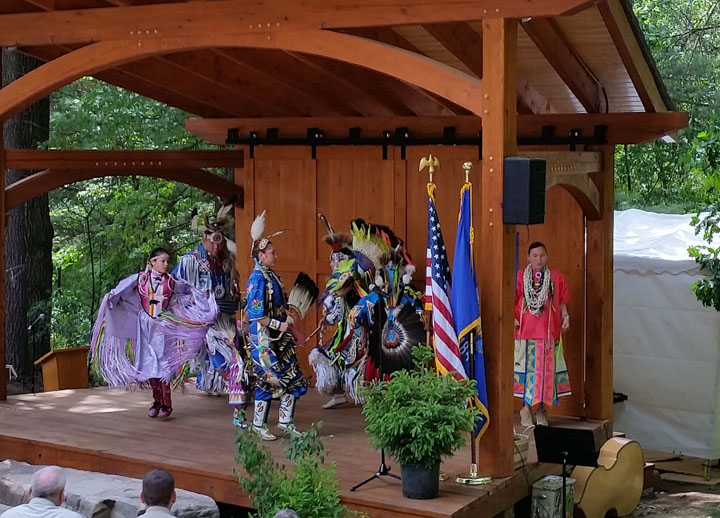 Ho Chunk dancers will perform at the 50th anniversary celebration at Mirror Lake State Park on Saturday, August 13. Here dancers performed at the dedication of the park's new amphitheater, which the Ho Chunk Nation contributed to constructing.
Photo Credit: DNR

In 1961, the Wisconsin Legislature enacted a long-range program of acquisition and improvement of state recreational facilities known as the Outdoor Resources Action Program or ORAP. The program was funded by a one-cent tax per pack of cigarettes that prompted a wave of new park purchases, maintenance projects and the era of rails-to-trails developments.

Three of those first acquisitions were Hartman Creek State Park, Lake Kegonsa State Park and Mirror Lake State Park in 1962. It took several years from acquisition to opening the parks in that summer of 1966.

Hartman Creek, located in Waupaca County celebrated its anniversary June 4. Mirror Lake and Lake Kegonsa will hold their celebrations the weekend, with both parks waiving admission fees for the events.

Mirror Lake State Park events will take place in the new amphitheater that was built with the support of the Friends of Mirror Lake State Park. It will begin with music by the group Swing Crew at 10 a.m. followed by a park re-dedication with a 50th anniversary plaque, a display of a time capsule that will be buried and a history program. Later in the afternoon, there will be performance by Ho Chunk Nation drummers and dancers and an evening concert.

The Lake Kegonsa State Park celebration will kick off with face painting and t-shirt printing from 10 a.m. to noon followed by an anniversary cake cutting. In the afternoon there will be a falconry program, children's' activities and historical displays of the park.