MADISON - Will buffaloes and rare butterflies prove a winning combination again this year? 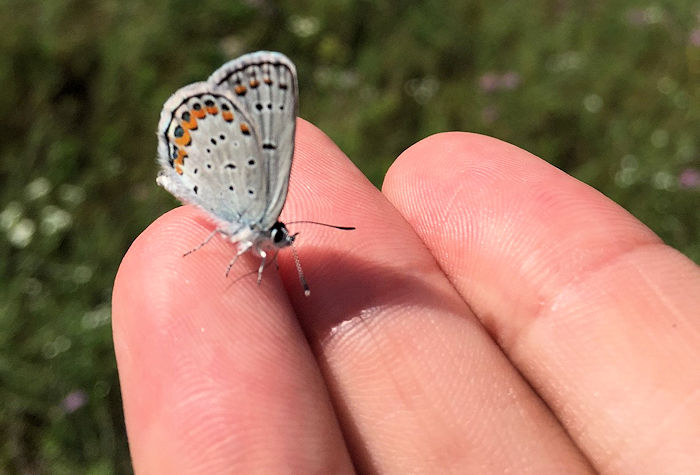 "We are happy with most of the numbers we are seeing so far in our surveys although the weather has been a serious issue," says Chelsea Gunther, the Department of Natural Resources conservation biologist coordinating surveys and Wisconsin's Karner Blue recovery program.

"The Sandhill site is looking promising again and I'm hopeful it is another good year there and at other central Wisconsin sites."

Record numbers of Karner blue butterflies were surveyed last year at Sandhill Wildlife Area, a 9,150-acre State Wildlife Area in central Wisconsin named for a series of gently rolling sandy ridges crisscrossing the property. The 58,000 total counted at the site in 2015 was a fourteenfold increase from the previous tally of 3,800 at that site in 2013 and constituted nearly 80 percent of the statewide total of 74,000 in 2015.

The main goal of the recovery program is to establish 11 independent Karner populations of 3,000 to 6,000 butterflies, on different state-owned properties that include wildlife areas, fishery areas, state natural areas, state parks, and state forests. Population levels must exceed the site specific goals for four consecutive years to be considered recovered.

Extensive efforts by DNR staff and property managers at Sandhill, as well as habitat benefits resulting from having a herd of buffalo at the site, are restoring the kind of open habitat Karner blue butterflies need. Wild lupine, the native plant that is the only one the butterflies eat during their larval stage, is found in the prairies and oak savannas at the site.

Research highlighted in "Bison and butterflies" in the April 2015 Wisconsin Natural Resources magazine, has revealed a link between habitat disturbances caused by American bison and improved habitat for the butterfly.

"They found that the bison are having a real impact by keeping woody shrubs out of the area and causing minor soil disturbance," says Gunther. The bison roll around on the ground, rub horns against the shrubs and trees, setting back growth and disturbing the soil. "It's making really great conditions for the Karner blues and I'm hopeful that these conditions continue to support Karner populations."

This summer, DNR is conducting annual population surveys at Sandhill Wildlife Area and 11 other sites using contractors including University of Wisconsin-Stevens Point faculty and students. As well, Gunther and other DNR conservation biologists are continuing habitat surveys to determine what management tools work and what don't. 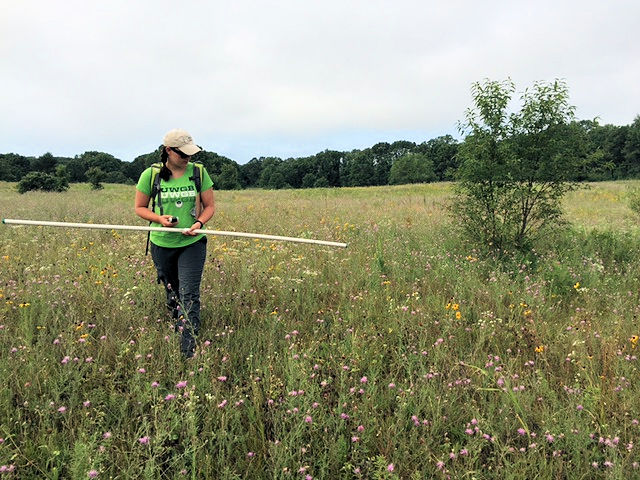 DNR Karner Blue Butterfly Recovery Coordinator Chelsea Gunther surveys for the federally endangered species on state lands by walking along specific routes and counting the butterflies that fly up within 2.25 meters on either side of her. Population and habitat surveys are underway now.
Photo Credit: Kris Gunther

The Karner blue butterfly was listed in 1992 as a federally endangered species; its range includes Indiana, Michigan, Minnesota, New Hampshire, New York and Ohio as well as Wisconsin. Wisconsin has the largest population in the world and its range here runs from Waupaca and Waushara counties west to the Black River Falls area, and then northwest to Grantsburg.

The Karner blue is protected by federal law as an endangered species, but the department and 40 other partners have implemented a statewide Habitat Conservation Plan since 1999 that allows certain activities - such as roadside and utility maintenance and timber harvests in Karner habitat - but makes sure those activities are carried out in ways that conserve and restore the butterfly and its habitat.

DNR's Natural Heritage Conservation program initiated the Karner blue butterfly recovery effort in 2007 that is working to restore Karner habitat and populations at state-owned properties in five areas of Wisconsin.. The goal of the recovery program is to establish 11 independent Karner populations of 3,000 to 6,000 butterflies each, on different state-owned properties that include wildlife areas, fishery areas, state natural areas, state parks, and state forests. There are also a handful of cooperating private landowners involved in the recovery program.

Such protection and restoration efforts have helped several of the Karner blue populations exceed the recovery goals in several years but not four years in a row as required for reclassification and removal from the endangered species list, Gunther says. As well, some designated recovery properties have no Karners or very few, so it will take continued success and expansion of populations to demonstrate recovery across the Wisconsin range.

"We still have a ways to go to get to full recovery but there is obviously something good going on at Sandhill and at some of these other sites," says Gunther, who works for DNR's Natural Heritage Conservation program.. "We're hopeful about what that means for Karner blue butterflies as well as the 50 other rare species that use the same kind of prairies, barrens and oak savannas they do," she says.