MADISON - Visitors to Wisconsin State Parks will have 20 opportunities at 16 separate parks to enjoy "Shakespeare in the Park" performances this summer. The performances begin July 16 and run through August 21. 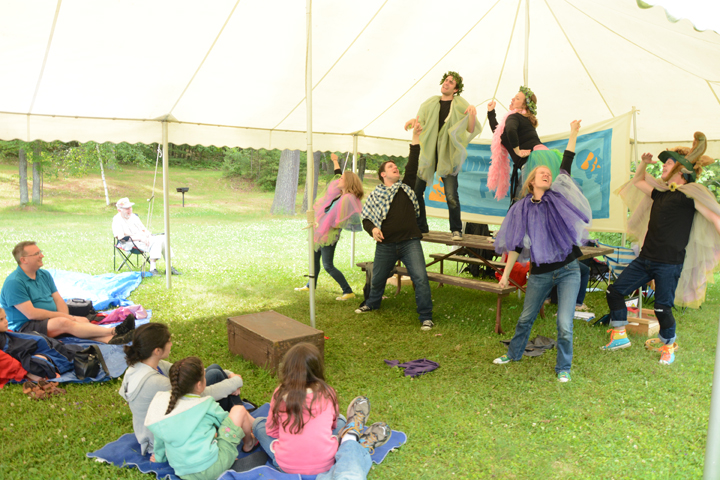 The Summit Players in a performance of "A Midsummer's Night Dream" last summer at the Northern Highland-American Legion State Forest
Photo Credit: DNR

The performances include stripped-down productions of Shakespeare's "A Midsummer Night's Dream" and "As You Like It." The performances are free, although at most locations an annual or daily admission sticker is required for entrance into the property.

The performances are done by The Summit Players, a group of Marquette University theater and drama alumni. The troupe's productions cut Shakespeare plays down to fun and frenized one hour and fifteen minute productions. The production is "Shakespeare out of a trunk," with minimal set, costumes, props and a focus on actors, as per the style of Shakespeare's time.

"The Summit Players' mission is to promote overlap between nature and the performing arts by providing accessible outdoor theater to young people and their families," said A.J. Magoon, an actor and public relations director for the troupe.

Prior to each performance, the company members will lead a 45-minute workshop, "Playing with Shakespeare: Get Outside with Will," for children ages 8 and up. The workshops focus on understanding Shakespearean text, general theater practices, and how Shakespeare used nature in his plays.

Two performances will be held on the same day at four park properties: Devil's Lake, Kohler-Andrae, Lake Kegonsa and High Cliff state parks. At these parks the troupe will perform a "Midsummer Night's Dream" at the 2:30 p.m. matinee and "As You Like It" at the 7 p.m. eventing show. At parks with just one performance, the audience will get to select which of the two shows the troupe should perform.

The Summit Players held their first Shakespeare in the Park performances last summer at 13 state park properties. Magoon said because the performances were popular and well attended, the troupe decided to continue it this summer, expanding to more parks around the state.

"The Summit Players are committed to making the arts available to everyone regardless of income; both the workshops and performances are free of charge to park patrons. We are meeting production costs through a crowdfunding campaign and have currently met about 65 percent of our goal," Magoon said.

The one performance not held at a Wisconsin State Park property is at Three Bridges Park in the Menomonee River valley, which is located along the Hank Aaron State Trail. The Department of Natural Resources was a partner in the environmental remediation and redevelopment of the Three Bridges property.

People can find out more about the Summit Players at their website www.summitplayerstheatre.com (exit DNR).

Shakespeare in the Park 2016 schedule.