"We are finding white-nose syndrome on a widespread basis, and the largest sites are all home to the fungus responsible for this disease," said Paul White, Department of Natural Resources conservation biologist leading the Wisconsin Bat Program (exit DNR). 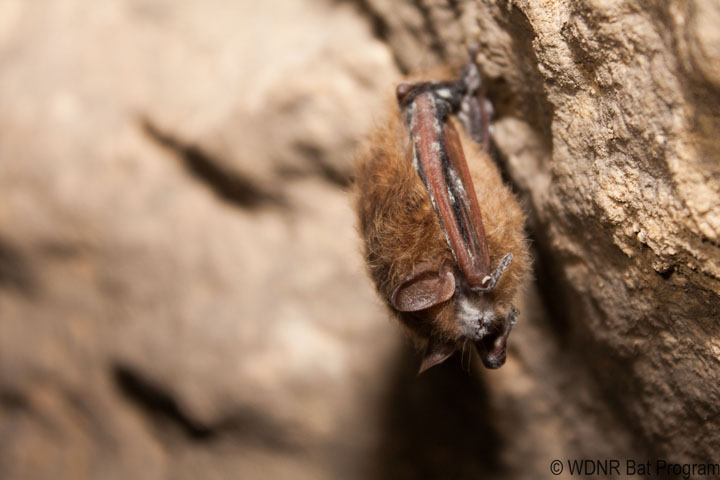 White-nose syndrome does not affect people or other animal species, but causes hibernating bats to frequently wake, depleting their energy and causing them to die from starvation, dehydration or exposure to the elements. Since the discovery of white-nose syndrome in 2006 in New York, upwards of 6 million bats have died and the disease has spread to 28 states. 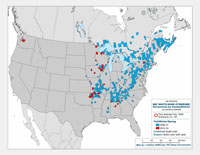 "Those results are what we expected based on what's happened in the eastern United States, but it is still very devastating," White says. "We will continue to look for ways to minimize the effects of white-nose syndrome, but unfortunately, the tools to combat this disease are few and far between."

DNR biologists worked with University of California-Santa Cruz researchers this winter to experimentally treat bats in one mine; results of those tests are still pending.

Bats play an important role in Wisconsin's ecosystems and economy and our state has one of the highest concentrations of hibernating bats in the Midwest. Bats are voracious insect eaters, and a 2011 North American study estimated that bats save Wisconsin's agriculture industry between $658 million to $1.5 billion annually in pesticide costs.

Over the last decade, DNR took actions in Wisconsin that helped delay the arrival of the disease and may have slowed its spread, according to Owen Boyle, species management section chief for DNR's Natural Heritage Conservation Program. Steps included adding four bat cave species to the state threatened species list, working with private landowners to help keep the disease out of caves and mines, requiring cave -users to decontaminate their gear between caves, and enlisting volunteers to help track bat populations.

With white-nose syndrome spreading, volunteers are critically important to collect information about how the disease may be affecting cave bat populations.

"Volunteers played a vital role in advancing knowledge about bat populations in Wisconsin and now that white-nose syndrome is here, their help is even more important to understand how the disease is impacting our bats," White says.

Volunteers are needed to count the bats emerging from bat houses and buildings in the evening several times during the summer and for the Great Wisconsin Bat Count, scheduled for June 3-5 and July 29-31. Information and observations from roost monitoring volunteers have enabled the Wisconsin bat program to create a database of more than 200 roost locations and population estimates across Wisconsin, shed light on bat roosting behaviors, and fuel more research. 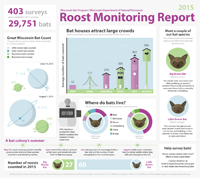 Volunteers also are needed to drive, paddle and hike along pre-set routes with bat detectors, listening for bat echolocation calls that can help identify bat species and locations. Such acoustic monitoring volunteers have enabled Wisconsin to identify ranges of species found in the state while also investigating relative abundances.

For more information regarding volunteer opportunities, visit the Wisconsin Bat Program website or contact Paul White at 608-267-0813 or Heather Kaarakka at 608-266-2576.