[EDITOR'S ADVISORY: this news release has been updated to correct the number of occurrences of wood turtles historically in Wisconsin.]

"Our conservation strategy is designed to ensure that wood turtles remain an integral part of Wisconsin's natural heritage into the foreseeable future by focusing on conservation activities with the greatest benefit to the species," says Owen Boyle, who leads Department of Natural Resources nongame species management staff. 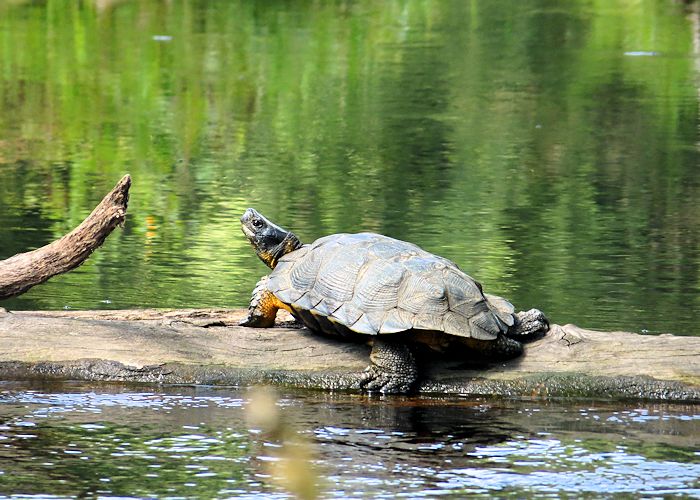 That study revealed that some nest protection methods were very successful in protecting turtles, decreasing predation rates from 52 percent to 17 percent. As well, a new citizen-based monitoring program, the Wisconsin Turtle Conservation Program, has resulted in hundreds of reports of problematic road crossings and has enabled DNR and partners to work together to help put up signs, build tunnels, and find others ways to make the crossings safer.

Wood turtles, (Glyptemys insculpta), are secretive, long-lived animals found in roughly the northwestern two-thirds of Wisconsin. They are most abundant in forested regions with medium-sized rivers. Wood turtles were listed as an endangered species in 1975 when only 22 documented occurrences, or populations, were known. Their status was upgraded to "threatened" in 1982 as the number of occurrences grew to 75. Today there are 301 documented populations, more than any other Midwestern state. While all of these populations are not regularly monitored, a significant number are believed to be robust, viable populations.

"Through statewide surveys, research, and citizen reports, we've learned there are far more wood turtle populations in Wisconsin than we knew about in the early 1980s," Boyle says. "Our strategy outlines how we will expand population monitoring to closely track population trends into the future."

When DNR updated its endangered and threatened species list in a process ending in January 2014, the department retained the "threatened" status for wood turtles until it could complete the Wisconsin turtle study. The conservation strategy relied on this new research information, existing DNR data, and information submitted by external wood turtle stakeholders during a public information request.

Part of developing the strategy included using that new information to assess the species' legal status. DNR conservation biologists determined wood turtles no longer met the criteria to remain on the state's list of threatened and endangered species. As a result, the department recommends removing the species from the threatened list but legally designating it a Protected Wild Animal, which bans the harvest, collection or purposeful killing of the species, Boyle says.

The strategy details the monitoring methods DNR and partners will use to track population trends and includes criteria by which the species will continue to be assessed.

A status change for listed species is accomplished through the administrative rule process, which includes Natural Resources Board approval and a public input process that can take up to a couple of years to complete.

Until the change in status is finalized, the DNR has drafted a Broad Incidental Take Permit/Authorization for wood turtles. Incidental take refers to the unintentional loss of individuals of endangered or threatened species and is illegal in Wisconsin without a permit. The Broad Incidental Take Permit/Authorization sets forth the specific conservation measures that projects would be required to follow when operating in areas where wood turtles have been found.

DNR staff determined that projects covered under the proposed broad incidental take permit might result in the incidental taking of some turtles but will not jeopardize the continued existence of this species. Copies of the jeopardy assessment and background information on the wood turtle are available by searching the DNR website for incidental take public notice or upon request from Owen Boyle (608-266-5244 or owen.boyle@wi.gov).

Public comments on the Broad Incidental Take Permit/Authorization will be accepted through May 19, 2016. Comments on the BITPA or questions regarding the Conservation Strategy should be sent to Owen Boyle, Wisconsin DNR, PO Box 7921, Madison, WI 53707-7921 or owen.boyle@wi.gov.