WILD ROSE, Wis. - After a year of careful rearing at the Department of Natural Resources Wild Rose Fish Hatchery, some 6,000 Great Lakes spotted muskies are set to begin the next phase of their journey, getting ready to test Wisconsin anglers and serve as brood stock in select state lakes. 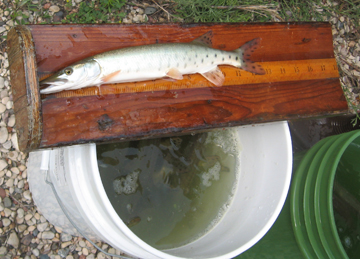 Now averaging about 16 inches and weighing 11 ounces each, the Great Lakes spotted muskies have put on considerable size and weight since their arrival in 2014.
WDNR Photo

The muskies arrived in 2014 from Wolf Lake State Fish Hatchery in Michigan as part of a cooperative effort to improve musky genetics in both states, said Steve Fajfer, supervisor of the Wild Rose Hatchery. While Michigan recently has focused on the Great Lakes spotted strain, Wisconsin's successful inland musky breeding program is contributing fish to help expand Michigan's stocking program in the Upper Peninsula.

"These young fish are looking great and they've been growing very well on a steady diet of fresh minnows," Fajfer said. "The fish now average about 16 inches and weigh 11 ounces each. From all indications these fish have great growth potential and we're predicting an average adult size of nearly 53 inches for the females and 47 inches for the males."

Wisconsin DNR fisheries biologists are working to increase the genetic diversity of the musky population in the waters of Green Bay and Lake Michigan to restore a strong and naturally reproducing population of fish there. The waters of Green Bay, Sturgeon Bay and area tributaries including the Lower Fox and Menominee rivers have become known as great destinations for musky fishing.

This year's fish, originating from spotted musky spawned from Lake St. Clair, are expected to create even more exciting opportunities in the years ahead, said Tim Simonson, a DNR fisheries biologist and musky specialist.

"The excellent forage base in Green Bay and the surrounding waters provides ideal habitat for the fish, which will be well suited to these waters," Simonson said.

DNR's plan for the fish is twofold. To provide a reliable source of future genetics, some 2,600 of the fingerlings will be placed in three brood stock lakes where they will contribute to future generations of purebred spotted muskies. Lakes chosen for this special role are Elkhart Lake in Sheboygan County and Anderson and Archibald lakes in Oconto County.

"Establishing three brood stock lakes allows us to put them on a rotation schedule for future egg collection that will help ensure the fitness and diversity of subsequent generations of fish that are eventually stocked back into the Great Lakes," Simonson said.

The remaining fish will be planted directly into Green Bay, the Menominee River and the Fox River, Simonson said. There, they will contribute directly to the trophy fishery and perhaps also increase the likelihood for sustained natural reproduction. While some natural reproduction has been documented in the region, DNR fisheries managers are pursuing both the introduction of the new fish and continued habitat improvement efforts to move closer to this goal.

Fajfer and Simonson said much of the work has been made possible thanks to the support of private sporting and conservation groups. Key to the effort has been the generous support of the Musky Clubs Alliance of Wisconsin and several of their member clubs, including C & R Musky Club, Dave's Musky Club, Titletown Chapter of Muskies Inc. and Winnebagoland Musky Club, among many others.