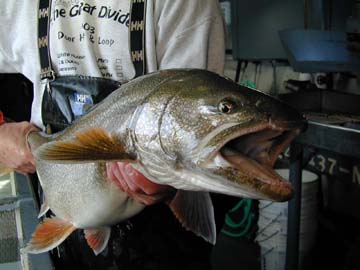 A public hearing will be held on a emergency rule was designed to ensure the long-term sustainability of the lake trout fishery in the Apostle Islands area. DNR Photo

ASHLAND, Wis. -- A public hearing on an emergency rule designed to support recovery of lake trout populations in Lake Superior will be held by the Wisconsin Department of Natural Resources on Feb. 16 from 5 to 9 p.m. at Ashland High School.

Terry Margenau, DNR Lake Superior fisheries supervisor, said the emergency rule was necessary because population assessments over the last six to eight years have indicated that the decline in lake trout abundance is largely due to harvest. Lake trout are capable of living in excess of 40 years and do not reach sexual maturity until they are eight to 10 years of age. Thus, it's critically important that the stock be carefully managed, as the welfare of many stakeholders, including commercial fishers, sport anglers, and a host of associated businesses, depends on a strong lake trout fishery in the Wisconsin waters of Lake Superior.

"The upcoming public hearing provides citizens with the opportunity to offer feedback and continue the dialogue started at a meeting held in early December prior to the Natural Resources board action," Margenau said. The hearing will focus on the need to extend the emergency rule beyond 150 days through early June, to cover the entire lake trout season, which runs through Sept. 30, 2015.

The Feb. 16 public hearing will be held in the auditorium of Ashland High School, 1900 Beaser Ave. A short summary presentation will be followed by an opportunity for citizens to provide oral and written comments. In addition, written comments may be submitted until Feb. 16 to: Terry L. Margenau, Lake Superior fisheries supervisor, Wisconsin Department of Natural Resources, PO Box 589, 141 S. Third Street Bayfield, WI 54814; or emailing terry.margenau@wisconsin.gov