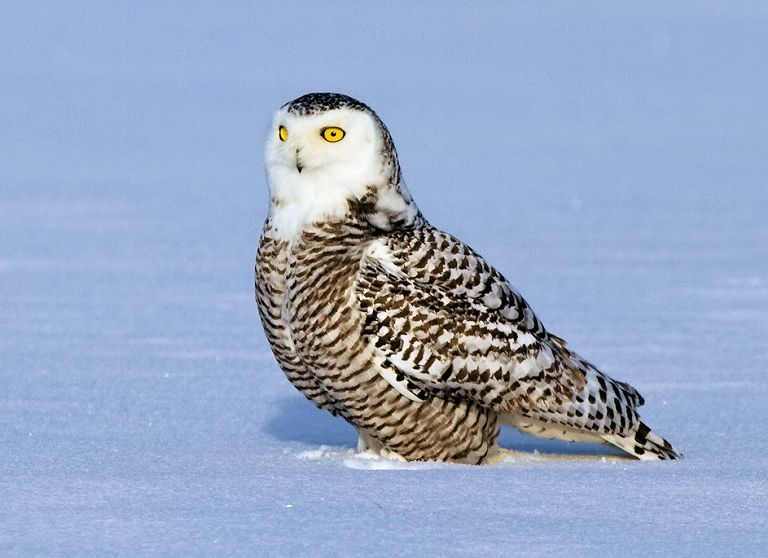 Snowy owl sitings are on the rise agiain in Wisconsin (photo by Scott Weberpal).

MADISON - For a second consecutive year, snowy owls are returning to Wisconsin in large numbers.

Ryan Brady, a Wisconsin Department of Natural Resources research scientist, has been tracking this year's irruption and reports that approximately 239 different owls have been reported statewide, compared to 224 as of this date last year. Both totals are far above average.

A map of this year's sightings can be found here.

"Many Wisconsinites recall the winter of 2013-14 as one of the best on record, so it's surprising that we are seeing similar or even slightly better numbers this winter, " said Brady, who also serves as bird monitoring coordinator for the Wisconsin Bird Conservation Initiative. "We usually see one irruption event every three to five years, but Wisconsin has experienced three in the past four winters."

According to Brady, the reason for these periodic influxes into the state, also known as irruptions, is not well known. Traditional thought suggested that a temporary shortage of the owl's primary prey in the Canadian arctic, a mouse-like rodent known as a lemming, pushed owls southward. However, more recent evidence suggests nearly the opposite. It is believed that an abundance of lemmings may allow birds to raise large families - these young owls then disperse southward into the region by the hundreds.

Snowy owls face many challenges during their time here and, like many birds, a significant proportion of them, especially young ones, will not survive. Primary mortality factors include collisions with vehicles, electrocution, secondary rodenticide poisoning, disease and illegal shooting.

However, snowy owls in Wisconsin tend to fare no more poorly than other avian visitors.

"A common myth is that the majority of these birds are starving in an unfamiliar landscape," said Brady. "However, decades of data and experience indicate this is not true."

Many snowy owls find exactly what they need in Wisconsin and neighboring states, and generally seek out open habitats similar to the arctic tundra they call home. Common habitats include coastal beaches and harbors, open grasslands and agricultural fields, wetland complexes, airports, and vast expanses of ice-covered water bodies. Snowy owls are not averse to civilization, however, and are often found in suburban or even urban settings.

Given their preference for lemmings in the arctic, owls in Wisconsin tend to focus on voles, mice, shrews, and other small rodents for food. Snowy owls are also known to pursue rabbits, weasels, pigeons, and ducks.

Snowy owls are currently being seen in most non-forested areas of the state. To find one, Brady recommends consulting a map of sightings from Wisconsin eBird. Hotspots include airports and farm country from Green Bay to Appleton, Collins Marsh State Wildlife Area, Horicon Marsh, the Antigo area, the city of Superior, Dunn County, Milwaukee lakefront, and the Highway 29 corridor between Wausau and Eau Claire. However, Brady noted that there are certainly new birds to be found, and all suitable habitats are worth exploring.

While snowy owls can be seen during the day, the dawn and dusk periods often provide a better chance of success. Interested bird watchers are encouraged to explore area roads and all potential perches carefully, including ground-level, haybales, fenceposts, telephone poles, breakwalls, silos and other buildings.

Snowy owl sightings should be reported through the Wisconsin eBird website, and if you discover a bird that appears sick or injured, contact your local wildlife rehabilitator. For more information, visit dnr.wi.gov and search keyword "rehab."

It is important to take great care in viewing snowy owls and help make sure the bird's safety is not placed in jeopardy.

Some general recommendations for observing snowy owls include:

"In many cases, you may not be the only person to see an owl, and the cumulative impacts of these actions can be especially harmful," said Brady. "If, for example, you flush an owl trying to get a photo and another person comes along and does the same, that owl has wasted precious energy and will be less equipped to survive."

Snowy owls are expected to maintain their Wisconsin residence through March before beginning their northward migration back to arctic Canada.

"These are magical creatures - stunning in appearance, unpredictable, mysterious, and the epitome of wild," said Brady. "I may never visit their remote haunts thousands of miles to the north but seeing one here brings a sliver of that wilderness to me."