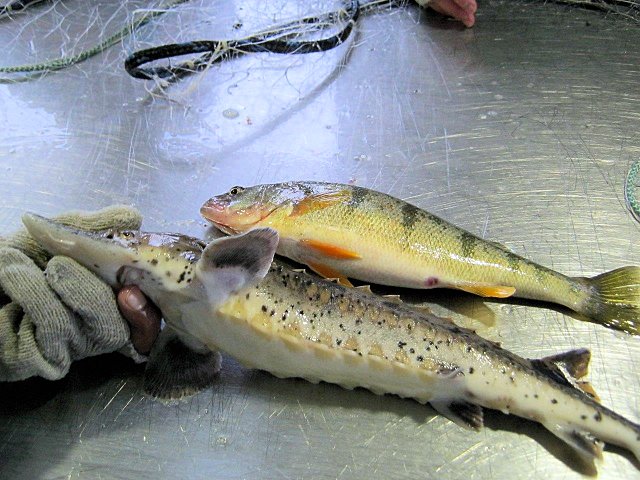 This young lake sturgeon picked up off of the shores of Milwaukee hails from the Kewaunee River where it was hatched at the C.D. "Buzz" Besadny Anadromous Fish Facility. Just two years old and nearly 18 inches, it outstrips the perch above.

KEWAUNEE, Wis. - Just off the shores of Milwaukee, in the frigid waters of Lake Michigan, a young sturgeon from Kewaunee appears to have found a healthy home.

While the Milwaukee shoreline serves as a proven nursery to sturgeon released nearby through a cooperative rearing program between the Wisconsin Department of Natural Resources and Riveredge Nature Center, the discovery of the Kewaunee fish marks the first time DNR researchers have confirmed a young sturgeon recaptured there was bearing a tag from the C.D. "Buzz" Besadny Anadromous Fish Facility.

"We're happy to know that sturgeon we are producing in Kewaunee are thriving in Lake Michigan and this finding reinforces the importance of protecting key shoreline habitat," said Mike Baumgartner, manager of the Besadny facility. "By raising the fish in our streamside rearing facility on the Kewaunee River, we believe they imprint on the waters and eventually will return here for spawning. But in the meantime, it's quite a feat for a young fish of this size to travel more than 100 miles to Milwaukee."

The fish originated from a batch of eggs collected from seven females spawning on the Wolf River at the dam in Shawano on April 9, 2012. Just before its release into the Kewaunee River as part of an open house adopt-a-sturgeon event on Oct. 6, 2012, the fish was equipped with a tiny identification tag and measured 7.6 inches long. At that time, it weighed 32.9 grams - roughly equal to a quarter cup of flour.

When it was picked up in a graded mesh net by crew members off the research vessel Coregonus as part of Lake Michigan fisheries research in recent weeks, the fish had grown to 17.9 inches long with a 7.8 inch girth. What is it about the region's habitat that helps young sturgeon and other fish thrive?

"We know the Lake Michigan environment offshore from Milwaukee and in other areas offers important advantages including suitable habitat and food supply for young sturgeon," said Brad Eggold, DNR Lake Michigan fisheries supervisor. "Although we don't know where that young sturgeon will spend the months and years ahead, we can say it appeared to be very healthy and had found an excellent source of food at the time of capture."

While sturgeon were once abundant in Lake Michigan and key Wisconsin tributaries to the lake, by the early 1900s overfishing and habitat destruction nearly eliminated the Lake Michigan sturgeon population. By some estimates, fewer than 5,000 adult sturgeon remained in the lake prior to the stocking efforts, Baumgartner said.

DNR's stocking efforts have produced 10,735 sturgeon for release in the Milwaukee area since 2006 and 6,903 in the Kewaunee River since 2009. Baumgartner said initial success of the work at Kewaunee will likely be known in about 10 years, when some of the first males are expected to return to the river as they reach maturity. It takes the females more than 20 years before they are ready to spawn.