MADISON - The Wisconsin Wetlands Association honored long time aquatic ecologist Bob DuBois on November 6 for his outstanding efforts to promote the protection, restoration and enjoyment of wetlands in Wisconsin through dragonfly research and citizen science outreach.

DuBois, who started with the Department of Natural Resources in 1983, was originally hired on as a trout researcher. Following the encouragement of his fellow colleagues, he decided to change directions and pursue his passion for aquatic insects. 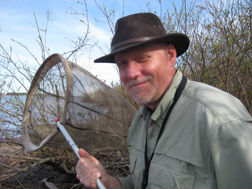 In 1994, DuBois saw the opportunity to popularize an insect that people were fascinated with but had little information about. At the time, there were no field guides for dragonfly species. Since then, he's written and published two field guides to help scientists and citizens alike in identifying the creatures.

In addition, DuBois coordinates citizen monitoring efforts through the Wisconsin Odonata Survey, which gathers information and observations on dragonfly distributions and habitats statewide to fill previous gaps in knowledge. Since 2002, the survey has noted over 10,000 dragonfly records including the discovery of a number of new state-record species.

In 2012, DuBois founded the Wisconsin Dragonfly Society, which created a structured environment for interested citizens to connect and share their findings as well as engage in the outdoors. This summer, the Wisconsin Society along with the National Dragonfly Society of the Americas co-hosted nearly 100 participants from 25 states and Canada in the Northwoods for their annual meetings.

Executive Director for Wisconsin Wetlands Association Tracy Hames said a big part of their motivation to recognize DuBois was in part due to the fact that dragonflies are largely a wetland specific group but also because in his work DuBois has engaged citizens, encouraged them to get outdoors and made them excited about dragonflies and protecting their habitat. 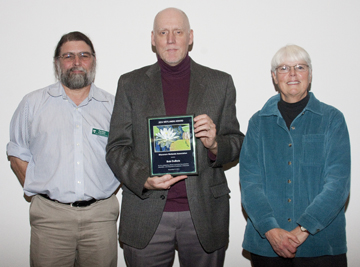 "Through Bob's work with the survey and the dragonfly society, he is making Wisconsin one of the leaders in the Odonata by furthering the science and excitement around the species," said Hames.

DuBois continues to be motivated to serve this mission and centers his work on involving and engaging people in nature, especially youth. His early experiences with youth inspired him to shepherd citizen engagement as a major initiative for gathering dragonfly information.

"I remember one time when I brought in a live dragonfly to show a class of sixth graders. They were so excited about it and their reaction was so striking, it left a lasting impression." said DuBois. "That's when I realized the huge opportunity for citizen science; it was a door just waiting to be walked through. It's all about getting people engaged. People won't protect what they don't love, and they can't love what they don't know."

For more information on monitoring dragonflies or to join the Wisconsin Dragonfly Society, visit http://wiatri.net/inventory/Odonata/. People who know of someone deserving of recognition for their work to protect wetlands can nominate them for next year's Wisconsin Wetlands Association Awards in February.

The Wisconsin Wetlands Association was established in 1969 and works to protect the state's wetlands resources through education, training, advocacy and research. The organization is one of the first statewide groups to focus exclusively on wetlands protection and has close to 1500 members, including scientists, educators, conservationists, hunters and citizens.