This award recognizes the best work in protecting a threatened historic property in Wisconsin.

"We are extremely proud of Carolyn's work at Whitefish Dunes and her personal commitment to preserving these artifacts and introducing our park visitors to this fascinating part of Door County's and Wisconsin's history," said Department of Natural Resources Secretary Cathy Stepp. "The recognition by the State Historical Society of Carolyn's work is truly a well-deserved honor."

Among Rock's efforts are rescuing pieces of the 13 known shipwrecks of Whitefish Bay as various bits wash up upon the beach and assembling the fragments for a summertime "junior underwater archaeologist" education program. Participating children learn about the shipwrecks of the Bay and ship terminology from the pieces of wood laid out on the beach before them. 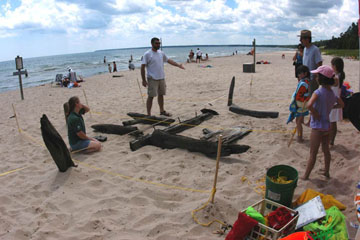 In 2011 Rock hosted a Great Lakes Maritime Transportation Teacher Institute, a conference where she taught methods of scale drawing with the shipwreck elements. In 2009, she arranged to take in two illegally salvaged ship's anchors that were brought up during dredging activities in Sturgeon Bay, giving them a permanent home for public display. Again in 2013, she came to the rescue and provided a home for an entire ship's stern with gudgeon that was turned over to Society archaeologists in Ephraim.

Starting in 2011, with the support of the Friends of Whitefish Dunes State Park (exit DNR) and a volunteer with welding expertise, Rock began assembling a permanent outdoor shipwreck exhibit with the rescued pieces near the park's picnic shelter. The exhibit called "Shipwrecks: When Wood and Metal Tell Stories" has interpretive signage, which was funded through independently raised funds from the Raibrook Foundation and a Natural Resource Stewardship grant.

Rock was also instrumental in establishing the partnership between the Society's Maritime program and all five of Wisconsin State Parks located in Door County (also including Potawatomi, Peninsula, Newport, Rock Island). Four of the parks exhibit one or more Maritime Trails Markers and all five parks participate in the Maritime Geocaching program. Geocaching is a treasure hunt where people use hand-held Global Positioning System devices to guide participants on a tour of historically important places in Wisconsin's maritime past. The tour culminates in finding a hidden container or "cache," and then logging the experience online at Geocaching.com. 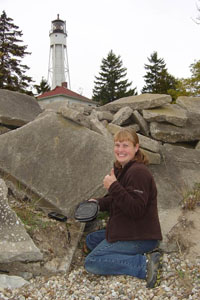 Carolyn Rock with one of the 13 maritime geocaches located all over Door County.
Tamara Thomsen - Wisconsin Historical Society Photo

Rock maintains the society's 13 maritime geocaches located all over Door County and conducts maintenance on her own time so this alternative learning initiative can continue. Additionally, she wrote and published a booklet "Maritime Geocaching in Door County" that is distributed at the State Parks.

During a 2012 survey of the wooden bulk carrier Australasia, Rock set up a spotting telescope on the beach at the park, established marine radio contact with the Society's boat to put beach goers in direct contact with the archaeologists on site -a program she called "Ask Diver Paul," allowing the public to ask questions and learn about the resource immediately off shore.

"Without the efforts of Carolyn Rock, many of the partnerships that are the keystone to the Maritime Trails initiative would not be as strongly established. She has proven herself a long-time supporter of many of the Society's outreach programs, as well as efforts to document Wisconsin's shipwrecks and tell their stories," her nomination for the award noted.

The award will be presented to Rock at a ceremony at 3:30 p.m. Wednesday, Sept. 17 in Room G09 of the State Natural Resources Building, 101 S. Webster St., Madison.