EDITOR'S ADVISORY: Zeloski Marsh trail opening delayed. Heavy rains early in the week have forced a delay in the announced opening of a new 2.5 mile bike and hiking trail in the Zeloski Marsh unit of the Lake Mills State Wildlife Area. The trail was to have opened Sept. 1. No date for the trail opening is available at this time.

MADISON - Hikers and bicyclists have additional trails to explore in Wisconsin this summer and fall with the opening of three new trails this summer.

In July, an 8-mile paved trail was completed through the Northern Highland-American Legion State Forest connecting the communities of Manitowish Waters and Boulder Junction. With the completion of this section the paved trail system in Vilas County stretches for approximately 45 miles, running almost to Eagle River. The paved trails began with the first segment connecting North Trout campground to the town of Boulder Junction, funded with a combination of Stewardship and Wisconsin Department of Transportation funding. The new section was primarily funded by the Manitowish Waters Trail Foundation (exit DNR).

The Department of Natural Resources contributed forest land for most of the trail and a gravel pit to provide construction material. The trail goes through some rustic parts of the forests and across some wetlands. One of the main features of the trail are long boardwalks that cross wetlands and Rice Creek.

And as of last weekend, cyclists can ride more easily between Tomahawk and Minocqua with the completion of phase one of the Bearskin and Hiawatha trail connection.

DNR finished building a 6-mile connector stretch that joins the two major trails together in August. The total ride is 32 miles, almost all of which is on designated bike trail. There are still 4.5 miles of riding on county roads; future plans for the project would replace those sections with bike trail in phase 2. 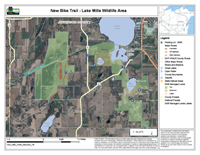 On September 1, (the opening has been delayed by heavy rain earlier this week) a new 2.5 mile recreational trail on the Zeloski Marsh Unit of the Lake Mills Wildlife Area in Jefferson County is set to open. The new trail will connect a planned Jefferson County's London Road bicycle route with the Glacial Drumlin State Trail.

Construction of the bicycle trail was envisaged in the Glacial Heritage Area master plan approved by the Natural Resources Board in 2009. The Glacial Heritage Area is a coordinated series of parks, preserves, wildlife and natural areas and other conservation lands that are linked together and to nearby cities and villages with different types of trails.

The new trail will provide excellent wildlife viewing opportunities for cyclists and hikers, according to Mark Witecha, a DNR wildlife biologist who oversees the property.

A state trail pass is required for bicyclists on the Bearskin and Glacial Drumlin state trails but the pass in not required for the Manitowish Waters-Boulder Junction trail or the Zeloski Marsh trail.