STURGEON BAY, Wis. - Stainless steel tags smaller than a pencil lead and the "Dr. Seussian" machine that can implant them in 8,000 fish per hour are unlocking the secrets of chinook in Lake Michigan, the biggest predator on the big pond. 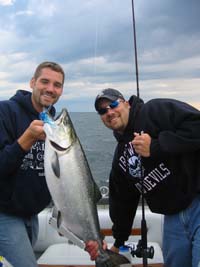 A new fish tagging project is showing that stocked chinook swim all over Lake Michigan and those caught in Wisconsin waters are just as likely to have originated in Michigan hatcheries.

Loaded with information about where and when each fish was hatched, the tags are already showing that chinook caught by anglers in Wisconsin waters of Lake Michigan were just as likely to come from Michigan as from Wisconsin.

Legler cautions that it's important to remember that the information biologists have so far is based on a few years' tag returns. "We expect much better information once we have four to five year-classes tagged and those returns analyzed."

Importantly, the tags will also eventually help better document just how many fish are naturally reproduced and how many come from hatcheries. That's a key question because in the 1960s, when Wisconsin and other states first began stocking chinook to control alewives, an exotic fish, 100 percent of the chinook caught in the lake by anglers were from hatcheries, Legler says.

In more recent decades, natural reproduction has come on strong in Michigan tributaries and a study started in 2006 and continuing in 2012 suggests that on average 55 percent of the 1-year-old fish in the lake were naturally reproduced.

"The key to a healthy fishery in Lake Michigan, which has a pretty disrupted ecosystem, is balancing predator fish like chinook with prey fish," Legler says. "If more fish are being naturally reproduced, we need to take that into account when we stock."

The states and Michigan tribes with management responsibilities on Lake Michigan recently agreed to adjust stocking starting in 2013 to offset the increased number of naturally reproduced chinook and low levels of prey fish.

More of these tag returns and the information they provide are expected in coming years because the tagging machines, brought to Lake Michigan hatcheries by the U.S. Fish & Wildlife Service starting a few years ago, will continue to mark all hatchery-raised chinook salmon.

Those fish are now becoming big enough where they can be caught by anglers or are making their spawning runs up the tributaries where DNR and other states collect eggs.

Legler says that tags from chinook making their spawning runs up Lake Michigan streams will enable DNR and partners to know whether most of the fish stocked in Wisconsin return to the water in which they were stocked, or whether they stray from that site. This winter, DNR and USFWS biologists also will be analyzing tag returns in chinook processed at DNR's Strawberry Creek egg collecting facility. More than 800 chinook heads were collected for analysis at that facility, as well as at DNR egg collection facilities in Kewaunee and Racine.

"The tags that we collect from our spawning facilities during the fall will allow us to learn more about straying rates," Legler says. "They also can allow us to determine the exact age of a marked fish, and we can then compare each fish's age to its weight to evaluate growth rates, ecosystem predator-prey balance, etc. "In the future, Legler expects DNR will ask anglers who harvest chinook in the fall during the salmon runs on the tributaries to donate chinook heads to DNR for analysis of the tags in the fish.

"By collecting heads from anglers during the fall, we hope that we'll be able to acquire data that will help us to determine when and where mature salmon begin staging, before the fall spawning event."