Groundbreaking on the shelter began in July and the shelter is nearing completion at Blue Mound State Park, which is located about 45 miles west of Madison in Iowa County. The friends group hopes to have the facility open in time for the park's first candlelight cross-country ski on Jan. 8, 2013.

"This is truly a profound gift to the state of Wisconsin," said Department of Natural Resources Secretary Cathy Stepp as she asked the board to accept the donation. "This shelter will be used year-round by the many visitors to Blue Mound and will be a great asset to enhance visitors' use of the park." 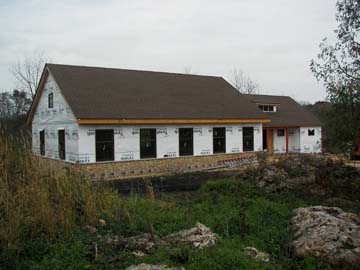 Stepp said that as part of the donation, the group has requested the board officially designate the new building as the "Friends Shelter," which the board approved in their motion to accept the donation.

The Friends of Blue Mounds raised $500,000 for construction of the shelter, primarily through sponsorship of the Horribly Hilly Hundreds bike ride, which has been held over the past 10 years, and also through grants from the state Knowles-Nelson Stewardship Program, the Courtier Foundation and the Chris Funk Memorial Fund and direct donations to the friends group.

The Horribly Hilly Hundreds is billed as the "toughest one-day challenge ride in the Midwest" and offers 100, 150 and 200 kilometer alternative rides over some of the highest hills of southern Wisconsin. The ride has grown in popularity from its inception in 2003 when 400 riders took part to as many as 1,300 riders participating in recent years.

The ride, held in mid-June, begins in the Village of Blue Mounds and ends with riders climbing up Blue Mound and finishing in the park.

"The Horribly Hilly Hundreds has been an extremely successful fundraising event for our group and we hope it serves as a model for other friends groups on how signature events that take advantage of a property's unique features can be used to help support and improve their parks," said John Koffel, Friends of Blue Mound board member.

"With the highest elevation in southwestern Wisconsin, Blue Mound State Park is a destination park for many bicyclists and cross-country skiers," says Dan Schuller, Wisconsin State Parks director. The park attracts 150,000 visitors annually, many coming during the winter months, with the park's cross-country ski and snowshoe trails recognized as some of the best in southern Wisconsin. The Friends Shelter will serve as a warming house for skiers and snowshoers.

The Wisconsin Off-Road Bicycle Association has partnered with the DNR to create off-road mountain bike trails in the park, which has boosted its reputation for offering challenging bicycling. Blue Mound is also the only state park with a swimming pool, which the new Friends Shelter is adjacent to.

Al Swain, volunteer park naturalist and also a member of the friends group, noted the Friends Shelter will likely be used extensively for naturalist programs.

"We're no longer going to have to cancel programs due to rain or bad weather, we will now have a facility where we can move the program indoors," he said.

The Friends of Blue Mound State Park will continue fundraising to outfit the indoor and outdoor needs of the building. Chairs, tables, patio, etc. are all part of making the structure meet its goal of being a family friendly space. The group hopes to raise an additional $30,000 to complete all aspects of the project.