MADISON - The avian parade continues with hummingbirds, warblers and vireos the next species to begin their migration south, providing Wisconsin birders some great viewing opportunities and experts more insight into how the early spring and drought has affected Wisconsin's winged travelers. 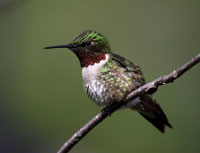 Hummingbirds are among the next wave of winged migrants to head south.
Ryan Brady Photo

"The next three weeks will be the peak of fall migration for land birds that migrate to central and south America," says Andy Paulios, a Department of Natural Resources biologist. "We're past peak for orioles, but birders should expect to see good numbers of hummingbirds, warblers, vireos, thrushes and other migrants in their local migration hotspots or even in their backyard if they have good natural cover."

Paulios says that birders should also watch the skies over the next few days as they could expect to see migrating common nighthawks and chimney swifts in the evening.

What exactly will turn up and when on the landscape and at birdfeeders, however, is uncharted territory given the warm, early spring, record heat and the drought experienced in much of the state, says Kim Grveles, an avian biologist with DNR's Endangered Resources Bureau.

"It's hard to know exactly what we'll see with migrations this fall," Grveles says. "Warm weather definitely brought the short-distance (overwinter in southern U.S.) migrants up north earlier than usual and some long-distance migrants as well. But they do not seem to be leaving for wintering grounds sooner."

Paulios suspects that migration through drought-stricken areas of Wisconsin will be more stressful this year. "My guess is that there will be less food for insect eaters in dry years as many insects have moisture-dependent abundances...but birds are very adaptable and may be able to move or adjust along their routes."

"Homeowners can always help by providing a water source and by providing native trees, shrubs and herbaceous plants that produce lots of bugs and fruit for birds to eat and shelter during migration," he says.

Gveles says that the hummingbirds she's seen in the Madison area are struggling to find food because the blossoms just aren't there because of the drought. "So the feeders become really important," she says. "There is less seed available because of things not flowering due to the drought for gold finches and even for migratory birds that depend on seeds, like towhees, finches and grosbeaks.

"Flyover land" a vital stopover in fall and birding mecca

Every spring and fall, tens of millions of migrating birds sweep through Wisconsin and other Great Lakes states and stop at a variety of sites on their way to breeding grounds as far north as Greenland and the Arctic Ocean and wintering grounds as far south as Argentina's Tierra del Fuego. These stopover sites provide birds with critical food and shelter en route, a function described in "Respites for Migratory Birds," in the August 2011 Wisconsin Natural Resources magazine.

"The beauty of migration is you don't have to go to the world's best birding place to see these beautiful birds," Paulios says. "On some days, these things will be in your backyard. So explore your local parks and natural areas."

Paulios says the general rule of thumb for finding fall migrants is to look for shrubby, woody edges with morning sun. These places tend to have the right mix of fruit and bugs, especially if they get morning sun. Native bushes and trees with fruit like black cherry trees, viburnum or dogwoods are a draw for many bird species.

Baltimore orioles have already peaked, and it's past peak for shorebirds as well but they are still around. Late September and early October, the sparrows and ducks will be stopping over, he says.

Paulios advises checking sites like Wisconsin ebird (exit DNR) to see what species are showing up where. Also, birders can check their local areas for sites listed on the Great Wisconsin Birding and Nature Trail (exit DNR).

Nationally and in Wisconsin, birdwatching is big and growing. Earlier this month, federal officials released national results of their recreation survey (exit DNR) and showed that 46.7 million Americans 16 and older watched birds in 2011; 33 million adults fished and 13.7 million hunted in 2011.

State statistics from the survey are to be released later, but the most recently available state statistics (which date to 2006) rank Wisconsin in the top three states in percentage of birdwatchers: 41 percent of adults 16 and older reported watching or photographing birds.