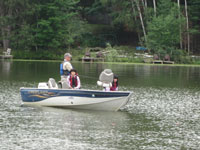 A dozen Chinese teachers and 24 students from that country's most elite high schools and their chaperones spent 18 days in the Midwest in late July and early August. Their visit marks the start of a 10-year relationship between the people of the Mississippi and Yangtze river basins. The program, called Rivers as Bridges, is designed to tie together cultural differences with environmental similarities in a hands-on learning environment.

"What remarkable work these students have done in such a short period of time," explained Wisconsin Department of Natural Resources Secretary Cathy Stepp, "I am extraordinarily impressed by their ability to recognize similarities in our countries' environmental challenges and willingness to work together to tackle tough issues facing both China and the United States."

At a Lawrence University event in Appleton, Secretary Stepp awarded certificates from the Northland Pines School District in Eagle River that recommended each student get a high school credit for work during the study event. Students prepared posters on natural resources topics and friendship and had to explain the posters in English. 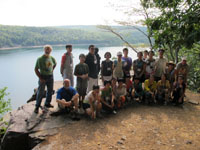 Rivers as Bridges is a multi-year project that responds to Chinese Vice President Xi Jinping's call for imaginative approaches to bi-lateral relationships. He visited Iowa in February and spoke to an Iowa delegation that visited China in June.

Chinese parents paid for the trip which is also supplemented through in-kind and private donations. The Environment and Public Health Network for Chinese Students and Scholars organized the event. More information about the program can be found at RiversAsBridges.org.