AVOID SPREADING A PLANT THAT'S A THREAT TO BATS

MADISON -- A nuisance plant that readily attaches to people working or playing outdoors is being revealed as a threat to Wisconsin bats, spurring state invasive species experts to encourage people to take simple steps to avoid spreading the plant.

"Most people are well aware of common burdock and the seed heads that can cling to your clothing if you work or play outside," says Courtney Ripp, invasive plant specialist for the Department of Natural Resources. "The plant is largely a nuisance for people but we're learning that it can be deadly to bats."

The seed heads of common burdock - the inspiration behind the hook and loop fastener Velcro -- can stick to almost anything fibrous and have been documented to snag the wings of passing bats on their night-time forages for food. The bats get entangled in the seed heads and eventually die due to starvation, Ripp says. 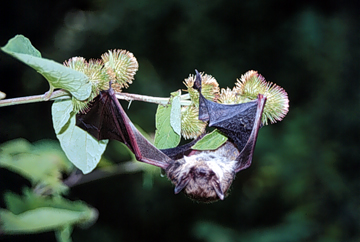 Burdock, a common invasive plant in Wisconsin, can pose a threat to bats.
Dave Redell Photo

"We're asking people - particularly landowners and outdoor enthusiasts -- to help save Wisconsin bats by taking a few simple steps to avoid spreading this plant around," she says.

Everybody who works outside or who hikes, bikes, or otherwise recreates outside should clean off mud, seeds, and other plant parts from clothes, equipment and pets before and after enjoying the outdoors to avoid spreading invasive species to new areas, Ripp says.

Property owners also can help by taking steps to reduce burdock on their land. Burdock is a biennial, which means the plant spends its first year as a leafy rosette and produces a flowering stem its second year that yields flowers and seeds before it dies.

There are simple steps property owners can take during burdock's first year and/or during its second year to keep it from spreading, Ripp says.

Plants in their second season can be cut or mowed when flowers are just about to open. This prevents further seed production.

"Bats play a vital role in keeping nature in balance and in providing critical pest control for our agriculture and forestry industries," she says. "Let's all do our part to keep these important species safe by slowing the spread and managing common burdock and other invasive plants."

Wisconsin has seven species of bats, four of which are listed as threatened due to concerns that the bats are at serious risk from a deadly bat disease, white-nose syndrome, which has killed more than 6 million bats in the eastern U.S. and Canada and was found earlier this summer in caves in Iowa.

Visit DNR's website, dnr.wi.gov and search "Invasives" to find out more about invasive species, or find out how you can help bat populations by visiting the Saving Wisconsin Bats page of the DNR website or visit the Wisconsin Bat Monitoring Program (exit DNR).