STEVENS POINT, Wis. - Two brothers - innovative scientists who retired after brilliant careers with the state Department of Natural Resources - were simultaneously inducted Saturday into the Wisconsin Conservation Hall of Fame.

Robert "Bob" Hunt, 78, of Waupaca, and Richard "Dick" Hunt, 85, of Fall River, were joined by large extended families at the well-attended ceremony. 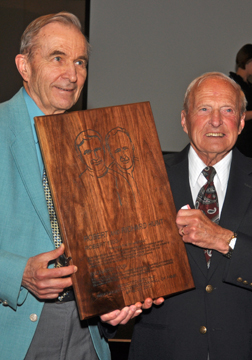 In presenting for Bob Hunt, DNR bureau of fisheries director Mike Staggs described him as "Wisconsin's preeminent trout stream biologist." Hunt's ground-breaking research dramatically changed the management of trout, and trout habitat, not only in Wisconsin but across the country. He has received numerous national honors, including the prestigious A. Starker Leopold award presented once every three years at the Wild Trout Symposia in Yellowstone Park.

"There is absolutely no doubt that trout fishing in Wisconsin is far, far better today than it was when Bob Hunt started his work," Staggs told a large audience Saturday in Stevens Point.

Hunt joined the Wisconsin Conservation Department, later the DNR, in 1959 when Wisconsin's trout program consisted mainly of stocking hatchery fish ill-equipped for survival or reproduction. The streams themselves, degraded by cattle grazing, erosion and other factors were often too wide, too shallow and too warm for trout to grow and survive. Silt covered gravel substrates needed for reproduction.

Leading a research team at the Lawrence Creek station in the 1960s, Hunt was able to prove conclusively that fixing the stream - restoring and stabilizing its banks, narrowing channels, installing rocks and raised half logs that provided cover - would produce more trout and better trout, leading to superior fishing than stocking could ever provide.

The reshaped streams meant faster flows that scoured away silt and dug out deeper holes where large trout could thrive. It meant colder, cleaner water enriched with higher levels of dissolved oxygen.

Hunt's research changed the direction of Wisconsin trout management and was a key factor in the creation of the trout stamp in 1977 that raises segregated funds for stream rehabilitation. More than 900 miles of degraded streams in Wisconsin have been reclaimed for trout because of this work.

Hunt will be remembered for his oft-quoted admonition to "manage first for wild trout."

"Bob's choice of the preposition "for" carries great importance," Staggs said. "People tend to say management of fish, rather than management for them. But wild fish know perfectly well how to manage themselves, if we conserve and, where needed, restore the natural conditions they require."

Older brother Richard Hunt joined the Wisconsin Conservation Department in 1952 and spent his career studying and managing for wild geese and other waterfowl at the Horicon Marsh. He played a key role in efforts to sensitize wildlife managers and sportsmen to the dangers of lead poisoning of waterfowl, especially Canada geese and tundra swans, said presenter James March.

Dick Hunt collected hundreds of dead and dying geese that were analyzed at the Wisconsin Department of Agriculture's Animal Diagnostic Laboratory. As a result, Wisconsin was one of the first states in the nation to switch to non-toxic shot for waterfowl hunting.

Hunt also saved taxpayers the large expense of building a captive-reared mallard release program by designing and conducting research that proved the effort would be of little value.

Serving on the technical section of the Mississippi Flyway Council, Hunt influenced waterfowl and research well beyond state boundaries. He was able to secure sufficient goose quotas for Wisconsin, showing that geese around Horicon were causing unacceptable crop damage.

Aware that wardens and others were not always adept at identifying duck species, Hunt worked with a taxidermist to mount ducks with one wing extended, so that all the important markings were easily visible. For effectiveness of presentation, these were mounted on short poles. The course was popular among wardens who called it "ducks on a stick" training. They are still in use today.

Two other men were inducted posthumously into the Wisconsin Conservation Hall of Fame.

Nils Folke Becker (1891-1962) was a Swedish immigrant, scientist and Rhinelander paper industry executive, honored Saturday as a dedicated conservationist and a leader of the forestry movement in the 1920s. He championed the reforestation of northern Wisconsin through constitutional and legislative action. Becker was the founder and first president of Trees for Tomorrow and was influential in the development of science-based, citizen-led resource management in Wisconsin.

Phil C. Sander (1906-2006) lived his entire life, six months short of a century, in his beloved Des Plaines River Valley in Kenosha where he is known as "Mr. Conservation." A hunter and wanderer as a boy, he developed a deep love for the land and helped form a network of conservation leaders in the 1930s. In 1984, he was part of a citizens group that founded the Des Plaines Wetlands Conservancy, a non-profit organization dedicated to preserving 1,100 acres of ponds, marshes and uplands and two miles of scenic river corridor.

The Wisconsin Conservation Hall of Fame is located in the Schmeeckle Reserve Visitor Center at 2419 North Point Drive in Stevens Point. For information, visit www.wchf.org (exit DNR) or call 715-346-4992.