WARM SPRING MEANS FISH ARE SPAWNING UP TO A MONTH EARLY 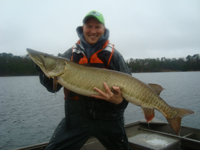 "We're in full blown sampling mode across the state," says Tim Simonson, the Department of Natural Resources fisheries biologist who coordinates fish surveys on lakes. "It's about a month ahead of time in some parts of Wisconsin, so we're doing our best to keep up with the natural cycles of fish in response to the accelerated warming trend we've seen."

DNR crews also are collecting eggs from fish earlier than normal at the state's two facilities that operate in the spring.

The spring fish surveys, however, involve the most people and most waters, and record temperatures in the 70s and even low 80s from Superior to Sturgeon Bay and Menomonie to Milwaukee temperatures during the week of March 18 have disrupted the normal progression of work from southern to northern waters.

Crews are done sampling in some parts of Wisconsin, while others are going full-bore. Altogether, DNR crews will sample 130 lakes across the state this spring; rivers and streams are sampled in the summer, Simonson says.

The spring and summer surveys, along with surveys done in the fall, help give fish biologists information that allows them to estimate the population of certain fish species, understand the distribution of fish size and age, and information about angler harvest.

The crews use different surveys and different sampling gear according to the goal of the survey and the fish species. During the spring, DNR crews use both fyke nets, large hoop nets that act as funnels to trap swimming fish, and electrofishing boats that deliver a low-level electrical current to the water that momentarily stuns the fish but doesn't hurt them. Fisheries crews collect the fish with dip nets and bring them on board

Watch DNR's "Walleye shocking on the Winnebago" video to watch DNR crews use electrosfishing boats on spawning marshes in the Winnebago system.

Once on board, the fish are weighed, measured and often marked with a tag of some kind. DNR crews insert "floy" tags, which look like a thick piece of spaghetti, behind a fish's dorsal fin. Each tag is printed with a unique number, allowing DNR to keep tabs on the fish in coming years when it's recaptured by DNR crews or by anglers. Such information can help DNR generate population estimates, estimate natural mortality rates and harvest rates, and understand where the fish moves and when.

PIT tags, short for Passive Integrated Transponder tags, are sometimes used. They are inserted into the fish and also carry a unique number. These tags are more expensive, but are less likely to come out of the fish and they allow fisheries crews in coming years to run a scanner across a fish to read the number.

Simonson says warm up and earlier spawning season can be a good thing for the fish that hatch. "They get the potential for a longer growing season," he says. "The bigger they are in that first summer the better they survive that first winter."

"The flip side is we can get a cold snap that can be detrimental to the survival of the newly hatched fish," he says. The fast warm up and spawning also may potentially have meant eggs weren't able to fully develop inside the female fish, raising questions about the quality of the spawn.