BEARS WITH CUBS ON PUBLIC PROPERTY NEED UNDERSTANDING AND SPACE, NOT FOOD

EAU CLAIRE - With longer days and warming temperatures, bears are moving around their winter dens and in some cases are easily visible. Sows, in particular, will stay close to their dens to care for cubs.

Wildlife biologists with the state Department of Natural Resources are asking people to give these bears a lot of space. Curiosity is natural, and seeing bears is exciting, but when people gather at these sites, the sows feel threatened, according to John Dunn, a DNR wildlife biologist. 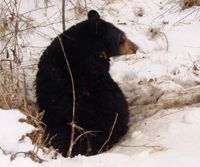 This black bear sow in Eau Claire County is feeling threatened by people getting too close to her cubs.
DNR Photo

DNR conservation wardens report that people have gotten too close to a sow with cubs in Eau Claire County and have also tossed food at bears. The bears do not need human food and this amounts more to harassment than charity, biologists said.

"In this case, you have cubs that are probably two months old," Dunn said. "They are dependent on their mother for warmth and food and nursing. If there is a certain level of harassment, she will abandon them. We are depending on the public to leave the sow alone so she can take care of her cubs."

DNR employees report that a similar situation in Wood County has been troublesome. In that case, with a sow and cubs easily visible in a road culvert, people have thrown food at the bears and the landowner reports seeing spotlights shined into the den at night.

Additionally, while black bears are not generally a threat to people, Dunn said, and will tolerate a fair level of harassment without becoming aggressive, there are limits. When a sow with cubs has a den in a publicly accessible location, public safety becomes an issue.

In the Eau Claire county case, the sow has already exhibited aggressive behavior indicating it is feeling threatened and doesn't have enough space to feel safe with its cubs, Dunn reports. Fortunately, the bear has moved its cubs a short distance onto private property, still visible but less accessible.

DNR employees have increased monitoring efforts, have spoken to neighbors and have sought assistance from local law enforcement.