PARK FALLS, Wis. -- Beginning Friday, Jan. 27, 2012, the gray wolf will no longer be considered a federally endangered species in Wisconsin and other parts of the western Great Lakes region.

In Wisconsin, the state Department of Natural Resources will manage the wolf population outside of tribal reservation lands. DNR officials said areas where wolves have attacked domestic animals will be addressed immediately. 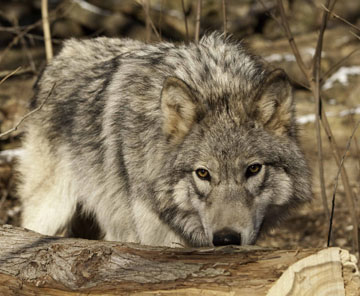 DNR will take over management of the gray wolf in Wisconsin outside of reservations. This photo is of a captive gray wolf at the MacKenzie Environmental Education Center.
Wisconsin Wildlife Federation Photo

"We've been fighting hard to gain this authority, and we are grateful to the U.S. Fish and Wildlife Service for removing gray wolves in the upper Midwest from the lists of endangered and threatened species," said DNR Secretary Cathy Stepp. "We are ready and capable of managing Wisconsin's wolf population at a healthy, sustainable level and we welcome the opportunity to begin addressing those areas where problem wolves are attacking domestic animals."

Wisconsin regulations will treat the gray wolf as a protected wild animal, which means that authorization from the DNR is required before a person can attempt to "take" or kill a wolf. There are currently no plans for a hunting season on wolves. This would involve a change in state law and a public rule-making process.

Landowners or people leasing land will have authority to shoot wolves only when in the act of attacking domestic animals on their land. They also will be able to get permits to shoot any wolf coming on their land if they have experienced wolf problems within the last two years.

Any wolf shot or trapped by a landowner or leaseholder must be reported to the DNR within 24 hours. The carcass must be turned over the DNR.

Conditions under which control permits will be issued include the following five situations:

Under the rule published by USFWS in late December, which takes effect Friday, gray wolves in the Western Great Lakes Distinct Population Segment will no longer be considered either endangered or threatened by the federal government. The segment includes the states of Wisconsin, Michigan and Minnesota and portions of Ohio, Indiana, Illinois, Iowa, South Dakota and North Dakota.

Along with permits to landowner, the services of U.S. Department of Agriculture-Wildlife Service trappers will again be available to trap and remove problem wolves in Wisconsin.

USDA-Wildlife Service, which operates in Wisconsin under a contract with the DNR, will be available to investigate reports of wolf depredations and when wolf depredations are verified would be authorized to capture problem wolves. Because suitable wolf habitat is saturated in Wisconsin, wolves captured at depredation sites will not be relocated but will be euthanized.

With the federal delisting of wolves, states will be required to continue monitoring of the state wolf populations for the next five years. The department currently uses a system of radio-tracking collared wolves, snow track surveys and collection of public wolf observations to track population trends.

The DNR will continue to recruit and train citizen volunteers to assist with wolf management, primarily through tracking surveys.

During the winter of 2010-2011, biologists estimated a population of about 800 wolves in Wisconsin. The results of this winter's surveys will be available in the spring.