MADISON -- Avid musky anglers are increasingly relying on live bait to catch their quarry, according to a recent statewide survey of musky anglers.

About 54 percent of musky club anglers reported some use of live bait in 2010, compared to 38 percent in 1990 and 37 percent in 2000, according to a recent survey of anglers by researchers from the University of Wisconsin-Stevens Point and Department of Natural Resources. 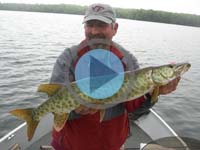 Resident anglers -- those who don't necessarily target musky -- reported lower use of live bait for musky -- 36 percent over the same time period, according to Tim Simonson, a Department of Natural Resources fisheries biologist and co-leader of DNR's musky team.

That widespread use of live bait makes it even more important that musky anglers follow bait rules aimed at preventing the spread of VHS fish disease and that they use quick strike rigs to decrease the number of fish that die due to single hook rigs baited with minnows, Simonson says.

The vast majority -- 98 percent -- of avid musky anglers reported using "quick-strike" rigs, which are designed to reduce hooking mortality, compared to using single-hook rigs, which have been shown to result in greater than 80 percent mortality in hooked muskies, Simonson says.

Starting next year, the use of single-hook rigs (other than non-offset circle hooks) will be prohibited when fishing with live minnows 8 inches and larger, Simonson says. About 68 percent of musky anglers supported this ban on single-hook swallow rigs during voting at the spring fish and wildlife rules hearings, Simonson says.

Musky are one of several dozen Wisconsin native species vulnerable to VHS fish disease, which can cause fish to bleed to death, so it's important to follow state rules to prevent spreading the virus, Simonson says.

Most importantly for musky anglers, buy bait from a Wisconsin bait dealer or registered fish farm. Anglers who have leftover minnows can take them away from a lake or river and use them again on the same water. They may also use them on any other water if no lake or river water, or other fish, were added to the bait container.

The leftover minnows can be taken away at the end of the day in up to 2 gallons of water; otherwise, drain all water from vehicles, trailers, watercraft containers, live wells and fishing equipment.

Find a full listing of rules to prevent the spread of VHS fish disease in a "Fishing with Bait (pdf)" factsheet.