MORE THAN HALF OF WISCONSIN ANGLERS CAUGHT A MUSKY IN 2010

MADISON -- The elusive musky is getting less so: 56 percent of Wisconsin anglers, 48 percent of nonresident anglers, and 83 percent of musky club members reported landing muskellunge in Wisconsin in 2010, according to a recent statewide survey of musky anglers. 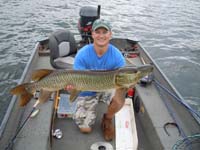 "Anglers might not realize it, but musky fishing is better than it's ever been in terms of the number of fish and availability," says Dan Isermann, a University of Wisconsin-Stevens Point assistant professor and the principal investigator in the survey. "Musky are more abundant than they ever have been because of better fisheries management and the prevalence of catch and release."

Isermann says that improved technology also likely plays a role in the large proportion of anglers who report having caught a musky, once known as the fish of 10,000 casts but now caught in closer to 3,000 casts.

Forty percent of the resident and nonresident anglers, and 77 percent of the musky club members, caught at least one musky over 32 inches, while the average size of the largest fish anglers reported catching in Wisconsin was 46 inches.

Isermann, working with UWSP colleague Kristin Floress and Tim Simonson, a Department of Natural Resources fisheries biologist who leads DNR's musky team, mailed information to randomly selected resident anglers, randomly selected nonresident anglers and musky club members, asking them to take an online survey about how often they fished, generally where, what they caught and what they kept. They also asked anglers questions about their attitudes and opinions regarding muskellunge fishing and management in Wisconsin.

The survey, funded by a grant from the Hugh Becker Foundation and administered by Muskies, Inc., contains many of the same questions asked in similar surveys in 1990 and 2000. The researchers have not yet fully compared 2010 data to results from those earlier surveys, but find results from this snapshot in time that are interesting, and will help manage musky now and in the future, Isermann says.

"To me, some of the more interesting findings spoke to harvest management and whether we could use mandatory reporting," Isermann says. "We're pretty certain musky mortality is low, but we don't have any idea how low is low. How many fish die every year?" Registration of harvested musky would be very useful tool to Wisconsin's management program.

Isermann said he was surprised that support for such a harvest reporting requirement was not higher than 75 percent, given the popularity of catch and release for this species. .

He also found it interesting that avid musky anglers are redefining upward what it means to catch a trophy musky.

"It is amazing to me how many people were choosing lengths greater than 50 inches because those fish are now available to them -- 51 or 52 is the new 50," he says.

Most anglers stayed home to fish for the state species: 32 percent of licensed Wisconsin anglers fished specifically for muskies in Wisconsin during 2010 and 6 percent fished for muskies outside Wisconsin.

Avid musky anglers were more willing to travel: 52 percent of club members spent some time -- generally less than 10 days a year -- fishing for muskies outside of Wisconsin, figures very similar to responses from 1989, with Ontario and Minnesota the top two destinations, Simonson says.