HOT WEATHER HAS SPURRED BLUE-GREEN ALGAE BLOOMS IN SOME WATERS

MADISON -- The recent hot, humid weather in much of Wisconsin is fueling blue-green algae blooms in some popular waters, resulting in growing reports of health concerns related to toxins that can be produced by the algae and warnings from state and local public health and water quality officials.

They advise people to avoid swimming, wading, skiing or coming into contact with the water in areas of lakes and ponds where a green to bluish-green scum or mat of algae is present. They want people to make sure children and pets do not swim in or drink the water.

People are also encouraged to report potential algae-related illnesses to DHS by filling out an electronic form [www.dhs.wisconsin.gov/eh/bluegreenalgae/] (exit DNR) or calling (608) 266-1120.

Mark Werner, a toxicologist with the Department of Health Services says the agency has been "very busy in the last two weeks. We're getting inquiries from Tainter/Menomin lakes in Dunn County, Petenwell Flowage and Castlerock Flowage, Lake Winnebago, and a few others." 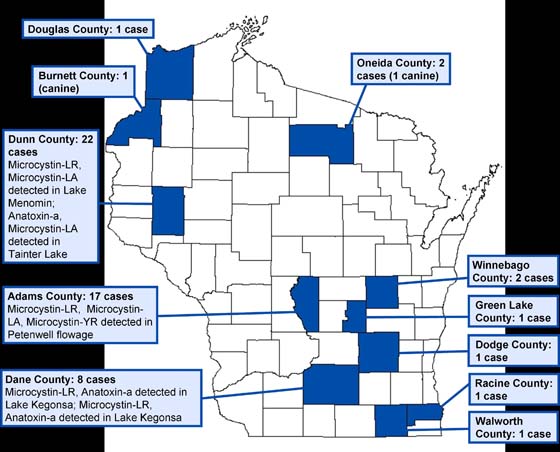 This map shows the potential algae-realted illnesses citizens reported to the Wisconsin Department of Health Services in 2009 and 2010.

Callers are reporting rashes, others gastrointestinal ailments, respiratory irritation, and "we've had one call from somebody who lives on Tainter or Menomin who reported feeling sick from the odor," Werner says. "That was a problem in 2009 from the ammonia from the decomposing algae, and it seems to be popping up again."

On July 28, public health officials in Winnebago, Calumet, and Fond du Lac counties and Department of Natural Resources water quality officials alerted beach goers and others to be cautious on Lake Winnebago (pdf; exit DNR) where blooms are occurring, and which historically has had blooms.

Earlier in July, renowned University of Wisconsin-Madison limnologist Steven Carpenter predicted that the Madison lakes would have a "bad" problem with blue green algae this summer because populations of a water flea that in the past has helped keep blue-green algae levels in check has been decreased by the invasive spiny water flea.

Blue-green algae, technically known as Cyanobacteria, are microscopic organisms that are naturally present in Wisconsin lakes, streams and ponds at low levels. When conditions are favorable, usually in summer, the number of algae can increase dramatically, forming pea-soup blooms and scums on the water surface. Some algal species produce toxins that, when ingested, can harm the neurological systems or liver of people, pets, livestock and wildlife, according to Gina Laliberte, a DNR scientist.

Not all Cyanobacteria produce toxins, but the presence of blue-green algae in a lake or pond is a marker for a potential hazard, she says.

Heavy rains earlier this season may have contributed to algal blooms by providing a surplus of nutrients, although these blooms are common in the summer months when plenty of sunlight is available and water temperatures are warm.