MADISON - It's official: Maxfield JonasKrueger of Madison is Wisconsin's latest and youngest current state record holder for a fish caught with a hook and line. 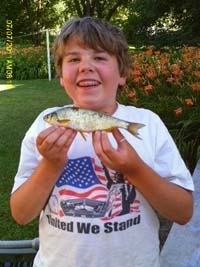 There have been younger state record fish holders -- Troy Schmeling, of Rubicon was 12 years and 3 days when he caught a state record white crappie in December 1995 -- but that record has since been broken several times.

Anglers who think they or someone they know has caught a fish that might be a state record, there are a number of steps to take: