SUPERIOR --The four tiny black fish are humble looking -- seemingly all eyes-- but they hold the key to returning an ancient, human-sized fish to an ancestral water. 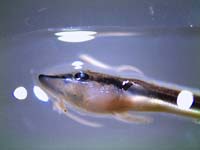 After a generation of stocking, natural reproduction of sturgeon has been documented in the St. Louis River.
Brian Borkholder Photo

"This is a monumental first step," says Peter Stevens, DNR's new fish supervisor in Bayfield. "Rehabilitating a sturgeon population is a long-term commitment. So many people worked so hard a long time to get us to this day, and there are many more years ahead before we know if these young sturgeon can survive, reproduce, and help build a self-sustaining population."

The sturgeon found this year are the progeny of hatchery-raised fish. Most females don't spawn until they are in the mid-20s, so even though there have been large numbers of sturgeon in the river and harbor for many years and the agencies have been looking for offspring of those fish, none had been documented until just last month.

The young fish were found by biologists with the Fond du Lac Band of Lake Superior Chippewa while they were conducting sampling that looks for tiny, larval fish.

Lake sturgeon originally inhabited the St. Louis River in western Lake Superior, but the population disappeared, along with other species, during the early 1900s due to overharvest, water pollution and habitat changes, according to Steve Schram, a retired DNR fisheries supervisor who initiated Wisconsin's sturgeon restoration activities on the St. Louis River while a fish biologist managing that resource.

After Clean Water Act regulations started in the 1970s and significantly improved water quality, the Wisconsin and Minnesota DNRs started a stocking program in 1983 to re-establish a spawning sturgeon population on the river, which forms the border between the two states, says Schram, who played an instrumental role in starting the sturgeon restoration program.

From 1983 through 2000, some 762,000 fry, 143,000 fingerlings and 500 yearling lake sturgeon were released into the St. Louis River. And the two agencies have monitored populations of stocked fish through capture and tagging studies, and routine fish surveys on the river and Lake Superior. The fish were of Winnebago system strain and were raised at Wild Rose Fish Hatchery.l

Bill Blust, DNR fisheries technician, says that DNR has been monitoring adult abundance below the Fond du Lac dam on the St Louis River during spawning time since the early 2000s. They have documented an increase in spawning numbers, and there are good numbers of fish.

"Males showed up first because they mature earlier in life, and we have sampled more females the past few years," Blust says. "We knew it would only be a matter of time before we would see natural reproduction. We finally had enough females present and conditions right to bring off a successful year class of large enough size for us to detect."

Both Wisconsin and Minnesota will continue monitoring in the river and Lake Superior to follow abundance of naturally produced fish, Blust says.

"The current no kill regulation on the St Louis will remain in effect hopefully until we document successful reproduction by parents produced naturally," he says. At that time, which could be 20 years down the road, we can declare the population as self sustaining and probably open up harvest which will be very conservative I assume. Most of our sampling will be done by the crew in Bayfield on the Hack Noyes research vessel."

Gillnet sampling of the Chequamegon Bay sturgeon population this spring found anecdotally, that the population appears healthy and the results seem consistent with previous years. The largest fish DNR captured was about 59 inches. All fish are weighed and measured, a tissue sample is taken, and they are tagged with both an external floy-tag and internal PIT tag, which allows fish movement to be tracked. We often see other agency tags in our sampled fish as well.

"This successful fishery story is one of many we've witnessed on the lower St Louis River, which was pretty much decimated in the mid 1970s," Blust says. "Through protective regulations and reintroduction stocking programs the river is home to some of the best musky, walleye, bass fishing in the country."