MADISON -- October may just be the best time to catch ol' marble eyes: catch rates are higher than at any time during the summer, the water's less crowded, the heat and bugs are tapering off, and the fall colors make every trip satisfying for the soul if not the stomach.

"People are putting away the rods and turning more toward the bow and shotgun, but the hardcore anglers are actually doing pretty well right now," says Mike Vogelsang, Department of Natural Resources fisheries supervisor based in Woodruff.

"About the time the leaves start falling on the water, that's when the action heats up. It is absolutely worth it for more casual anglers to get out on the water if they want to catch walleye."

Vogelsang supervises fish biologists in what's one of Wisconsin's top walleye regions: the area including Vilas and Oneida counties, which between them boast more than 2,000 lakes, and Langlade, Lincoln, Forest and Florence counties, which have fewer lakes and crowds but feature the same kind of prime walleye waters.

"This time of year is very much like the opening weeks of the inland fishing season," Vogelsang says. "It seems like the later it gets here the better it gets."

Walleye move into deep water in the summer in search of cooler water temperatures. In fall, they move up into shallow water, he says.

"This time of the year, that cooler water is up near shore," he says. "Walleye are sensing that winter is coming and they are feeding heavily on the forage fish, which are up shallow too. It's almost like they are putting on the feed bag."

Walleye actively feed through the winter, unlike bass, which tend to shut down. With this shore lunch favorite in close to shore, anglers stand a better chance of reeling them in, according to Tom Cichosz, a DNR fisheries biologist and treaty fisheries analyst.

UW-Stevens Point and DNR fisheries biologists analyzed angler surveys from 1991 to 2002 in northern Wisconsin to assess fishing pressure, catch rates and harvest rates. They found that catch rates in October were more than twice as high as in July, when most people were out fishing for walleye. Their results are presented in "Temporal Profiles of Walleye Angling Effort, Harvest Rate, and Harvest in Northern Wisconsin Lakes" (exit DNR) in the North American Journal of Fisheries Management.

"Walleye catch rates in October are higher than any time during the summer months," Cichosz says. "The fish go where the conditions are suitable for them to be, and in cooler conditions, that includes shallower water where they are more easily located and angled."

DNR fish biologists and technicians are busy conducting fall surveys, using electroshocking boats to help them capture fish to weigh and measure before returning the fish to the water. Below are fishing reports from those biologists able to respond on short notice. More information about fish populations are found in the Wisconsin Fishing Report 2010./ Look for the county listing for the water you want to fish.

The Red Cedar Chain of Lakes located in northeastern Barron County is the top local walleye water. A good number of 14-18 inch fish are present at this time and many of those fish will be near the 18-inch minimum length limit this coming fall and winter and should be available for anglers to harvest. Walleye fishing on the Chetek Chain of Lakes in southeastern Barron County should be slightly above average when compared to past years. The local resort owners association along with Walleye's for Chetek have been stocking large fingerling walleye the past several years. Some of those fish should now be over the legal length limit of 15 inches this fall and available for anglers to harvest. - Heath Benike, fisheries biologist, Barron

The fall bite provides some of the fastest action of the year in terms of walleye caught per hour but few people are out there. Lake cabin owners are back in the cities and local sportsmen are mostly out hunting. Long and Shell Lakes and Minong Flowage in Washburn County and Yellow Lake in Burnett County are top fall choices. Jig and a minnow or trolling crank baits can be effective in fall. - Larry Damman, fisheries biologist, Spooner

Water temperatures cooled rapidly this fall despite an exceptionally warm summer. After fall turnover, walleye transition to the deeper waters of lakes, often concentrating around underwater points and the steeper contour breaks. River walleye make an upstream migration and concentrate in the deepest pools and near underwater structure. Cooler temperatures means a slower metabolism for the fish. They are feeding heavily to put on weight for the winter, but they do not like to chase baits. Most fall walleye anglers fish slowly and tip up-sized baits like 4-6 inch chubs or suckers are often preferred by the fish. Fall electrofishing surveys have been showing a moderate to strong year-class of yellow perch on many Oneida County lakes. Perch are an important food source for adult walleye, along with bluntnose minnow, rosyface shiner and even smaller walleye. The highest walleye populations and best action are found on lakes regulated under no minimum length limit but only one fish over 14 inches allowed. The reservoirs generally hold the best numbers of fish in the mid 'teens while fewer but larger fish are often found in the large, deep lakes. Netting and electrofishing survey results can be found on the Fish and Habitat Survey Reports and spring surveys pages of the DNR website - John Kubisiak, fisheries biologist, Rhinelander

Surface water temps are in the mid 50s and most waters have turned over. October is the second best (May is #1) time to catch good numbers of walleye. Fish steep rocky drop-offs with light jigs and minnows. This bite will continue until the lakes freeze up in November or your hands get too numb to turn the reel handle and you grow tired of chipping ice off your guides. I would write more but got to go shocking.- Steve Gilbert, fisheries biologist, VWoodruff

It should be a very good fall for anglers chasing walleyes on Green Bay and its tributary rivers. There has been excellent recruitment of walleyes in the past seven years with only the 2005 year class as a bust. Meaning there are a lot of walleyes and a lot of different sizes of walleyes out there. Particularly strong is the 2003 year class; these walleye average around 23 inches. This was the most common size of fish harvested in 2009 and continues to support a fantastic fishery. However, 2008 and 2009 were also very strong year classes when sampled last fall during our annual electrofishing survey. Those 2008 fish will be at the end of their third summer of growth and just short of, or becoming 15 inches this fall. The walleyes have had plenty to eat this summer, thanks to very abundant gizzard shad and a huge year class of yellow perch. Soon the walleyes will begin to concentrate in the rivers as they prepare for next year's spawning run, and they are in excellent condition. And as always on Green Bay, that next fish could be that 10 pounder! - David Rowe, fisheries biologist, Green Bay

Lower Menominee River and Green Bay waters from the Menominee to the Fox rivers will continue to produce nice size walleye, 20 inches and greater. Traditionally, anglers troll with night crawler harnesses and/ or crank baits but jigging with a minnow is also effective. Musky anglers have several good opportunities in Oconto and Marinette counties for legal size fish including: White Potato Lake, Lake Noquebay, High Falls, Caldron Falls, and Chalk Hill flowages. I would suggest fishing in low light conditions and overcast days. Fish should be in shallower water during the fall. - Michael Donofrio,fisheries supervisor, Peshtigo

Anglers are catching walleye below the Hattie Street Dam in Marinette. The increased flows as a result of last week's rainfall have attracted fish in from the bay. Anglers are fishing from the Fisherman's Walkway on the bridge. Anglers have also been catching a few fish below the Grand Rapids Dam on the Menominee River from both the Wisconsin and Michigan shores. Fish are being taken on a variety of crankbaits and live bait The water is still high and fast, but falling steadily. Those interested on water levels in this area should refer to the U.S.G.S. gauge at McCallister (exit DNR) - P. Chip Long, inland fisheries biologist, Peshtigo 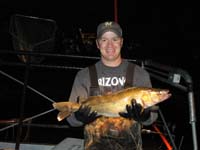 There are some nice walleye in on some of the shorelines on the Winnebago system right now. We got more than 300 in a 4.5 mile section of shoreline Wednesday night! If you find turbid water there are likely young-of-year gizzard shad in there and the walleye must be in there feeding on the shad. Water temperatures were in the 61 - 63 degree range. Don't know how long they will be there but there were some nice fish along the shoreline at night.- Kendall Kamke, fisheries biologist, Oshkosh

- As the water cools the fish will be heading to the shallows to feed and bulk up for winter. Head out to rocky shore lines and points to find fish. All the lakes will be picking up in the next couple of weeks. Keep moving until fish are found, our surveys last week showed that they are starting to show up. - Scott Harpold, fisheries technician, Fitchburg

Now's the time for fishing trophy walleyes on our larger lakes. Good lakes to consider are Pewaukee, Wind, Geneva, Delavan, Pine, Oconomowoc, Pike and Big Cedar. This is the time of year we see some truly large walleyes taken by trolling at night. Try fishing 12-16 feet down along rocky drop-offs. On lakes with ciscoes, try large Rapalla-type plugs trolled far behind your boat. Make sure to keep your running lights on while your motor is running and be sure to take a good flashlight along. - Randy Schumacher, regional fish supervisor, Milwaukee

Recent surveys of southeast Wisconsin lakes have shown that walleye populations are doing great. Some of the best bets for a bite include Pine Lake, Nagawicka Lake, Oconomowoc Lake and Lac La Belle in Waukesha County; Pike Lake and Big Cedar Lake in Washington County; Delavan Lake, Geneva Lake and Turtle Lake in Walworth County; Wind Lake in Racine County; and Powers Lake in Kenosha County. All have good public access. As the weather cools, expect these fish to put on the feed bag. Fish the steep dropoffs during the day, trolling parallel to the structure. However, some of the best action comes after dark, when walleyes move into shallow water to feed. Casting along the edges of weedbeds can bring out the big ones.- Sue Beyler, inland fisheries supervisor, Waukesha

Fall walleye action has been excellent in western Wisconsin. Large walleye are being taken on deep diving crank baits along the break line (9-14 feet) or off the tip of gravel bars. Smaller walleye are also being taken by jigging the weed line. - Marty Engel, fisheries biologist, Baldwin

High flows are currently hampering walleye fishing on the Mississippi River. Current water levels are seven to ten feet high below the dams, and only a slow recession is predicted during the next seven days. As water recedes over the next few weeks, fishing conditions will improve.- Brian Brecka, fisheries biologist, Alma