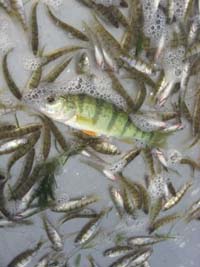 "Once again we're seeing a very strong year-class," says Tammie Paoli, Department of Natural Resources fisheries biologist in Peshtigo. "Numbers are up and the fish are larger than last year at this time, which is indicative of the early hatch and warm water temperatures encountered this spring and summer." Earlier this month, young-of-year perch were 2.5 to 3 inches long.

Paoli is hopeful that this year class of fish will be different than other classes in recent years that have survived their first summer in good numbers but many of which have died before reaching a catchable size.

"We've been getting some pretty decent year classes for quite a while now, but we are not seeing adults in the numbers we'd like to. There seems to be a lot of mortality occurring at some point in their first one to two years."

While Paoli and other DNR biologists don't know the exact reasons for the perch mortality, they do have some suspects: predation from other fish species, such as walleye and/or northern pike, which both seem to be doing well in the bay; or bird predation, specifically cormorants, which are at high numbers and are the subject of control efforts by the DNR and Wildlife Services of the U.S. Department of Agriculture. The two agencies have been oiling cormorant eggs and conducting some limited sharp shooting to trim back the birds' numbers, as described in this February 2008 Wisconsin Natural Resources magazine article, Cormorant Conundrum. 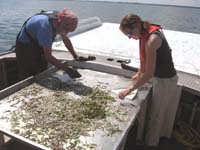 Fishing reports for most of the summer have reflected the fishery's skewing toward young, small fish, Paoli says. "We've heard reports of good fishing but a lot of small fish. So again, this kind of goes back to the idea that some of these fish may be cropped off at a younger age."

The yellow perch season on Green Bay runs from May 20 through March 15, and there is a daily bag of 15 with no length limit. Anglers tend to start keeping perch when they are about 8 inches long, a size they tend to reach in their second or third year, she says.

In the last week or so, DNR creel clerks who survey anglers about their catch have reported some improved catches. "So the size of fish people have been catching could be related to water temperature, fish moving around."

The DNR crews were able to complete the surveys this year using trawling nets early despite intense heat, humidity, and fog, Paoli says. The relative abundance combining shallow and deep sites increased from 1,211 per hour spent trawling in 2009 to 2,581 per hour in 2010. The other two years which were higher were 1986, when 4,480 per hour were hauled in, and 2003, with a rate of 7,868 per hour.

The majority of the young perch were captured near the mouth of the Peshtigo and Pensaukee rivers and in the Little Tail Point area.

Other notable items from the survey: