PROLONGED DROUGHT HAVING SEVERE IMPACT ON SOME NORTHERN LAKES, FLOWAGES

SPOONER - Eight straight years of drought in northern Wisconsin is causing many people to ask what is happening to the fish, wildlife and recreation dependent on water.

A 12-month drought cumulative effects scale -- known as the Palmer Drought Index (exit DNR) -- shows below average precipitation again for 2010. The May index has northern Wisconsin in the moderate to severe drought category.

Water levels are down 15 feet on Deep Lake in Washburn County.
WDNR Photo

The water deficit crosses most of the northern part of the state. Department of Natural Resources Fisheries Manager Dennis Scholl said the Rainbow Flowage in Oneida County is down 13 feet while Deep Lake in Washburn County is down 15 feet, one of the worst examples of the lack of precipitation. Most water bodies in the north are affected.

While no one can control the weather, Department of Natural Resources staff say low water cycles are a natural occurrence, and that there are different ways that fish, wildlife and humans adapt to the cycles. Shoreline owners have a key role in protecting fish and wildlife when water levels drop.

DNR Fisheries Biologist Dave Neuswanger says a primary adverse impact of the drought on fish is that clearer, weedier water favors largemouth bass over walleye, which are competitors for food and also prey on each other.

Wisconsin anglers prefer walleye over largemouth bass by an almost 2:1 margin. But during drought conditions, lakes can become clearer, as surrounding wetlands dry up, because wetland filtration tends to leave a dark stain to the water discharged to lakes. These conditions favor largemouth bass over walleye. Walleye do best in shaded low-light conditions and so in clear, shallower lakes walleyes have less habitat with a comfortable light level. This makes walleye less efficient as predators and more vulnerable to predation by largemouth bass, which thrive under clear-water conditions.

Even some former waters renowned for walleye production like the Chippewa Flowage will become largemouth bass lakes if a change is not made in angler harvest patterns in response to the drought and new environmental conditions, Neuswanger added.

As for fishing, fish managers say it does not necessarily become easier to fish as fish are squeezed into less water, because an angler's bait must compete with the prey species, minnows and bug life that also are squeezed into that dwindling waterway. However, in other cases, such as trout streams, low water levels can concentrate fish in deeper pools, which can make them more vulnerable to exploitation. Fish manages look to anglers to exercise restraint in such cases, especially in Class 1 trout streams with naturally reproducing fish populations, where future fishing opportunities could be harmed by overharvest.

The drought is having both positive and negative effects for wildlife according to Mike Zeckmeister, DNR Northern Region wildlife expert.

"Depending on the lake, the amount of vegetation can increases significantly around a lake," Zeckmeister said. "This provides a valuable food source for resident wildlife and migratory birds."

However, other plant production is limited during droughts. This is especially true for plants favored by wildlife such as blackberry, mushrooms and low bush blueberries. Oaks produce fewer acorns or may not produce acorns at all during periods of drought.

Although we may not like them, Zeckmeister said, droughts are a natural, normal and recurring process. Many ecosystems are dependent on this cycle to maintain healthy fish and wildlife populations.

Piping plovers, federally and state listed endangered species, nest along sandy shorelines that are free of vegetation. They were documented nesting on Lake Superior gravel beaches in the mid 1970s through early 1980s, but then breeding pairs of these rare birds disappeared from the western shore of Lake Superior. Now in the last few years, there have been a few nesting pairs in Wisconsin, in part due to lower water levels along Lake Superior.

Other shoreland birds are finding more nesting habitat as shorelines increase. Any vehicles or equipment should be kept off these newly dry areas during low water levels to prevent destroying nests of birds that lay their eggs. The eggs and nest, by nature, are made to blend in with the rocks and shoreline debris and are hard to see.

As the drought continues, homeowners should use native plants or plants that do not need watering for landscaping. Motor vehicles should keep off shorelines to protect nesting birds and newly emerging plants. 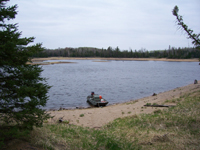 Boating is becoming challenging on waters like the Willow Flowage because of low water levels.
WDNR Photo

Most stream levels are down to about 30 per cent of their normal flow and many lakes have dropped from 3 to 15 feet depending on water source. Some human-made flowages, like the Willow and Rainbow reservoirs, are down to their original stream channels.

Canoeists and kayakers will find some streams much more difficult to navigate. Some stream stretches are so low that travelers are forced to get out and drag their canoes over the shallows. Recreational safety specialists recommend canoeists and kayakers go light with gear and plan on getting feet wet. Bring an extra paddle if one gets ruined on the rocks.

Motorboat users must take extra caution with low water levels. More than a few propellers and lower units have been ruined by boaters running at high speeds through what was once a safe travel area. If unfamiliar with the waterway, check locally with a resort or bait shop on where the shallow water areas, rocky shoals, stump fields or other submerged obstacles are. Boaters should carry an extra propeller. Check a lake map for water depths or use a depth finder, and take it slow.

Operation of all terrain vehicles (ATVs) is prohibited on the on the exposed bed of any navigable water, including exposed lakebeds in front of private property, with only a few exceptions, such as to launch a watercraft or to reach the frozen surface of a lake.

"Shorelines play a vital role in providing habitat for fish and wildlife," said Daniel Houston, DNR water regulation and zoning specialist. With the continued drought and dropping water levels, DNR staff has been getting many questions about what citizens can and cannot do to clean up shorelines.

"Shoreline property owners get to enjoy the use of these exposed areas but also have the responsibility of ensuring their activities do not impact the lakes and rivers that belong to everyone. Most of the exposed areas are below what is called the 'ordinary high water mark,' which is the dividing line between private property and the publicly owned lakebed," Houston said.

Most activities conducted on the exposed lake bed including beach grooming and cutting or chemically treating vegetation are regulated by the DNR, and most require a permit.

Shoreland property owners should learn what plants are growing on lake beds, and determine whether they are native plants, whether they provide wildlife habitat or food, or are possibly invasive plants, and then contact a DNR aquatic plant coordinator (look under waterfront permit contacts) to get advice on plant control.

If the plants are native vegetation -- except for wild rice -- some minor vegetation management activities may be done by hand without a permit from the DNR. Shoreland owners may manually cut and rake aquatic plants within an area no more than 30 feet from any piers, boatlifts, swim rafts and other recreational and water use devices.

Non-native and invasive species may be removed by hand in an unlimited area without a permit: They include phragmites (see also phragmites fact sheet [PDF, 66Kb]), Eurasian water milfoil, curly leaf pondweed, and purple loosestrife. All plant fragments must be disposed of outside of a waterway or wetland.

Removing vegetation from an area larger than 30 feet wide, driving a motor vehicle on the lakebed, depositing any materials, tilling, and chemically treating vegetation if the area is wet all require a permit. The law considers roto-tilling the exposed beach a dredging activity that requires a permit. The permits are designed to assure that the activity does not damage the lake or the sensitive exposed habitat.

"If you have plans for your lakeshore, be sure to find out if permits are required. It's good for your lake, and the penalties for not getting one can be steep -- up to $186 for driving on an exposed lakebed and $1,318 for illegal dredging, which includes activities such as tilling and disking," Houston said.

More information on waterway permits can by found on the DNR website.

Although humans cannot do anything to avoid a drought, people can learn some valuable lessons from dry periods that guide responsible use of water. Whether we have a drought or not everyone should always conserve water and treat the natural resources with respect.