Watch For Salamanders, Snakes, Frogs And Lizards On The Road 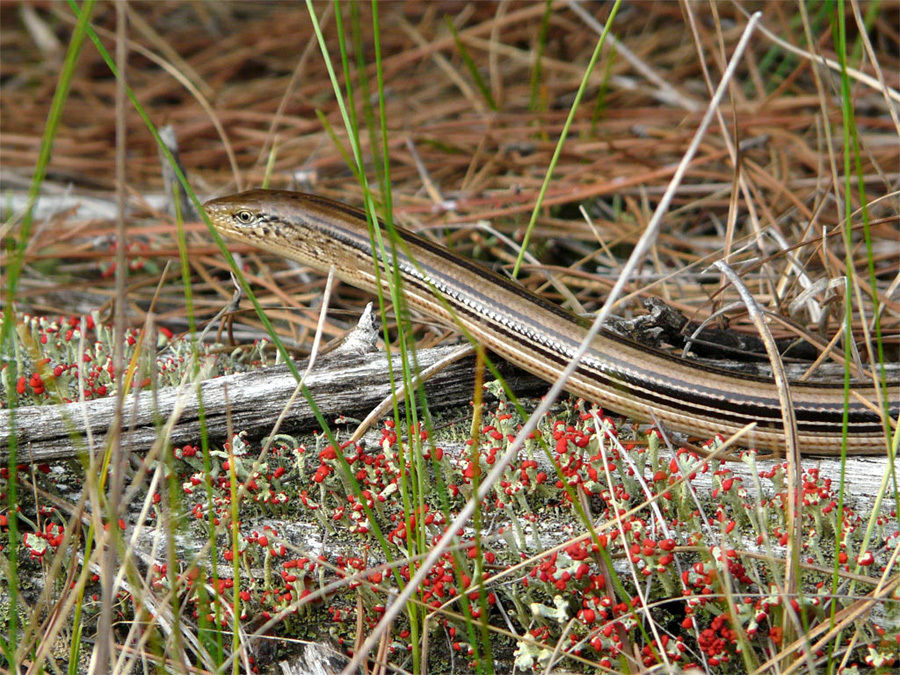 A new roadkill reporting system aims to help herptiles like this endangered slender glass lizard, one of Wisconsin's four lizards and the only legless lizard.Photo credit: Nick Walton

MADISON, Wis. - New efforts are underway to help Wisconsin's "creepy crawlies" - native frogs, salamanders, lizards and snakes - from perishing under the wheels of cars and trucks.

Wisconsin residents and visitors are being asked to report road crossings where these reptiles and amphibians are found dead or alive to help better understand where their populations occur and to save more of them in the future. The new reporting form is now available on the Wisconsin Department of Natural Resources' Reptiles and Amphibians webpage.

"Our goal is to fill in gaps of where these animals are found in Wisconsin and how they're doing in the state so we can better protect them," said Rich Staffen, a DNR Natural Heritage Conservation Program zoologist. "We also want to identify high road mortality areas where we can work to incorporate mitigation efforts to diminish the threats to them."

"Most amphibians and reptiles migrate between different habitats throughout the year, which unfortunately means they must often cross roads," Paloski said. "Road crossings pose challenges for animals, but it is also a time when citizens are most likely to see the animals and can therefore help us gather information."

The roadkill reporting effort for snakes, salamanders, lizards and frogs is modeled after DNR's well-established Wisconsin Turtle Conservation Program, which encourages people to report particularly deadly road crossings for turtles. Since that effort started in 2012, people have provided nearly 3,000 turtle crossing location reports and DNR has identified 47 of those sites as particularly deadly for turtles and worked with partners to reduce mortality rates there.

Putting the brakes on decreasing reptile and amphibian numbers

Many snake populations have declined in Wisconsin due to habitat loss and human persecution; 13 of Wisconsin's 21 snake species are considered "rare" and listed as endangered, threatened or special concern.

Three of Wisconsin's four lizard species are in trouble, including the legless and endangered slender glass lizard.

Wisconsin is home to 12 species of frogs including the American toad. A few species have relatively stable populations but many have declined throughout the state due to habitat destruction and fragmentation.

Wisconsin has seven different species of salamanders, one considered "special concern" because of uncertain population numbers. These secretive animals are often undetected by humans but live most of their lives on land, returning to aquatic habitats only for breeding.

Learn more about all of Wisconsin's herptiles.

To help launch this roadkill reporting system, our conservation biologists pulled together a "Herp Quiz" to raise awareness and identification of Wisconsin's many amphibian and reptile species, collectively known as herptiles. At the end, quiz takers can choose to enter a giveaway for herptile guidebooks.

The drawing for the DNR guidebooks will be random and not tied to the number of questions entrants answer correctly. Learn more about the giveaway rules and an alternate method of entering to win.
Last Revised: Monday, August 10, 2020