Lower Menominee River Area of Concern on Path to Delisting 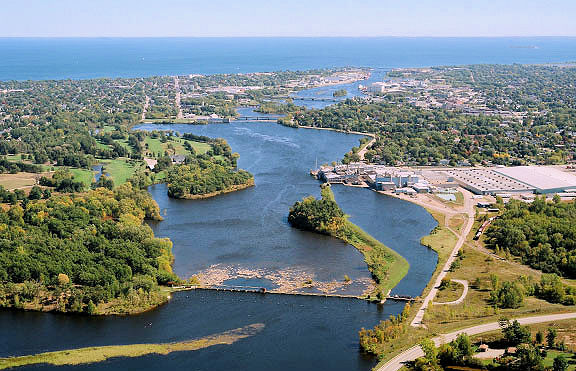 Editor's Note: Watch how the Wisconsin DNR partnered with local organizations to turn this Area of Concern into a regional attraction here.  Please contact the Office of Communications for video footage.

MADISON, Wis. - After 30 years of pollution cleanup and restoration efforts, the Wisconsin Department of Natural Resources and Michigan Department of Environment, Great Lakes and Energy (EGLE) are proposing to remove the Lower Menominee River Area of Concern from a list of the 43 most polluted places on the Great Lakes.

Both Wisconsin and Michigan provided the U.S. Environmental Protection Agency's Great Lakes National Program Office with a preliminary report that summarizes the reasons for delisting. The U.S. EPA has taken the next step by seeking input on the proposed delisting from tribal representatives and the International Joint Commission. An additional public review opportunity will follow this step in the delisting process and is anticipated to occur in the next few months.

"This is a very significant improvement in the water quality for Green Bay, which, like every part of the state deserves safe, clean water. We will continue to work in this part of the state to ensure that Wisconsinites have access to clean drinking water coming from their taps and that businesses can thrive in areas not endangered by toxic sediment," said DNR Secretary-designee Preston D. Cole. "I am happy to report that the DNR continues to strive for safe, clean water for every part of the state for both our public health and economic future."

The international Great Lakes Water Quality Agreement between the U.S. and Canada, signed in 1987, designated the Great Lakes rivers and harbors most severely affected by pollution and habitat loss as "Areas of Concern" or AOCs.

Michigan's Upper Peninsula and northeastern Wisconsin meet at the Menominee River, which flows into Lake Michigan's Green Bay. Environmental harm from historical pollution from coal tar, paint sludge, and arsenic earned the lower three miles of the river and the Green Bay shoreline - three miles north and south of the river mouth - an AOC designation.

The Lower Menominee River was listed as having six problems, called "Beneficial Use Impairments" in the AOC Program. All six of these impairments have been addressed, so now the agencies are proposing to "delist" or remove the Lower Menominee River from the international list of Great Lakes AOCs. This will be Wisconsin's first of five AOCs to be delisted.

The delisting proposal is made by the Wisconsin DNR Office of Great Waters, Michigan EGLE and supported by the Lower Menominee River AOC Technical and Citizens Advisory Committees. All delisting review steps are expected to be completed in 2020. A public meeting is planned for April 2020 to give people more information about the delisting process, opportunities to ask questions and provide feedback.

Sources of pollutants were controlled by improving industry practices and removing contaminated sediments within the boundaries of the AOC. Cleanup efforts took place at the Lloyd Flanders paint sludge site from 1993 through 1998, where 30 million pounds of hazardous waste and contaminated sediment were removed from Green Bay. Major cleanup in the Lower Menominee River included removing 302,000 cubic yards of arsenic-impacted sediments at the Ansul/Tyco site, plus removing 15,000 cubic yards of coal tar wastes at the Wisconsin Public Service Corporation site between 2012 and 2015. The final AOC cleanup step was removing 59,000 cubic yards of contaminated and excess sediment from Menekaunee Harbor from 2014 through 2015.

In addition to pollution cleanup, many habitat restoration projects were also completed in the AOC. For example, fish passage was restored over the Park Mill and Menominee dams in 2016, returning an 18-mile stretch of prime spawning habitat for lake sturgeon. More than 133 acres of shorelands, wetlands and uplands were restored at Menekaunee Harbor and the South Channel, providing vital habitat for fish, birds and other wildlife.

Menekaunee Harbor is now cleaner, deeper and better able to accommodate recreational and commercial fishing boats. As a result of this cleanup effort, the harbor was chosen as one of the sites for Cabela's 2017 and 2019 National Walleye Tours - events that contribute to the revitalized economic prosperity of the area.

"Partnerships are essential for achieving AOC restoration goals," said DNR Office of Great Waters Director Stephen Galarneau. "This has been a team effort by many state and federal agencies, municipal governments, nonprofit organizations, technical consultants and committed citizens to restore these areas."

Significant funding for the pollution cleanup and restoration work was provided by the federal Great Lakes Restoration Initiative administered by the U.S. EPA. Wisconsin and Michigan share responsibility for the river's rehabilitation, and the states have worked closely with each other and with local citizens to address the pollution and habitat loss. Many local and federal agencies have been important partners as well.

"The AOC pollution cleanup and restoration are significant accomplishments by people who have worked for decades to reconnect with their river and Great Lakes harbor to create a brighter economic, ecological and recreational future," Galarneau said.