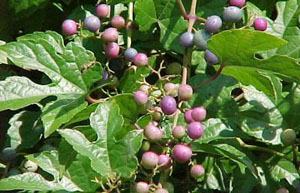 This is the largest known population of this aggressive plant in Wisconsin, and Department of Natural Resources invasive species officials are asking area homeowners to help eradicate the species before it spreads further and blankets yards, parks, and forests.

The vine has been found on hundreds of properties within the two neighborhoods so far. DNR staff have contacted homeowners in these neighborhoods asking them to look for, report the vine, and try to control it if possible or allow DNR-paid contractors on site between now and March 1, 2019 to control it.

"Fortunately, porcelain berry is not yet widespread in Wisconsin or even within Madison and we want to keep it that way," says Jason Granberg, DNR invasive species specialist. "This vine is a significant threat to trees and other plants in yards, parks, and Wisconsin forests, and we need help from homeowners in these neighborhoods to prevent the infestation from getting larger or escaping into other communities."

Porcelain berry (Ampelopsis brevipedunculata) is an ornamental plant from east Asia that is listed as a prohibited species under state law, NR 40. The prohibited status means it is found in only a few places in the state but spreads aggressively and can potentially cause significant environmental or economic harm. It is illegal to buy, possess, transport, transfer or introduce species listed as prohibited in Wisconsin.

Until 2009, no state or federal regulations limited the sale and planting of porcelain berry. One or more residents in the area probably planted it several years ago and birds have since helped spread the seed around, greatly expanding the population, Granberg says.

Homeowners in the Crestwood neighborhood and parts of the Spring Harbor neighborhood were mailed materials this week to help them identify the plant on their property and permission forms to allow the contractors on site. The control project is funded by limited federal funding DNR received earlier this month.

The herbicide is specifically formulated to kill broadleaf trees, shrubs, and vines and does not pose a health risk to people, pets, mammals or bees and other pollinators, Granberg says. By applying it only on the cut stem or as a basal bark treatment, the treatment is very targeted and prevents the plant from re-sprouting in the following year, he says.

The City of Madison has been working to control porcelain berry at Owen and Kettle Pond Park on Old Middleton Road. DNR's outreach and control project in the Crestwood and Spring Harbor neighborhoods expands on these efforts and aims to reduce the porcelain berry population and decrease its likelihood of spread to additional areas.

Porcelain berry looks very similar to native and cultivated grape vine, and in the winter, looks similar to the native Virginia creeper (Parthenocissus quinquefolia). For a helpful factsheet showing porcelain berry and lookalikes, as well as other materials, search the DNR website, dnr.wi.gov, for "porcelain berry."

If you believe you live in the affected neighborhoods or surrounding area and you have porcelain berry vines on your property, DNR staff ask you to:

"Since this plant is invading greenspaces and backyards, homeowners will play a critical role in eradicating this invasive plant," Granberg says. "Getting rid of it in the early stages of invasion will help protect the environment and wildlife habitat, reduce costs, and increase the chance of long-term success."