The man who has led Wisconsin's fisheries management program for the past 17 years has announced his retirement this spring, capping 32 years of public service devoted to expanding and improving fishing opportunities in Wisconsin.

Fisheries Director Mike Staggs has announced that he will be retiring as soon as the Department of Natural Resources is able to hire his successor.

"We've tried to make fishing better for all users out there and I think we've done that in many ways," Staggs says. "That sounds cliche and I hope it doesn't trivialize what we've done together with partners, but it's true." 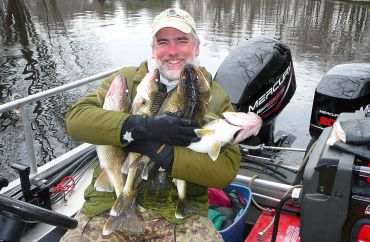 Mike Staggs will be retiring this spring after 17 years as Wisconsin's fisheries director.
WDNR Photo

Staggs says he had been thinking about retiring at some point in the near future, and decided that the time was right. "We are getting ready to start work-planning for the 2015-17 biennium, and we'll be making a number of key supervisor hires over the next year," he says. "Now is a good time so that the new bureau director can guide those important decisions."

DNR Secretary Cathy Stepp has known Mike Staggs since her days on the Natural Resources Board in the late 1990s. "I've always been impressed by the importance he placed on communicating and partnering with anglers and his commitment to the resource. I appreciate his leadership in the department and want to congratulate him on finally getting some time to do some fishing himself!"

Staggs joined DNR in 1982 as a fish and wildlife research statistician, became a fisheries management staff specialist in 1986, and served as chief of fisheries research from 1992 until becoming Wisconsin's fisheries director on March 16, 1997.

"During my 30-year career with the department, there have been lots of interesting and significant changes in the fisheries, many of which DNR had a hand in bringing about," Staggs says.

Wisconsin has long ranked among the top states in licensed anglers overall and in the number of non-resident anglers. While many other states have seen their number of anglers decrease, Wisconsin's numbers have been stable and fishing continues to be a part of the state's cultural fabric. Every year, about 1.4 million people buy licenses, and more than 40 percent of adults 16 and older say they fish, although not every year. Fishing generates an economic impact of $2.3 billion, employs 22,000 and provides nearly $150 million in revenues for state and local government.

Anglers on Lake Michigan have enjoyed phenomenal fishing for chinook; anglers on Green Bay now enjoy a fishery for spotted musky thanks to a DNR partnership with musky clubs to stock the fish; and sturgeon populations in the Lake Winnebago system reign as the world's largest, with 29,000 adult male sturgeon and 18,500 adult females, with work underway statewide to restore sturgeon to more of its historic range. Lake Superior's native lake trout have come back to provide a solid fishery and both Great Lakes have emerged as outstanding smallmouth bass fisheries as well.

Through habitat restoration and improved farming practices, trout populations are at some of the highest levels in 50 years and protective regulations, stocking and habitat protection have contributed to strong musky size and numbers.

Other key accomplishments during his tenure include developing a systematic monitoring system for fish populations in lakes and rivers to inform regulations and other fish management activities; rebuilding the programs aging Great Lakes research vessel fleet; and greatly expanding outreach to anglers using the Web and social networking particularly to target recruitment and retention of anglers from non-traditional demographic groups. As a research scientist he played a key role in the court proceedings and development of the management system for regulating the harvest of walleyes and muskies by both tribal spearfisherers and anglers in northern Wisconsin's Ceded Territory.

"Fisheries management is a complex blend of science and sociology," says Steve Avelallemant, northern district fisheries supervisor, who has worked with Staggs for most of his career. "Mike has always insisted on using the best science possible to frame decision-making while negotiating the changing and often differing desires of those who use the resource. Decisions were not always popular but Mike usually had it right."

Scot Stewart, longtime fisheries supervisor in southern Wisconsin, says that Staggs "always looked out for all segments of the angling public and challenged us when he thought we may have overlooked one of those groups. And no one worked harder than Mike for the people of Wisconsin. Many times we received emails from him at ridiculous times at night."

Al Kaas, DNR's fish propagation chief, says that in the 14-plus years he's worked directly for Staggs, "he has pushed me and the propagation system to be their best, insuring the best value for our sportsman from the fish stocking program. Mike's willingness to become involved in critical issues has resulted in better outcomes for the sportsmen and women we serve."

Staggs stresses that these accomplishments were team efforts. "It has been a tremendous privilege to work in this program during my career. Wisconsin anglers are very lucky to have such a hard-working, dedicated, and professional group of DNR fisheries staff. They are second to none anywhere in the country."