Despite recent warm temperatures, snowmobile trails remain open in about a dozen northern counties but have begun to deteriorate with warmer temperatures, according to the travelwisconsin.com Snow Conditions Report.

Ski trail and ice fishing conditions are still good in the far north, but conditions have deteriorated in the southern two-thirds of the state. Ice on southern lakes and rivers is starting to melt and open water is attracting lots of waterfowl.

Geese and ducks are starting to pair up and defend breeding territories. Turkeys are displaying in fields, and mourning doves are in courtship.Many furbearers, including raccoons, skunks and opossums, have been up and moving around.

Maple trees have been tapped and steadily flowing with the recent warmup.

Consistent catches of perch were reported this week with some days only yielding small fish and others days seeing mostly keeper size fish. A few pike have been caught by anglers targeting perch. A few Fox River anglers were fishing off of the fishing pier at Voyageur Park as ice conditions deteriorated this week. Open water could be seen in the main channel at the beginning of the week with shore ice getting worse throughout the week. Anglers were anticipating getting out in boats soon.

With temperatures in the 30s-40s over the weekend heavy fishing pressure was seen in most Green Bay access points. Heavy atv traffic and warm temperatures are causing many of the access points to deteriorate quickly and standing water from snow melt on top of the ice making travel interesting. People spent much of Sunday afternoon pulling permanent shacks off the ice. With warm temperatures forecasted for much of this week I would venture a guess that most permanent shacks will be off by the weekend.

Anglers fishing Larson's reef out of Stone Harbor reported decent catches of whitefish. Most anglers came back with a limit or close to a limit for a day of fishing. Anglers fishing close to shore report catching a handful of whitefish in 12-20 feet of water. Standard slider rigs with minnow heads or tails catching most fish.

Only a handful of people were fishing out of Bayshore and Red River. Slow fishing was reported at those stops. A few walleye were reported caught out of Bayshore and Volk's Landing. Lots of fish were reported seen on electronics but few of those fish would bite. Very heavy fishing pressure continues out of Oak Ave. Anglers report catching limits of whitefish anywhere from 20-70 feet of water. Standard slider rigs tipped with minnow heads catching a lot of the fish.

Anglers report average fishing for perch out of Potawatomi State Park, with lots of little fish being caught still. Anglers using minnows catching a few bigger fish if they can get past all the smaller fish. Pike fishing continues to be slow. A few pike were reported being caught off of Bullhead Point by anglers using tip-ups. Pike anglers at the Sturgeon Bay Yacht Club report catching a few fish on tip-ups with the majority of the fish in the low 20-inc range.

Ice conditions are still favorable for fishing, with many anglers observed on local lakes in Marinette and Oconto counties. Fishing has been picking up with some anglers reporting decent catches of panfish.

Angling pressure on the Menominee River remains highest below the dam in open water. Anglers are targeting walleyes and brown trout with a few fish being caught. Open water has extended downstream a little to around the train bridges with ice remaining throughout the rest of the river downstream. The Peshtigo River saw light fishing pressure this week with no activity seen on the bay and only a couple anglers in the river fishing for pike with no luck. 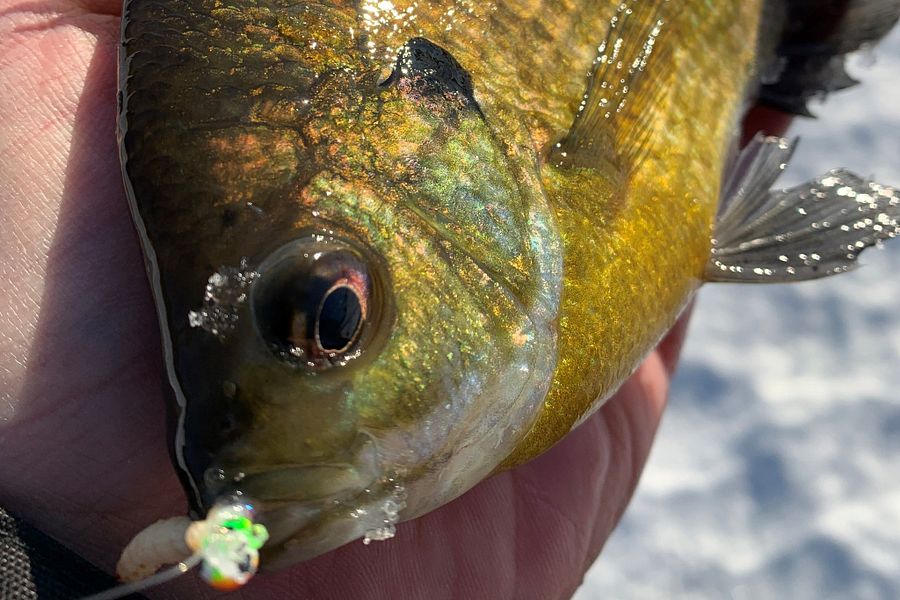 Anglers were catching a variety of panfish at Oconto Park II including rock bass, bluegills, and perch. Off of Park II to the south past Park I had moderate fishing pressure for perch, whitefish, and northern pike. A few pike were caught in shallow water while whitefish could be found in waters deeper than 15 feet. Whitefish were being caught in the Oconto Harbor in low numbers this week. Anglers reported seeing whitefish and a few walleyes on cameras but they were reluctant to bite. Geano Beach anglers were targeting perch and whitefish this week with spotty results. A few good catches of perch from mid-week were reported with lesser action toward the end of the week.

Fishing season is now closed until early May at Devil's Lake State Park, except for panfish.

Snow is quickly leaving the ground, and many furbearers (raccoons, skunks, opossums) have been up and moving around a lot with the warmer temperatures. A cool encounter with a leucistic raptor (likely a red-tailed hawk) was submitted this week. The giant Canada geese are staking out their territories on the ice on our pond at home. Tufted tit-mouse was singing loud and clear on Sunday morning in Columbia County. The cardinals are singing too.

Warm temps over the weekend brought in new geese and waterfowl into the area. Resident geese are starting to pair up and defend small breeding wetlands. Harriers, red-winged blackbirds, song sparrows and other early migrants are beginning to arrive in Dane County. Turkeys are displaying in fields, and mourning doves are in courtship along with House Finch and other early breeders.

The south winds and warm temperatures moved birds into the area. Sandhill cranes, Canada geese and red-winged blackbird all made an appearance. There have also been reports of killdeer and robin. Greater-white fronted geese can be seen in southern Dodge County in areas where the Beaver Dam River is open. House finch, cardinals and chickadees are all making their voices heard!

Waterfowl such as mallards and wood ducks have been seen pairing up for the breeding season and are utilizing open water from recent snowmelt. Canada geese continue pair bonding and will soon start laying eggs in nests on local wetlands. Chickadees have been heard singing their spring courtship songs, and some of the white-tailed deer bucks are still holding antlers.

Ice on area lakes and rivers is starting to melt while waterfowl are making their way to the open water. Maple trees have been tapped and were steadily flowing over the weekend with the warm temperatures and sunshine. Expect the sap to flow well over this coming week as conditions are prime. Trail conditions are poor and icy in many areas. Snowshoeing is not recommended.

The spring ritual of sap collection is underway in Marinette County this week. Warmer temperatures have prevailed, and the trees are reciprocating with steady flows during sunny weather. Warm days and cooler nights are essential for sap production. Conditions look great this week for maple sap collection.

There is still a good snowpack in northern Marinette county, with several feet in the forests off the trails, but the snow has been melting fast. There is now around 10 inches on the ground at Wausaukee. A thick crust on the surface in the mornings softens later in the day. Ice on some area lakes was 18 + inches thick, but much of it was cloudy ice. Conditions can change rapidly this time of year, so please use caution each time you venture out!

It may be warming up at Havenwoods State Forest, but winter is holding on. Some trails are muddy, and some are still icy. But red-winged blackbirds have arrived so spring should be on the way.

The snowpack is hard and crusty early in the morning and getting a little soft in the afternoon, making for typical spring skiing and snowshoeing conditions at Northern Highland American Legion State Forest. The sun has some warmth to it now, and some south-facing slopes are starting to show wear as well as snowmobile trails where they cross the roadways. Big puddles are appearing on area roads during the day, making for icy conditions at night for driving and walking. Some ice cleats are a must at this time of the year. Some songbirds are starting to sing!

Due to warm weather conditions, the ski trails at Copper Falls State Park are no longer being maintained and are open to all uses. The Waterfalls are about 75% frozen, making for some very neat photos! The trails to the falls are icy, so use caution. Four electric campsites are open for use on a first come, first serve basis.

We have been enjoying some very mild temperatures as we welcomed in the month of March. Although there is still plenty of snow on the ground and in the woods in the Brule River State Forest, both the wildlife and the area residents have definitely been appreciating the warm up. Over this past weekend, a skier on the Afterhours Trail system at Brule River State Forest observed and photographed evidence of a deer kill by wolves. It was on a portion of the newly-constructed Nebagamon Creek Trail. The trails were last groomed on March 2. Staff freshened up the skate lanes on the entire system, and the tracks are still in good condition. There are no bare spots on the trails, but some areas have thinning base and some tree debris. We still have about 1 foot of base and 2 feet of snow in the woods.

Winter snows are quickly melting, especially on the south and west-facing slopes of Castle Mound Pine Forest State Natural Area exposed to the afternoon sun. Now is a great time to walk the trails among the pines and sandstone outcrops and to listen for the first birds of spring.

Warmer temps have started to melt our snow load at Governor Thompson State Park, but you can still expect a foot or more of snow on the ground in the woods. Ski trails are still open but in spring condition (icy in the morning and soft in the afternoon). The snowshoe trails are seeing an increase in hikers enjoying the beautiful weather.

Trails are still icy and snow-covered at Devil's Lake State Park, with just a few bare spots in the sunny places. There are poor conditions for cross-country skiing and mixed conditions for hiking. Traction devices would be a good idea for shoes and boots. The park doesn't recommend hiking in winter conditions but does not prohibit hiking.

Trails are still icy and snow-covered at Devil's Lake State Park, with just a few bare spots in the sunny places. There are poor conditions for cross-country skiing and mixed conditions for hiking. Traction devices would be a good idea for shoes and boots. The park doesn't recommend hiking in winter conditions but does not prohibit hiking.