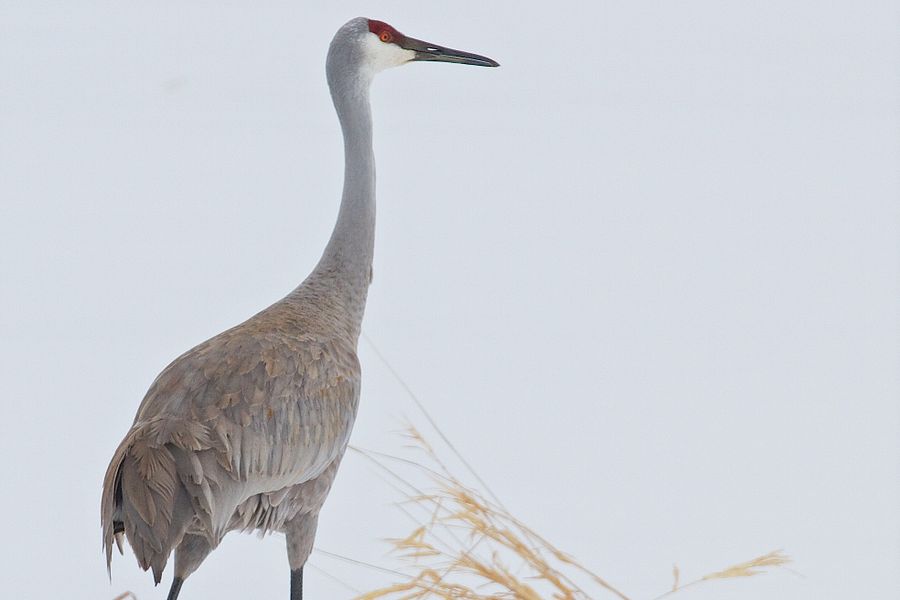 Last weekend's warm weather spurred some thoughts of spring! The end of winter is near. Anglers won't have to wait too much longer for an excellent late-ice panfish bite -- the ice around the edges of local lakes is starting to get thin, especially at the boat landings. Remember that ice fishing shacks need to be removed daily after March 8 south of Highway 64.

There is still plenty of snow up north for various winter activities, but winter recreation enthusiasts will have to deal with ice and crusty conditions. Snowmobile trails are in good shape in the northern third of the state on the travelwisconsin.com Snow Conditions Report. Cross-country ski trail conditions remain good to excellent in many locations. The sun has a little more warmth, so trails warm-up and may get soft before they freeze up again during the night.

Sandhill cranes and red-winged blackbirds are starting to be spotted, but snowy owls are still being seen, as well.

Many anglers could be seen out this week fishing for perch off Hook Road. Perch were being caught but many fish were too small to keep. On average one out of five were said to be of desirable keeper size. Sunset Beach Road anglers fishing near the mouth of the Suamico River were catching whitefish. Many schools of whitefish were reported seen on cameras but not interested in lures. Anglers reported catching most of their fish close together as a short period of high activity seemed to be the case. Low fishing pressure was seen this week at Long Tail Point with a few anglers chasing perch and pike with no luck. The Fox River had heavy fishing pressure at the end of the week with anglers fishing from Voyageurs Park down river to the 172 bridge. Walleyes were being caught in good numbers throughout the week on jigs and jigging raps with whole minnows or just the head. Numerous whitefish were also present over the weekend with reports from anglers seeing many schools on their cameras. Incidental catches of sturgeon and muskies were also reported.

Winter's grip has firmed up the ice on area lakes over the past month in Columbia County, but as always, no ice is safe ice, so check local conditions before heading out. The end of winter is near, and anglers won't have to wait too much longer for an excellent late-ice panfish bite. A string of recent warm days has reduced the snowpack and made walking conditions easier along area trout streams where the catch and release trout season remains open. A reminder that ice fishing shacks need to be removed daily after March 8. Current temperatures have thawed enough that some shacks are frozen in tight. Anglers might want to try to get them loosened up this weekend as they will have to be off by the following weekend. The ice around the edges of local lakes is starting to get thin, especially at the boat landings.

With the spring-like weather over the weekend heavy fishing pressure was seen at many locations. Anglers report good ice conditions but challenging travel with 6-8 inches of snow on top of the ice. With the warm weather and heavy traffic some access points were starting to get soft by the end of the day, with some ATVs having trouble getting off the ice in a few locations. Overall slow fishing was reported, with the most fish reported for one angler to be seven whitefish for a sun-up to sun-down sit.

Bluegill and crappie fishing is predominant on the lakes, with some northern pike activity. The short warm spell in the weather was an early sign of spring, but it has not stopped anglers from taking advantage of ice coverage on the lakes.

Fishing pressure increased over the weekend on the Menominee River with warmer temps. Anglers could be seen below the dam fishing for brown trout and fishing the backwaters by Mystery Ship boat launch for panfish. A few bluegills were being caught. Perch and northern pike anglers were out in low numbers this week at Red Arrow. Perch were less active than previous weeks but were still being seen. Northern pike fishing was best south of Red Arrow in the bay on the "flats". A few anglers were out on the Peshtigo River trying for northern pike, perch, and whitefish with no luck.

Anglers were scattered along the bay from shore out a couple miles searching for perch, pike, walleyes, and whitefish. Deeper waters were yielding some whitefish while perch were seen close to shore along the weeds. Steady fishing pressure was seen this week at the Oconto Harbor with anglers targeting whitefish, pike, and walleyes. Whitefish along with a few walleyes were seen on underwater cameras but were not very active. The best whitefish bite was happening in the first couple hours of the day. Some perch and whitefish were caught this week at Geano Beach with earlier in the week being better for perch. Tip downs with minnows were working for perch.

Anglers have enjoyed catching brown trout this winter on Devil's Lake. Still, everyone should be aware that the trout season on Devil's Lake ends with the regular gamefish season on Sunday, March 1. Anglers can soon focus their efforts on the late-ice panfish bite on area favorites like Lake Redstone, Mirror Lake, Lake Delton and Dutch Hollow Lake. A recent string of warm days has made for better walking conditions along local favorite trout streams such as Dell Creek, Honey Creek, and Bear Creek and the catch-and-release trout season remains open county-wide.

Anglers are having a tough time catching and finding fish on Lake Poygon. The only bright side is anglers have caught a few good-sized northern pike with tip-ups and a minnow. They have the best success in shallow areas with vegetation present.

The panfish bite has been decent on White Lake. Anglers have done best on the north side of the lake and should be aware of the special bag limits placed on this lake. Caution is needed when on the ice late in the season.

The dust is starting to settle on the 2020 sturgeon spear fishery on the Winnebago System and many folks are starting to ask how this season's harvest compares to years past. We are fortunate to have harvest numbers dating back to the 1941 season (80 years) for Lake Winnebago and the 1952 season on the Upriver Lakes that we can compare to results from this season. The 2020 harvest numbers (491 on Lake Winnebago and 320 on the Upriver Lakes) were very similar to the 2019 season (478 on Lake Winnebago and 307 on the Upriver Lakes). The difference between the two seasons is when the fish were registered. During the 2019 season, 31.9% of the fish harvested from Lake Winnebago were registered on opening weekend and only 11.9% were registered on the final weekend. The 2020 season, on the other hand, had 15.1% of the harvest from Lake Winnebago coming from opening weekend and 22.0% from the final weekend. The difference between seasons was largely due to improving conditions (both ice thickness and water clarity) during the 2020 season. Results from the 2020 sturgeon spearing season are also quite similar to the average over the past five years. Unfortunately, poor water clarity has impacted each of these seasons and each has gone the full 16-days. The average harvest over this time period has been 514 lake sturgeon from Lake Winnebago and 305 from the Upriver Lakes. When looking back through more spearing seasons, the Lake Winnebago harvest of 491 fish in 2020 ranks tied for 51st of all time.

Sandhill cranes are returning to the area. They've been reported in many locations after Sunday's warm south winds. Canada geese and mallards are also pairing up and visiting frozen breeding wetlands in anticipation of the coming thaw.

We still have snow on the ground at Council Grounds State Park. Wildlife is getting more active, and a variety of birds are out, letting us know our winter days are numbered. Birds include chickadees, cardinals, turkeys, pileated woodpeckers, and eagles. One lucky visitor watched an eagle on the north side of the park fly in and catch a rabbit for lunch.

Reports of Canada geese and sandhill cranes are trickling into the Horicon Marsh area. Some open water is appearing, and with next week's warm-up, expect to see some waterfowl such as white-fronted geese moving into flooded fields. Snowy owls are still being seen west of the marsh. A red-winged blackbird was also seen at a feeder in Dodge County. Spring is coming!

The warm weather of the past weekend spurred some thoughts of spring! At Northern Highland American Legion State Forest, there is still plenty of snow for all of the various winter activities, but ice and crusty conditions will have to be dealt with. The sun has a little more warmth, so trails warm-up and may get soft before they freeze up again during the night. Ice cleats are a must for outdoor walking.

Snowmobile trails in Columbia County are closed due to recent warm weather.

Pattison State Park's ski trails were groomed and tracked last Friday and are in excellent condition. There may be some track glazing with the recent warmer temperatures. We have around 16 inches of ski base with over 20 inches of snow in the woods.

Recent warmer temperatures impacted the snowmobile trail conditions in Kewaunee. Snowmobile operators only had a short period to enjoy the Ahnapee State Trail and trails throughout Kewaunee County, but the trails have since closed.

There was plenty of snow melt-off last weekend at Devil's Lake State Park, leaving a few small bare spots. Trails are still almost entirely snow-covered, but the snow depth is waning. If you choose to come walking, come prepared for snow, ice, slush, puddles and even some mud. Snowshoers and cross-country skiers might be able to do a bit of travel, but snow will be even more scarce if we get a day or two of temperatures in the 40's or higher.

Currently, all snowmobile trails have been closed in the Waupaca area.