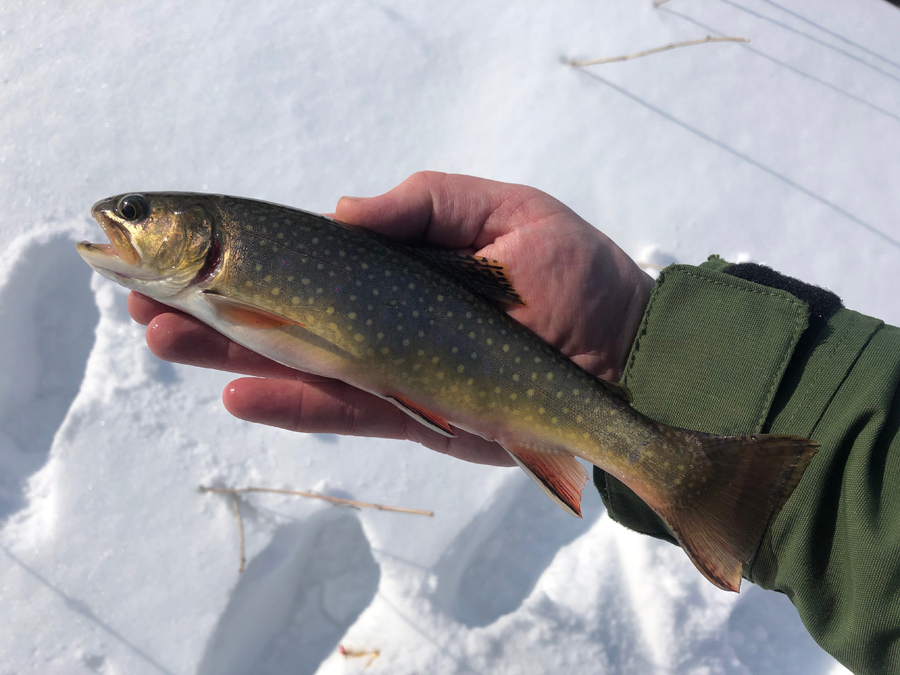 Snowmobile and cross-country ski trails are in good to excellent condition in many locations after additional snowfall early this week. Reminder to think smart before you start and ride responsibly.

However, recent snowfalls have made it difficult for those pursuing trout during the early season. The best luck might be before the major spring thaw begins. Before the cold front, warmer weather had improved ice fishing.

The 2020 sturgeon spearing season on the Winnebago System has been going as predicted. With variable ice conditions and the less than ideal water, there will be a 16-day season with a below-average harvest. Two fish over 140 pounds have been registered and 23 fish larger than 100 pounds.

Now is an excellent time to make sure those wood duck boxes are cleaned out and ready for the 2020 nesting season. Various species of woodpeckers are beginning to drum for breeding display on hollow wood. Cardinals have started signing in the treetops. Bald eagles are actively adding to their nests.

Bayshore Park and Dyckesville anglers report catching a few whitefish while trying for walleyes around dusk. Fish were caught on jigging raps. Anglers fishing during the day report slow fishing for both walleye and whitefish.

Chaudoir's Dock anglers report good catches of whitefish in 20-30 feet of water. Slider rigs with every hook tipped with a waxworm was the ticket. Anglers aat Rites Cove and Sugar Creek report catching only one or two whitefish for half a day of fishing. Small jigs tipped with waxworms or minnow tails catching the few fish seen.

Heavy fishing pressure was seen out of George K. Pinney County Park over the weekend with lots of anglers heading out to the reefs. Anglers fishing near shore report slow fishing for whitefish with only a few fish caught early mornings. Anglers fishing inside the harbor area at night report catching a few smelt. Pebble beach and Murphy Park saw some action from anglers over the weekend but no reports were taken. Memorial Drive and Sunset Park have open water or rough/thin ice at these locations.

Menominee River anglers were fishing below the dam on both shores and from Hattie St. bridge early in the week for brown trout. Fishing was reported to be slow with 1 brown caught for a half days effort. Good numbers of anglers were out trying for perch at Red Arrow Park with slow fishing seen. Most fish caught were too small to keep with four or five being the average number kept per outing. Anglers are now being seen in the bay to the south towards Little River fishing close to shore..

Anglers were starting to venture out from shore a little this past week with groups scattered down the shoreline. Whitefish and walleyes were being caught in good numbers around 20 feet of water. Northern pike fishing was slow however an increase in fish seen on cameras was reported. Anglers could be seen both north and south of the river at the Oconto Harbor exploring farther out from shore. Whitefish were being caught in low numbers with one or two being reported as a good day. Northern pike fishing was slow but has picked up a little in activity this past week with some fish being caught in the shallows south of the river. A few perch and bluegills were reported to be caught south of the river off the city park. A fair amount of fishing pressure was seen this past week at Geano Beach with anglers seen traveling off shore. Fishing with tip downs for perch was producing a few fish.

Recent snowfalls have made it difficult for those pursuing trout during the early season, but if you manage to venture out, there are plenty of fish to be caught. The best luck might be had before the major spring thaw begins, and the snow starts to melt. Just be aware of the early season catch and release regulations.

The panfish bite on the Chippewa Flowage still is very spotty. Some folks have honed in on active fish, while others are struggling to find them. Most fish are preferring live bait, but without the added active jigging by the person fishing. Find deep holes adjacent to points and structure. Walleye fishing is closed for walleye on the flowage until the May opener of the game fish season in 2020.

The 2020 sturgeon spearing season on the Winnebago System has been going just about as predicted. Given the variable ice conditions on Lake Winnebago and the less than ideal water clarity, DNR staff were anticipating a full 16-day season with a below average harvest. Through the first 12 days of the season there has been a harvest of 319 lake sturgeon from Lake Winnebago and 276 from the Upriver Lakes. Some large fish have been harvested during the season as well with two fish over 140 pounds being registered and 23 fish that have been larger than 100 pounds. The less than ideal conditions may have reduced the overall harvest, but the 2020 spearing season has still provided thousands of spearers a chance to renew the traditions of another sturgeon spearing season and reminisce about memories from season's past while creating new ones this season!

Migrating horned larks are abundant along roadsides, with some snow buntings in open areas. Now is an excellent time to make sure those wood duck boxes are cleaned out and ready for the 2020 nesting season.

Various species of woodpeckers are beginning to drum for breeding display on hollow wood, either natural or man-made structures. Cardinals as well have started signing in the treetops, particularly on warmer sunny days. Bird activity is, in general, increasing with breeding seasons coming and day length increasing.

At Havenwoods State Forest, visitors have reported observing bald eagles overhead and bluebirds at nesting boxes this past week. Deer and coyote remain active across the property.

A few gold and purple finches are visiting area bird feeders, as well as rabbits and squirrels. Wandering fox tracks on the landscape are indicating love is still in the air.

Cardinals and chickadees are beginning to sing, and bald eagles are actively adding to their nests. Trails are somewhat icy underneath the snow, but conditions are still OK for snowshoeing.

Before the cold front, warmer weather had improved ice fishing. Tip-up action and pan-fishing had been improving. The snowmobile trails are a bit icy, and we could use some snow to improve their conditions. It is a good time to shed hunt as most bucks have lost their antlers and are hitting food sources.

Four inches of newly fallen snow offer excellent snowshoeing and cross-country skiing opportunities at Yellowstone Wildlife Area. Northern shrikes have been sighted on the wildlife area, as well as other wintertime birds.

Manitowoc County currently has snow, and the snowmobile trails are open. Trails are in poor to OK conditions, riders are encouraged to use caution on plowed fields and areas where there was standing water. Circumstances will change quickly with any weather change. Riders need to check to ensure trails are open before riding here.

Anglers have been targeting panfish and walleyes on local lakes. The weather should be great to get out and enjoy the outdoors this weekend.

An additional 4-6 inches of snow fell on Monday night, leaving a total of 19 inches of snow on the ground at the Wausaukee Ranger Station. The snow is considerably deeper in the northern parts of the county. The days are getting longer now, and the sun more powerful. The snow will settle a bit every day now, and with cold temps mid-week, we may have excellent conditions for snowshoeing by the weekend.

Frigid temps have the lakes in much better shape for travel. The slush has gone down significantly. Fishing reports have slowed, but you can still find active fish if you are willing to be mobile. Area snowmobile and ski trails are in excellent condition, along with snowshoeing opportunities. Snow depths are still significant.

Multi-use, ski and snowmobile trails are in great shape at Lake Wissota State Park. We have plenty of snow on the ground and have a great base. It's time to get out and use the trails before the winter season is over!

We received about 3 inches of snow Monday night at Black River State Forest. All snowmobile trails are in the process of being groomed this week and should be in good shape for riding. Cross-country ski trails will be groomed as well, and we are expecting good conditions hopefully through the weekend.

The condition of the trails at Havenwoods State Forest is ideal for snowshoeing. Borrow snowshoes from the Nature Center!

Oconto County snowmobile trails are in good condition. The entire trail system throughout the county is open. Be aware there are some obstacles from the storm damage this summer, and some trails have been rerouted. Operate safely.

Southern Wisconsin has had consistent moderate to heavy snowfalls the past several weeks, but the warmer temperatures have not allowed that snow to stick around. Despite this, snowmobilers have had the opportunity to ride the Rock County trails intermittently throughout the winter season.

Three more inches of snow (on top of several previous inches) fell on Feb. 18, so there's plenty of snow cover at Devil's Lake State Park. You can cross-country ski, hike or snowshoe any of the trails that you choose. The park staff does not maintain the winter trails in any way. You may find it most useful to have hiking boot traction devices, skis, snowshoes, or just hiking shoes -- all on the same day on the same trail!

At Northern Highland American Legion State Forest, the grip of winter continues, and the forest remains covered in a thick hard blanket of snow. Snowshoeing is great; cross-country ski trails have a tough base with just a new dusting of snow. Variable conditions still appear to exist for ice fishing.